Review: In KRISHA, The Filmmaking Sizzles 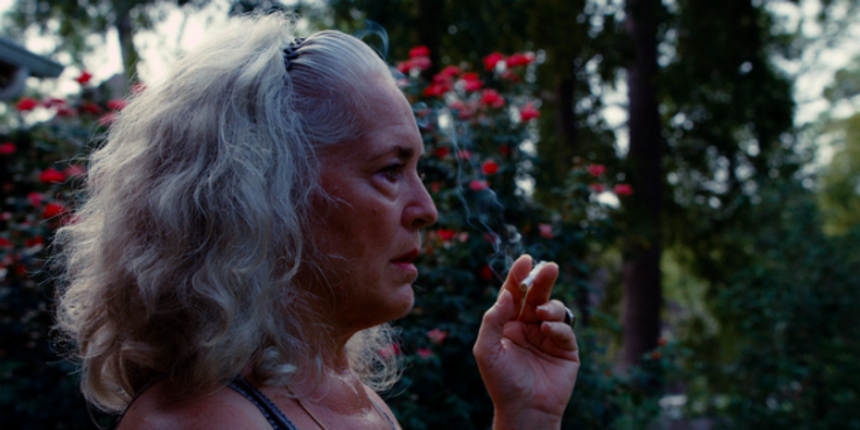 Jean-Luc Godard once said that all you need for a movie is a gun and a girl. With Krisha, a rich psychological thriller about family secrets, mental-breakdown and addiction, director Trey Edward Shults proves that one can make compelling cinema even bereft of the firearm. Sometimes all it takes is a turkey.

The film follows a day in the life of Krisha Fairchild, a recovering alcoholic who returns to her sister's house after a long absence to spend Thanksgiving with her family. Notably, the character of Krisha Fairchild is played by an actress named Krisha Fairchild. Her sister Robyn played by Robyn Fairchild; their mama by Grandma Fairchild; the house the very same. If you haven't already guessed, director Shults cast the film with members of his own family --some professional actors, most of them not -- all playing versions of themselves.
The story is fairly simple, but the filmmaking sizzles. Fairchild is one of the few professional actors of the bunch and the camera stays on her for nearly every frame, watching her as she sets out to prepare the Thanksgiving bird and repair withered relations with her family around her, showering particular attention on estranged nephew Trey (guess who plays him). Like that other firearm idiom, the plump turkey is the proverbial riffle on the mantlepiece; you know when entrusted to the fragile Krisha it won't end up on everyone's plates.
If a great deal of tension is wrung from the simple roasting of a fowl, a hell of a lot more is earned through cinematic verve. Real-life Shults has worked under Terrence Malick on several of his recent films, and the elder's influences show. The camera remains agile throughout, moving and swerving with the character in tow. 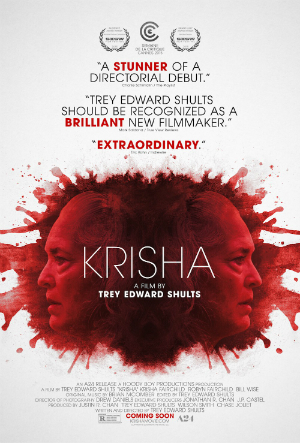 Unlike the misty dreaminess of his mentor, Shults' camera exudes tight control. He keeps his framing centred, and though the camera is often mobile --alternately following and leading Krisha through the house -- it never exhibits a hint of shakiness. The compositions are often dynamic in action and stiff in posture, giving the sense in the earlier scenes that no matter where Krisha goes, she cannot escape the overbearing unease.
Which is exactly the case. From a birds eye view, nothing much *happens* in the narrative. The big shoe-drop involves Krisha... drinking a bottle of wine. That's it. But what Shults gets so right is the way these small moments can take apocalyptic resonances.
Very few of us will be targeted by the Triads or left to diffuse a bomb --luckily so! -- and yet we can still feel the same nausea and nerve of those more fantastical situations in our everyday life. Family strain is always a potent motivator, then throw in addiction's grasp and secrets unsaid, and sure, add acute shame to pile and dear sweet lord, you've got the makings for a Dante-level descent into hell, all without ever stepping foot out of the well-appointed McMansion.
And so Shults goes through the director's toolbox, making choppy cuts and switching up the aspect ratios to help ratchet the disquiet. He leans heavily on composer Brian McOmber's score, all jangly and discordant notes, like some of the wilder stuff Lynch and Badalamenti cooked up together, chased with a hit of John Cage. He let's a long an loopy Nina Simone song play out in full, and darkens the brightness and raises the contrast as the story goes on, giving the film a kind of nightmarish sheen by its end.
So there it is. In this review alone we've cited Godard and Malick, and with the films all-in-the-family feel and tale of anguished collapse, Cassavetes and Polanski are not too far off. But its the director's first film! Give him a couple years, a few more Krishas under his belt, and who knows, perhaps Shults will become shorthand as well.

Review originally published during the Cannes Film Festival in May 2015. it will open in select theaters via A24 Films in the U.S. on Friday, March 18.