Destroy All Monsters: INDIANA JONES 5 Should Be About Short Round 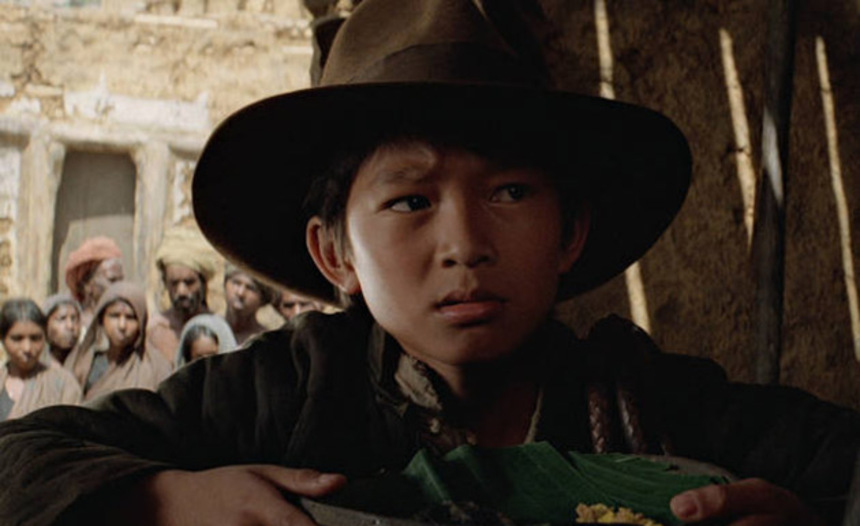 Here's some weird timing: I was already working up this week's column when today's news broke. Harrison Ford and Steven Spielberg will reunite for the fifth Indiana Jones movie, currently scheduled for 2019.

First of all, I'm perfectly thrilled with the announcement. Indiana Jones and the Kingdom of the Crystal Skull was garbage, but it was the kind of garbage with enough strength in it - Ford's performance, and some compelling ideas around the life of Dr. Jones in the post-nuclear world - that I'm more than happy to see the team take another crack at it, if only in order to redeem themselves.

Moreover, this is a great opportunity to do with Indiana Jones what Lucasfilm just finished doing with Star Wars: relaunch the franchise for a 21st century audience, in a new and compelling way.

To frame the discussion, let's look at three of the best films of last year: Creed, Star Wars: The Force Awakens and Mad Max: Fury Road. There have been a lot of decades-later revisions and relaunches of beloved pop cultural property from Generation X's childhood - so many so that the trope is in danger of becoming an ugly, automatic cash grab [cough Fuller House cough] - but I think most of us would find it fair to say that these three examples were among the best.

I say "revisions" as well as relaunches because in all three of these cases, a huge creative opportunity was seized by the filmmakers. The new films returned to what had exclusively been a narrative of white maleness, and redressed the representative balance through structure and theme.

Creed refocused its archetypal sports hero story on a young black man in 2015 America, when being a young black man is a particularly deadly proposition. Mad Max: Fury Road turned a post-apocalyptic wasteland where the rape and victimization of women was once, literally, an onscreen joke into a battleground for a person's right to choose what their body and life are for. And Star Wars: The Force Awakens, albeit in gentler, fairy tale terms, did both.

As I said, these films and many others represent an ongoing movement - the "reboot, reuse, monetize-their-nostalgia" movement - in cinema that is going to create unintentional, dangerous precedent. It's unlikely that the Powers That Be in Hollywood are insightful enough to take any valuable lesson from the success of Star Wars Episode VII, for example, other than "reboot more stuff, they like it!" The Indiana Jones news, for all the degree to which a fifth film has been discussed since the fourth one came out, seems like more of the same.

But we can hope that there are enough smart new filmmakers out there, like Coogler and Abrams, or wicked-smart old filmmakers out there, like Miller, that a few of the next projects in this trend will use the very real rocket fuel of nostalgia, not just to get whole generations of overgrown teenagers back into the movie theatres, but to show them something different and real in the process.

We don't know what Disney has planned for their continuation of the Indiana Jones franchise, other than what's reported above. No Chris Pratt as the man in the hat. Steven Spielberg, as powerful - and, importantly, inventive - a filmmaker as Hollywood has, overseeing the project once again.

We don't, admittedly, even know if Indiana Jones 5 is meant to be the permanent cap on the series, or if it will - like The Force Awakens or Creed - hand the hat off to a new series of films to be developed under the market-friendly original banner.

Now, at the end of the execrable Indiana Jones and the Kingdom of the Crystal Skull, Spielberg & company nodded in the direction of handing off the hat, in the personage of Indy's bastard son, Mutt Williams (Shia LaBeouf). Thankfully, Spielberg also had the sense to have Ford snatch that hat back before LaBeouf could do any serious damage to it.

Mutt Williams, of course, failed to connect with audiences as anything other than a monumental irritant. (LaBeouf's recent trek through increasingly-inspired performance art pieces may, admittedly, have gained him a bit of street cred.) I'd like to propose, though, that the Indy movies do what Creed and Star Wars have done: hand the stardom off to someone else.

And I'm proposing that that someone be Short Round.

Shorty was played by Ke Huy Quan (now Jonathan Ke Quan) in Indiana Jones and the Temple of Doom. An orphan from the streets of Shanghai, caught trying to pick Indy's pocket, Shorty quickly becomes the Indiana Jones equivalent of a gentleman's gentleman: sidekick extraordinaire, minder of Indy's kit, and keeper of Dr. Jones' conscience.

When the Shankara Stones sing of fortune and glory, Shorty's there to visibly remind Indy (and us) that there are a bunch of under-ten kids implicated in the Temple of Doom's fiendish plot. When Indy falls into the Black Sleep of Kali, Shorty is the one to scorch him out of it. He beats the shit out of the tween Majarajah so that Indy can escape the clutches of the German Mechanic Thuggee Guard.

Temple of Doom is, arguably, as much Shorty's adventure as it is Indy's - John Williams even supplies him a full-throated orchestral theme, called, appropriately enough, "The Adventures of Short Round." He even has a hat.

Now, I'm not proposing that Jonathan Ke Quan be rescued from obscurity to star in a new multi-hundred-million-dollar tentpole film (unless he wants to and is awesome at it). I'm only proposing that the character of Shorty, aged forward fifteen years and having lived in America since 1935, would make a hell of a lead character for a new cycle of Indiana Jones movies. He'd have the kind of lived experience that The Young Indiana Jones Chronicles were literally built on, between his adventures in Shanghai and, presumably, life in America during World War II, when American sentiment towards Asians did not exactly tilt neighbourly.

A Shorty in his twenties could easily co-anchor an Indiana Jones movie starring Ford as a pre-Crystal Skull Indy; or if we want to set Indy 5 after Indy 4 (fancy that!), and a mid-thirties Short Round is for some reason too old (although Jones himself, of course, was 36 in Raiders of the Lost Ark), we could jump to Shorty's own children. Maybe even a girl.

The point, though, is I hope fairly obvious by now: there's an opportunity to redress the representative balance in the Indiana Jones franchise, a series which (at best) is about white heroes with people of colour as sidekicks, and (at less-than-best), is occasionally pretty damn racist.

The "pretty damn racist" I'm referring to, of course, is Short Round's own Indiana Jones and the Temple of Doom.

But rather than striking Temple of Doom from the record (as Spielberg himself has tried to do), bringing Shorty actively back into the Indiana Jones fold is an opportunity to own, and re-vector, those mistakes.

One of the many things that I admire about Creed is how it plays absolutely fair with the entirety of its series' narrative collateral till now. Rocky IV is, arguably, the worst of the Rocky movies (unless you're into 45 minutes of unbroken training montage which, admittedly, some people are). Nonetheless, Creed is as serious about Rocky IV's place in the overall story - and the potential far-reaching emotional resonance of its events - as it is about any other piece of the Rocky saga.

Similarly, Indiana Jones and the Temple of Doom is probably no one's favourite Indiana Jones movie (even though sentiment has come around on it significantly over the course of my lifetime; it's certainly my second favourite). For all its good points, Indy II is a series of racist caricatures strung on a hook, of which Shorty is occasionally one.

But its greatest sin is its simplest: in recycling the archetypes of the Gunga Din era of filmmaking, Temple of Doom could have updated the racial and gender politics of its story, and chose not to. It remains a mark not just on Indiana Jones' career, but on Spielberg's - hence the subsequent disownment.

Nonetheless, all of its collateral is as viable a part of the ongoing Indiana Jones story as Marion, Sallah or Marcus Brody. And as with The Force Awakens, the casting of an Asian-American in the "young new hero" position of the start of a new franchise would allow Indy V to use the extraordinary energy of our nostalgia for the movies of our youth to propel some much-needed representative change forward in the landscape of pop culture.

In a week when key Asian figures in filmmaking had to remind Hollywood that they're part of the conversation on race, too, an Asian hero for a central franchise like Indiana Jones would be monumental. And if we layer on top of that the opportunity to repatriate Temple of Doom's treatment of race in a 1950-ish American milieu, which would allow maximum mileage on a story theme around race that we're nowhere near moving past even today, and I see great potential.

It lets the franchise work with itself to move the needle of how race is represented in blockbuster filmmaking, which is where that needle needs to move first and best if we are going to continue on our march towards a better-rounded (no pun intended) landscape of stories and heroes.

That, to me, sounds like a chance to close out Harrison Ford's tenure in the Indiana Jones franchise with as much class, warmth, and forward-looking power as his wonderful return to the role of Han Solo in The Force Awakens. And if this is to be the last time we see the man with the hat, what better send-off could Ford and Spielberg possibly cook up?

Do you feel this content is inappropriate or infringes upon your rights? Click here to report it, or see our DMCA policy.
CreedHarrison FordIndiana JonesIndiana Jones and the Temple of DoomStar Wars: The Force AwakensSteven Spielberg