Criterion In May: EASY RIDER, IN A LONELY PLACE, Wim Wenders Trilogy And More 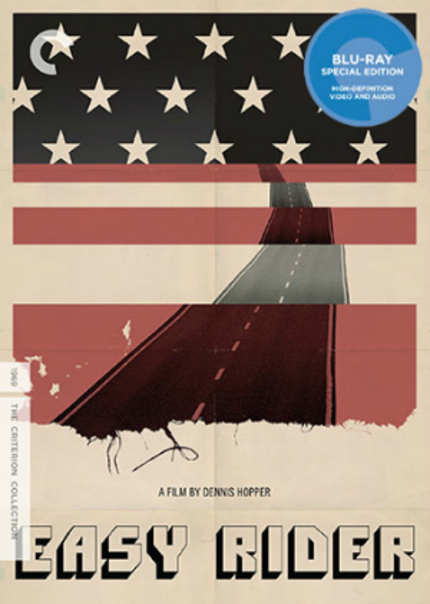 Get your motor running! In May, the Criterion Collection will blast out a key title in the American New Wave, as well as one of my favorite movies of all time and a trilogy of early films that formed an important element of the German New Wave. And more!

Sorry for the excessive exclamatory statements, but Criterion's release plans for May 2016 touch on several of my favorite nerves. The box office success of Easy Rider opened the eyes of Hollywood execs -- suddenly, they realized they had no freakin' idea how to appeal to younger audiences but young filmmakers might -- though it's Dennis Hopper's creative imagination that keeps it relevant today. The film has been released on Blu-ray from other companies in the past, but the Criterion edition has a restored digital transfer.

In Germany, Wim Wenders rebounded from his disastrous version of The Scarlet Letter to make Alice in the Cities and win widespread acclaim. He then made Wrong Move and Kings of the Road -- leading to the terrific The American Friend, which I wrote about last month -- and his trilogy of road movies should make for a terrific box set.

In a Lonely Place is a personal favorite, a film noir from which no light emerges. Humphrey Bogart stars as a tortured writer, which is probably why it connects so directly to my soul. Nicholas Ray directed.

Other titles include Kaneto Shindo's The Naked Island, about which I confess my ignorance, and Robert Altman's The Player, his inside-Hollywood movie that gave him a new burst of critical affection. Here's all the official verbiage from Criterion:

EASY RIDER
Blu-ray & DVD Editions
This is the definitive counterculture blockbuster. The down-and-dirty directorial debut of former clean-cut teen star Dennis Hopper (Blue Velvet), Easy Rider heralded the arrival of a new voice in film, one pitched angrily against the mainstream. After the film's cross-country journey -- with its radical, New Wave-style editing, outsider-rock soundtrack, revelatory performance by a young Jack Nicholson (Five Easy Pieces), and explosive ending -- the American road trip would never be the same.

SPECIAL EDITION FEATURES
• Restored high-definition digital transfer, supervised by director of photography László Kovács, with uncompressed monaural soundtrack on the Blu-ray
• Alternate 2.0 and 5.1 surround soundtracks, presented in DTS-HD Master Audio on the Blu-ray
• Two audio commentaries, one from 2009, featuring actor-director-writer Dennis Hopper, and the other from 1995, featuring Hopper, actor-writer Peter Fonda, and production manager Paul Lewis
• Born to Be Wild (1995) and Easy Rider: Shaking the Cage (1999), documentaries about the making and history of the film
• Television excerpts showing Hopper and Fonda at the Cannes Film Festival in 1969
• Interview from 2010 with BBS Productions cofounder Steve Blauner
• Theatrical trailers
• An essay by film critic Matt Zoller Seitz

IN A LONELY PLACE
Blu-ray & DVD Editions
When a gifted but washed-up screenwriter with a hair-trigger temper -- Humphrey Bogart (Casablanca), in a revelatory, vulnerable performance -- becomes the prime suspect in a brutal Tinseltown murder, the only person who can supply an alibi for him is a seductive neighbor (The Big Heat's Gloria Grahame) with her own troubled past. The emotionally charged In a Lonely Place, freely adapted from a Dorothy B. Hughes thriller, is a brilliant, turbulent mix of suspenseful noir and devastating melodrama, fueled by powerhouse performances. An uncompromising tale of two people desperate to love yet struggling with their demons and each other, this is one of the greatest films of the 1950s, and a benchmark in the career of the classic Hollywood auteur Nicholas Ray (Rebel Without a Cause).

THE NAKED ISLAND
Blu-ray & DVD Editions
Director Kaneto Shindo's documentary-like, dialogue-free portrayal of daily struggle is a work of stunning visual beauty and invention. The international breakthrough for one of Japan's most innovative filmmakers -- who went on to make such other marvelous movies as Onibaba and Kuroneko -- The Naked Island follows a family whose home is on a tiny, remote island off the coast of Japan. They must row a great distance to another shore, collect water from a well in buckets, and row back to their island -- a nearly backbreaking task essential for the survival of these people and their land. Featuring a phenomenal modernist score by Hikaru Hayashi, this is a truly hypnotic experience, with a rhythm unlike that of any other film.

THE PLAYER
Blu-ray & DVD Editions
A Hollywood studio executive with a shaky moral compass (The Shawshank Redemption's Tim Robbins) finds himself caught up in a criminal situation that would fit right into one of his movie projects, in this biting industry satire from Robert Altman (Short Cuts). Mixing elements of film noir with sly insider comedy, The Player, based on a novel by Michael Tolkin, functions as both a nifty stylish murder story and a commentary on its own making, and it is stocked with a heroic supporting cast (Peter Gallagher, Whoopi Goldberg, Greta Scacchi, Dean Stockwell, Fred Ward) and a lineup of star cameos that make for an astonishing Hollywood who's who. This complexly woven grand entertainment (which kicks off with one of American cinema's most audacious and acclaimed opening shots) was the film that marked Altman's triumphant commercial comeback in the early 1990s.

SPECIAL EDITION FEATURES
• New 4K digital restoration, with DTS-HD Master Audio 2.0 surround soundtrack on the Blu-ray
• Audio commentary from 1992 featuring director Robert Altman, writer Michael Tolkin, and cinematographer Jean Lépine
• Interview with Altman from 1992
• New interviews with Tolkin and production designer Stephen Altman
• Cannes Film Festival press conference from 1992 with cast and crew
• The Player at LACMA, a short documentary about the shooting of the film's fund-raiser scene
• Map to the Stars, a gallery dedicated to the cameo appearances in the film
• Deleted scenes and outtakes
• The film's opening shot, with alternate commentaries by Altman, Lépine, and Tolkin
• Trailers
• More
• PLUS: An essay by author Sam Wasson

WIM WENDERS: THE ROAD TRILOGY
Blu-ray & DVD Editions
In the 1970s, Wim Wenders was among the first true international breakthrough artists of the revolutionary New German Cinema, a filmmaker whose fascination with the physical landscapes and emotional contours of the open road proved to be universal. In the middle of that decade, Wenders embarked on a three-film journey that took him from the wide roads of Germany to the endless highways of the United States and back again. Starring Rüdiger Vogler as the director's alter ego, Alice in the Cities, Wrong Move, and Kings of the Road are dramas of emotional transformation that follow their characters' searches for themselves, all rendered with uncommon soulfulness and visual poetry.

ALICE IN THE CITIES
The first of the road films that would come to define the career of Wim Wenders, the magnificent Alice in the Cities is an emotionally generous and luminously shot journey. A German journalist (Rüdiger Vogler) is driving across the United States to research an article; it's a disappointing trip, in which he is unable to truly connect with what he sees. Things change, however, when he is forced to take a young girl named Alice (Yella Rottländer) with him on his return trip to Germany, after her mother (Lisa Kreuzer) -- whom he has just met -- leaves the child in his care. Though they initially find themselves at odds, the pair begin to form an unlikely friendship.

WRONG MOVE
Wim Wenders updates a late-eighteenth-century novel by Goethe with depth and style, transposing it to 1970s West Germany and giving us the story of an aimless writer (Rüdiger Vogler) who leaves his hometown to find himself and befriends a group of other travelers. Seeking inspiration to help him escape his creative funk, he instead discovers the limits of attempts to refashion one's identity. One of the director's least seen but earthiest and most devastating soul searches, Wrong Move features standout supporting performances from New German Cinema regulars Hanna Schygulla and Peter Kern and, in her first film appearance, Nastassja Kinski.

KINGS OF THE ROAD
A roving film projector repairman (Rüdiger Vogler) saves the life of a depressed psychologist (Hanns Zisschler) who has driven his Volkswagen into a river, and they end up on the road together, traveling from one rural German movie theater to another. Along the way, the two men, each running from his past, bond over their shared loneliness. Kings of the Road, captured in gorgeous com-positions by cinematographer Robby Müller and dedicated to Fritz Lang, is a love letter to the cinema, a moving and funny tale of male friendship, and a portrait of a country still haunted by war.

Do you feel this content is inappropriate or infringes upon your rights? Click here to report it, or see our DMCA policy.
CriterionDennis HopperNicholas RayPeter FondaRobert AltmanWim Wenders