Blu-ray Review: THE KID Is Born Again On Criterion Blu-ray 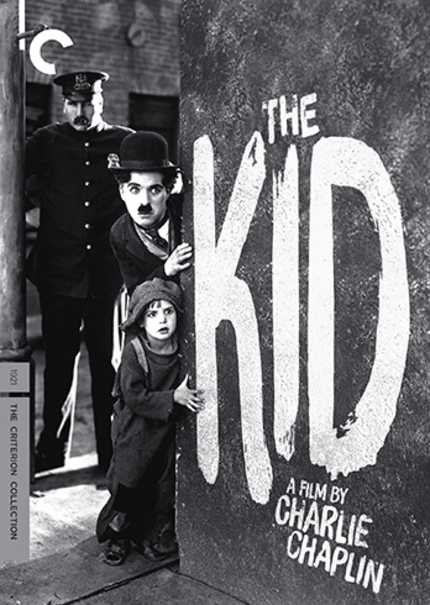 In 1921, The Kid marked a huge milestone in the career of the cinema's greatest clown, Charlie Chaplin. It was his coming out party, his graduation from two reel short films to full length features, and its success would decide the path that Chaplin would take in his immediate and long term future.
By this time Chaplin was already incredibly famous; his comedic shorts with both Chaplin and Sennett Studios had made him one of the biggest stars in Hollywood. He had yet to undertake the challenge of a feature-length film, however, and this challenge appealed to him.

Chaplin wasn't the first major star to take on a feature-length comedy, he was beaten to the punch by the legendary Buster Keaton's The Saphead, a film I reviewed on Blu-ray a few years back. The two stars took very different approaches to their films from the start, however, and that divergence seems to be the reason that Charlie Chaplin is still a household name one hundred years later and Keaton is mostly a hero of cinephiles.
It boils down to a very basic split in their primary goals, Buster Keaton was a gag man, he could run with the best stunt men and action stars of the day and his work remains astounding on a physical level to this day. Chaplin, on the other hand, was a story-teller who used the gags to punctuate his films, albeit in an exceptional and utterly memorable fashion.

The Kid marked the beginning of Chaplin's long career as a master story teller, not just a goofy character in shoes that were about ten sizes too big. His tale of a downtrodden wretch, The Tramp, caring for an abandoned child, The Kid, through thick and thin and the struggles and triumphs of their everyday lives together pulls at the heartstrings of grown men ninety-five years later while still managing to nudge giggles and belly laughs from children of all ages. The story is incredibly simple, well-drawn, and efficiently told, so that even at a rather slight sixty-eight minutes, it feels like a complete tale with a beginning, middle, and an end that wraps up the story exactly where it needs to.

I'll not pretend to be a Chaplin expert, or even an aficionado, but perhaps a simple fan. The only other film of his I've seen in its entirety is The Great Dictator. However, I am a great fan of Keaton's, and now having dug a tiny bit deeper into Chaplin's career and work, I can see just why he is the legend he is and The Kid is an excellent example of his ability to meld emotional truth and slapstick comedy in a way that does justice to both. I watched the film twice in preparation to write this review, the second time with my eleven-year-old son was by far the more enjoyable of the two. The universality and timelessness of these tales is testament to Chaplin's abilities as both storyteller and comedian, and I can't wait to dig even deeper into his catalog and discover what the world already knows.

The Kid is presented on Blu-ray by the Criterion Collection in an absolutely astonishing new 4k restoration that is one of the best I've ever seen. After having reviewed Criterion's restoration of The Apu Trilogy, the bar was set exceedingly high, however, this film, made three decades prior, looks even better. The black and white photography is impeccable and sharp as a tack, the restored mono soundtrack is beautiful and punchy, and the film looks like it could've been shot yesterday. It is truly a miracle of modern film restoration.

Not content to leave the beautiful transfer as the disc's only selling point, Criterion has stacked the disc with wonderful and engaging extras that contextualize the film for Chaplin neophytes like me. There is a scholarly commentary track from historian Charles Maland which is extremely informative not only in terms of providing scene specific anecdotes but also identifying major characters and performers in the film as well as noting recurring motifs and even performers appearing multiple times in the film. The track feels very well rehearsed and researched, which may not be everyone's cup of tea, but for a film like this, an academic approach is ideal.

There are a number of significant video extras on the disc, and to detail all of them completely would take forever, but I will pay special attention to those that I feel are the most worthy. My favorite supplement is a short featurette from silent film historian Ben Model titled A Study in Undercranking. This bonus feature details the historical use of undercranking, a term that refers to the practice manually cranking the camera at a speed slower than the film would be projected, in terms of its invaluable contribution to the gags of comedians in the silent era. Model dissects scenes from films by Chaplin, Keaton, and Harold Lloyd to determine how undercranking makes the impossible possible for these comedians in an age where you still had to make your movie magic by hand.

Also included are several extras more specifically tied to The Kid, rather than silent films in general. There is Jackie Coogan: The First Child Star, a video essay detailing Coogan's rise to fame that climaxed with his performance in The Kid. There are archival interviews with Coogan and co-star Lita Grey Chaplin in which they discuss details of working, and in Lita's case living with Chaplin during those early days. There are scenes cut from this version of the film, which was cut by Chaplin in the early '70s, that belonged in its original version in which The Woman (Edna Purviance) was a more prominent character. There are also a couple of archival shorts with Chaplin, one being newsreel footage of his first trip back to his native England after The Kid, and the second a privately commissioned short featuring Chaplin and Coogan made for the Douglas Fairbanks and Mary Pickford on their fabled estate, Pickfair. Round it out with an essay from Tom Gunning in one of Criterion's new fold-out style booklets.

The Kid remains every bit as heart warming today as it did ninety-five years ago and definitely deserves a place in the collection of any film fan.
Tweet Post Submit

More about The Kid