Criterion's THE GRADUATE, Plus Chaplin, Oshima, Troell, And More Coming In February 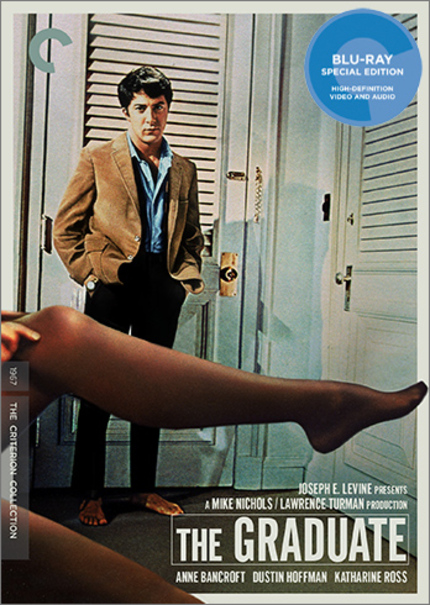 And here's to you, Criterion Collection! The home video company just announced its February 2016 slate of releases, topped by Mike Nichols' The Graduate.

Dustin Hoffman's star-making performance as recent college graduate Benjamin Braddock, who begins an affair with spiky family friend Mrs. Robinson (Anne Bancroft) for lack of anything else to do except contemplate his future, may have marked a turning point in modern cinema, but it's also an immensely easy movie to enjoy as a comedy of manners.

This edition includes a new interview with Hoffman, a new conversation between producer Lawrence Turman and screenwriter Buck Henry, and a new interview about editor Sam O'Steen. As usual, Criterion has gathered a host of interesting archival materials to go with the new 4K digital restoration, including a 2007 audio commentary featuring Nicholas and fellow filmmaker Steven Soderbergh.

Read on for all the details from Criterion's official statement:

DEATH BY HANGING - Blu-Ray & DVD Editions
Genius provocateur Nagisa Oshima (In the Realm of the Senses), an influential figure in the Japanese New Wave of the 1960s, made one of his most startling political statements with the compelling pitch-black satire Death by Hanging. In this macabre farce, a Korean man is sentenced to death in Japan but survives his execution, sending the authorities into a panic about what to do next. At once disturbing and oddly amusing, Oshima's constantly surprising film is a subversive and surreal indictment of both capital punishment and the treatment of Korean immigrants in his country.

THE EMIGRANTS/THE NEW LAND - Blu-Ray & DVD Editions
This monumental mid-nineteenth-century epic from Jan Troell (Here Is Your Life) charts, over the course of two films, a poor Swedish farming family's voyage to America and their efforts to put down roots in this beautiful but forbidding new world. Movie legends Max Von Sydow (The Seventh Seal) and Liv Ullmann (Persona) give remarkably authentic performances as Karl-Oskar and Kristina, a couple who meet with one physical and emotional trial after another on their arduous journey. The precise, minute detail with which Troell depicts the couple's story--which is also the story of countless other people who sought better lives across the Atlantic--is a wonder to behold. Engrossing every step of the way, the duo of The Emigrants and The New Land makes for perhaps the greatest screen drama about the settling of America.

THE KID - Blu-Ray & DVD Editions
Charlie Chaplin was already an international star when he decided to break out of the short-film format and make his first full-length feature. The Kid doesn't merely show Chaplin at a turning point, when he proved that he was a serious film director--it remains an expressive masterwork of silent cinema. In it, he stars as his lovable Tramp character, this time raising an orphan (a remarkable young Jackie Coogan) he has rescued from the streets. Chaplin and Coogan make a miraculous pair in this nimble marriage of sentiment and slapstick, a film that is, as its opening title card states, "a picture with a smile--and perhaps, a tear."

I KNEW HER WELL- Blu-Ray & DVD Editions
This prismatic portrait of the days and nights of a party girl in sixties Rome is a revelation. On the surface, I Knew Her Well, directed by Antonio Pietrangeli, plays like an inversion of La dolce vita with a woman at its center, following the gorgeous, seemingly liberated Adriana (Divorce Italian Style's Stefania Sandrelli) as she dallies with a wide variety of men, attends parties, goes to modeling gigs, and circulates among the rich and famous. Despite its often light tone, though, the film is a stealth portrait of a suffocating culture that regularly dehumanizes people, especially women. A seriocomic character study that never strays from its complicated central figure while keeping us at an emotional remove, I Knew Her Well is one of the most overlooked films of the sixties, by turns hilarious, tragic, and altogether jaw-dropping.

THE GRADUATE - Blu-Ray & DVD Editions
One of the most beloved American films of all time, The Graduate earned Mike Nichols a best director Oscar, brought the music of Simon & Garfunkel to a wider audience, and introduced the world to a young actor named Dustin Hoffman. Benjamin Braddock (Hoffman) has just finished college and is already lost in a sea of confusion and barely contained angst when he becomes sexually involved with the middle-aged mother (Anne Bancroft) of the young woman he's dating (Katharine Ross). Visually imaginative and impeccably acted, with a clever, endlessly quotable script by Buck Henry (based on the novel by Charles Webb), The Graduate had the kind of cultural impact that comes along only once in a generation.

SPECIAL EDITION FEATURES
• New 4K digital restoration, with uncompressed monaural soundtrack on the Blu-ray
• Optional 5.1 surround remix, approved by director Mike Nichols, presented in DTS-HD Master Audio on the Blu-ray
• Audio commentary from 2007 featuring Nichols in conversation with filmmaker Steven Soderbergh
• Audio commentary from 1987 featuring film scholar Howard Suber
• New interview with actor Dustin Hoffman
• New conversation between producer Lawrence Turman and actor-screenwriter Buck Henry
• New interview with film writer and historian Bobbie O'Steen about editor Sam O'Steen's work on The Graduate
• Students of "The Graduate," a short documentary from 2007 on the film's influence
• "The Graduate" at 25, a 1992 featurette on the making of the film
• Interview with Nichols by Barbara Walters, from a 1966 episode of NBC's Today show
• Excerpt from a 1970 appearance by singer-songwriter Paul Simon on The Dick Cavett Show
• Screen tests
• Trailer
• PLUS: An essay by journalist and critic Frank Rich

More about The Graduate

More about The Kid