Sundance 2016 Review: OPERATION AVALANCHE, For The Love Of Cinema 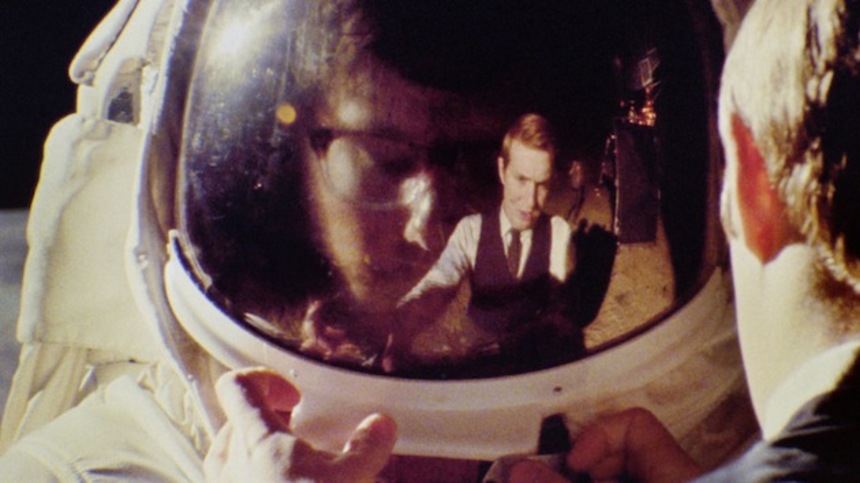 There is a lure to the film camera that is almost primal.

It draws you in, ever closer, a potent combo of machine and magic. Pressed against your ear, your cheek, the click-whir miracle of celluloid is god calling you home. It is your religion. This is the gospel of the camera buff. They may call you amateur. But you have drive and ambition. You see, taste, feel it, cutting at the Steenbeck, creating worlds, now becoming god yourself. Then there is the projector, with its great clatter, giving truth with light. And perhaps that truth isn't real. Perhaps it is just movie magic and obsession. Of a reel, and nothing more. Yet at times, the hope and joy that propels these projections is needed even more than truth itself. Such joy, such veracity for hope, step out into the spotlight and become the truth because they must. That is real, then, isn't it?

A precursor/primer for this review follows: In January 2013 Matt Johnson and his small team of filmmakers from Toronto arrived in Park City with their first feature The Dirties. A highly intelligent, hilariously bromantic school shooting faux-documentary, The Dirties took Slamdance by storm, winning top prizes there before going on to catch the eye of Kevin Smith, who helped release it to the world. As feature debuts go it is unique; lightning in a bottle. It is something that reads like it shouldn't even work and then draws you in with its sheer exuberance and ingenious meta filmmaking.

For those that have not seen it, The Dirties is streaming on Netflix. In the film Matt Johnson plays a high school geek named Matt Johnson who makes a movie with his friend Owen Williams (played by Owen Williams) about killing the school bullies who they have dubbed the 'The Dirties'. Not satisfied with their class movie, Matt wants to go one step further with the sequel. This time they will kill the bullies for real. They will walk into school and shoot them dead. They'll even wear t-shirts that say 'We are just here for the bad guys' so as not to scare everyone else. The Dirties's greatest strength other than disarming you with its film geeky sense of humor is that it is an acute study on mental health and what it means to be media obsessed, yet not media-literate.

Johnson and company's sophomore effort, Operation Avalanche, which premiered to a full house last night in Sundance's NEXT program, is essentially The Dirties 2.0. But how can you replicate lightning in a bottle? You can't. But you can build off of its character arcs, and mature its themes. Because as it turns out the movie about a school shooter wasn't the movie about the loss of innocence, it's this one, about the faking of the moon landing.

Again, Matt Johnson plays Matt Johnson. Owen Williams plays Owen Williams. Again, this is a faux-documentary. But this time, they aren't high school nerds in the 2000s, they're the best and brightest from top Ivy league schools, recruited by the C.I.A. in 1967 to form what is their A/V program. Determining that Stanley Kubrick is not in fact a Commie spy, the boys want to now spearhead the C.I.A.'s operation zipper, which will put men inside of N.A.S.A. to find the Soviet mole that seems to be feeding space race secrets to his comrades back at the Kremlin. Johnson believes that fellow agents posing as scientists will be seen coming from a mile away, so he proposes they go in as a documentary crew making a film about the Apollo missions for television.

Along with cameramen Jared Raab and Andrew Appelle -- who are, yes, shooting the very movie we are watching -- the boys begin their mission at N.A.S.A only to find out a much bigger and startling truth: They can't put a man on the moon in 1969. They don't have the tech. The best they can do is have a manned craft orbit our lunar body a couple times and come home. Even worse, it looks like the Soviets could get their first. This, they fear will result in losing the cold war once and for all on a basis of the people's morale.

Johnson doesn't miss a beat, deciding that he will take it upon himself to make a new mission, 'Operation Avalanche', in which the C.I.A. works with N.A.S.A to fake the moon landing. Because since the days of Georges Méliès and A Trip To The Moon, filmmaking and space travel have been inextricably linked. Yes, surely based on this kind of movie magic alone, this, the purest of fantasies, it will work. The astronauts will really go to space, they'll just feed back some video of an already filmed landing on a sound stage. But how do you fake the moon landing?

Joined by Agent Boles (played by co-writer Josh Boles), Operation Avalanche becomes a swinging little road movie, a 16mm home cam trip across the great 48, on the hunt for moon-like locations, with a stop off at Sheperton Studios, to unlock the movie secrets of the magicians behind 2001: A Space Odyssey. Like in The Dirties, the Johnson that we see here is an amateur filmmaker who takes the role of god in his production. The same kind of glee and tenacity which leapt across each frame in his first film is present here, but it is shaded by something perhaps even more insidious than that of a high school school shooter: Johnson is climbing the ladder. He is an obsessive, an egoist. He wants to become a company man of high mark.

What then when their little conspiracy making gets entangled in an even bigger conspiracy? Because if their faking of the moon landing fails, then the C.I.A. will shoot down Apollo 11, blame the Soviets, and most likely kill Johnson and company. Mystery men begin to show up outside their sound stage. The mole at N.A.S.A seemed to have never existed in the first place. Williams has no patience for this, he has a wife and young son at home. He lives in fear. Johnson's plan seems more insane than ever.

As the stakes get higher, the film gradually morphs into something much darker than first expected. At first a goofy story about a couple of upstart misftis giving something their all, Operation Avalanche then becomes a heady treatise on the end of the age of optimism, mirroring a wide breadth of American 60s cinema and the disillusioned society it reflected. This is where the need for joy and hope begins to outweigh the crushing reality of the moment; Where the lie makers succumb to even bigger lies.

This is also where Operation Avalanche becomes harder to describe and analyze without giving direct correlation to The Dirties, and even more so to film history itself.

This is also the part of the review, where, surprise, surprise, I reveal my bias towards Johnson and his filmmaking gang outta Toronto. I love what they do with aplomb. It connects with me on a very deep level, and they'd have to fuck up pretty bad to sever that connection. This is film geek to film geek kind of stuff, indeed. If you yourself aren't a cinephile than mileage may vary on just how much you enjoy Operation Avalanche, because about half my joy of watching this comes from knowing these guys are making a movie about movies; it comes in callbacks and inside jokes to The Dirties and the fabulously complex cinematic lineage Operation Avalanche is built from. This is meta-narrative at its most colossal and dangerous.

Is to be a movie lover then to wear rose colored glasses? And are we ourselves as critics, at the end of the day, more media-obsessed than media-literate and ashamed of it. Burying such shame in our reviews, we then cite that a movie like this is inspired by such eclectic works as RKO pulps, Roger Corman productions, Sydney Lumet movies, old newsreels, early Coppola docs, the actuality plays of Allan King and the anti-monoform works of Peter Watkins... and, yes of course, Stanley Kubrick.

We believe... I believe this kind of sheer information will save us... will save me from being found out as a fraud. The meta stakes are high. What does the mirror show me this time? That I am not writing this review for the sake of talking about a product's viability at a film festival and markets beyond. I am writing this review for myself. Into a vortex filled with fear and film. For all I can do is speak my truth... I am not really a critic, I am someone who writes about life by writing about film. This review is one written by a rambling man who grew up as a boy that used movies as a way to understand the world around him...

Operation Avalanche is a love letter to cinema, yes, but it is also a warning on the obsessive nature inherent in filmmaking, made by a collection of creators who can only counteract concerns that they've gone too far by going even further. What happens when you feel that you've all but lost that innocence of childhood, that will of pure imagination, that keen curiosity of the amateur to the hubris of the narcissistic ego? Perhaps all you can do is embrace it for merely what it is: the darkest spot on an infinite projection of light and shadow.

The message then becomes: Pick up the camera. Keep filming.