Slamdance 2016 Review: DRIFTWOOD, On The Strange Life Of Objects 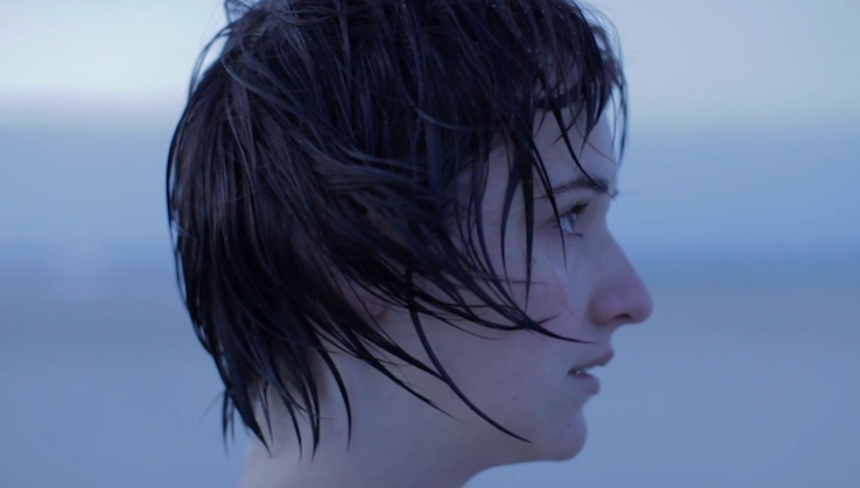 Against the onslaught of the crashing surf we arise into a world of soft, foaming white. From a distance, we can make out an approaching figure. Soon we see it's a she, a young woman, soaked to the bone, shivering on the shoreline. Is that desperation on her face or complete and utter awe at the living world around her?

Cut to the back of a jeep, and our young woman asleep, the jeep tumbling along through dappled late afternoon light. A middle aged man steps into the picture. He takes her home. He bathes her, clothes her, feeds her. She blinks. This is all completely foreign to her. She is like a doll, right out of the box. The man eats. She mimics his movements. She eats. She wets herself. She is a doll; a living object, devoid of agency, a blank slate. The man is her teacher. Her father. Her husband. Her captor. The man is God.

And so we're now entrenched in the beguiling world of Driftwood, Paul Taylor's debut feature. Along with his producer and editor Alex Megaro, their superb cast and troop of artists at Silver Sound studio, Taylor (who also lensed the film) creates a picture of such startling breadth and measured intensity that it is quite easy to forget there is not one line of spoken dialog during its entire running time. Driftwood is a bizarre and absolutely stark take on playing house, which would feel like experimental theater if it wasn't so damn cinematic. The film is domesticity distilled; with family roles deconstructed and reconstructed to their absurdly ugly and pristine root selves. It is man and it is woman as artifice, as mannequins on the stage of society, with nature as audience.

The man trains the young woman in domestic life. She tastes eggs. She tries things out: she opens doors, opens windows, picks up a knife. She cuts herself. She bleeds. Slowly but surely, she is learning. She learns how to cook eggs. She learns how to clean. She learns how to make iced tea. The man dresses her up in an old wedding dress. He gives her a ring. Puts on her face: lipstick, eye shadow, blush. She looks like a clown from the abyss. She looks ridiculous. They have a picnic. She chokes on champagne. She is his prize. Somehow, she knows this is wrong. She wanders away from home. The man is mad. The man finds her. At night, she is locked away in her room. The door is chained. The windows are barred. At night, the man watches old erotic VHS tapes of women on beaches. He dresses her in a black bra and laced panties. At night, he looks over a collection of photos, of parents; of a family lost. Perhaps she is his savior.

While Taylor's choice to not have dialog does, at times, feel on the verge of breaking down and exposing the film as a mere exercise, he always figures out how his characters will communicate in a way that makes sense in the world he's created. For the logic of Driftwood remains in a kind of brutish childhood, where a slap across the face is more of a resounding "No" than the word itself. By not choosing to allow the artifice of voice, Taylor is emphasizing on a philosophical level the great power that it can yield. If the man doesn't speak than the young woman will not mimic; she will not learn. Voice is agency. Your voice is identity. Or is one such path to it. While I don't want to outright spoil what happens at the half-way mark, it significantly broadens the scope of the film, filling in the rules and logic of this strange world in wonderfully intriguing ways, that also further plays into the god-complex and garden of Eden trope the film echos in various forms.

Paul C. Kelly as the middle aged man balances his authoritarian figure with a deep-rooted sadness. As the film plays out we begin to see his schizophrenic desire to be father and son, husband and lover all at once. The control he wields comes from fear and tradition, from a poisoned concept of family. Of what a man does; and what a woman does.

As the young woman, Joslyn Jensen makes her triumphant return to Slamdance, where in 2011 she starred in Without, another isolationist thriller of sorts. Mark Jackson's feature remains one of my favorite undistributed films, with Jensen's superb performance its big beating heart. As a screen actor she has remained relatively below the radar in the years since -- though she does have a starring role in Allison Bagnall's worthwhile Funny Bunny, which is now on VOD. Driftwood is a decidedly different animal, of course. Her performance here is one of the most intriguing and unique turns of our young year, perfectly capturing the purity of an emerging human -- much in the same way Scarlett Johansson did during Under The Skin's post manhunting domestic chapter. Each ensuing gesture and action she takes creates a stronger agency towards a defined self. A self who seeks independence. It's mesmerizing stuff to be sure.

While Driftwood will not be for everyone, it is a film that is hard to deny for its quiet ambitions and constant curiosities. A Grimm's Fairy Tale framed as a post-Bergman chamber drama, the film's splendor is found in its structural simplicity and keen sense of social absurdity. Taylor's philosophical temperament and sensibilities as a filmmaker has far more in common with the recent Greek Weird Wave than most current American Independent fare, which often feels bogged down in an unappealing hipster malaise. That is then one of half a dozen reasons to champion the film.

Another reason is that it has one of the absolute best penultimate shots I've seen in a film in a long time, with an ending that pretty much makes me question everything I just saw. Yet the ending also reaffirms the whole experience in a truly exhilarating way (imagine that!). It is quite easy then to say that Driftwood comes highly recommended as a film to keep an eye on this year.

Driftwood Trailer from pault on Vimeo.

Do you feel this content is inappropriate or infringes upon your rights? Click here to report it, or see our DMCA policy.
alex megarodriftwoodjoslyn jensenmichael fentinpaul c. kellypaul taylorsilver sound studioSlamdance 2016slamdance film festival