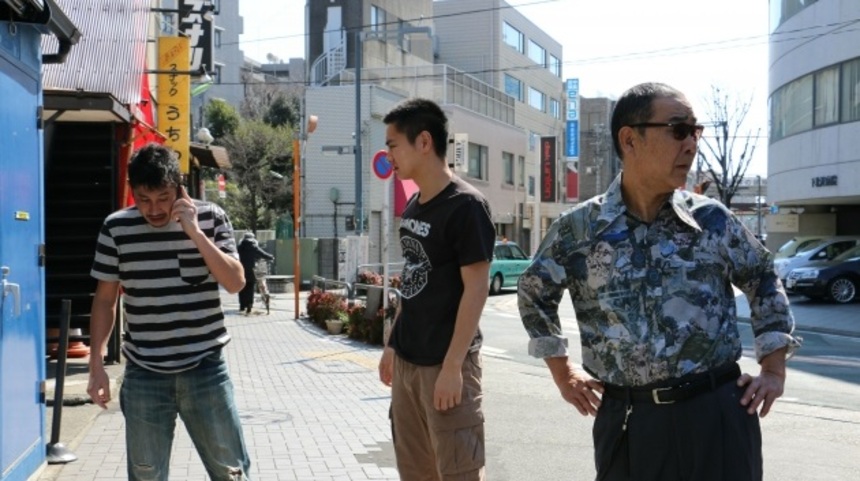 In Uchida Eiji's new film Lowlife Love, we get a nasty peek at the underbelly of the Japanese independent film scene. These are not the indies with a low budget, these are the indies with no budget, often made by people who revel in the attention and sex it gets them.

In the film, Tetsuo is such a no-budget director, who basically swindles his way through life. At 39 years old he still lives with his parents, and what little fame he has is based on one small success decades ago. For him, filmmaking means surrounding himself with students and talentless actresses, abusing them mentally, financially and (if pretty enough) sexually.

Then one day, Tetsuo gets two new wannabees added to his group of followers to fleece: a writer called Ken, and an aspiring actress called Hiromi. In one of his less-dim moments, Tetsuo realizes a double miracle has landed in his lap: Ken has written a damn good movie script and Hiromi has the charisma necessary to play the lead. Smelling a chance at finally directing something worthwhile, Tetsuo starts gunning for quality, even if that means pissing off all the talentless followers who had been promised roles already in return for copious amounts of money and sex.

But there is an even bigger danger lurking around the corner: Tetsuo's newly found enthusiasm attracts the attention of other filmmakers... who are all at least as crafty, filthy and bitter as Tetsuo is.

Shibukawa Kiyohiko is great as Tetsuo, a human slug of a man whose backbone only pops up at some unfortunate moments. You can laugh at his antics or be disgusted by them, but there is an ever-present tragedy in that you can always spot the better man he could have been.

In fact, everyone is pretty great in the film, and Uchida Eiji is a good director who knows how to frame a picture, which easily puts this over 90% of the general current output in Japan.

But what is on display here is pretty ugly. Uchida Eiji wrote the script and based it on his own observations and those of people he worked with. Having lived a big part of his life outside of Japan, he noted that while abuse happens in film industries worldwide, the no-budget scene in Japan was particularly misogynistic, to a shockingly extreme level. One of the taglines of the film is that all directors and producers are lowlifes, and the film shows that. The only way they can function is because both they and their victims love making movies, and the film shows that as well.

One actress in the film, honest when drunk, states that everyone in the business is "crafty, filthy and bitter... and annoying". In his film Uchida Eiji definitely reflects and condemns the first three of those "qualities". Whether you find it annoying as well may be dependent on your threshold for watching endless omnipresent abuse.

In the end, Lowlife Love is good, though not as great as Uchida's previous film Greatful Dead. Granted, that film was pretty awesome and left you feeling kicked. Whenever Lowlife Love touches you, it leaves you feeling slightly soiled.
As was, no doubt, fully the intention.


(A note for honesty and completeness' sake: last year, director Uchida Eiji and producer Adam Torel, both seen in the picture below, began a crowdfunding campaign to help finance Lowlife Love. Having known Adam Torel for years as an advocate for Asian cinema through his label Third Window Films, I decided to contribute to the campaign, and as such my name can be found on the end credits of the film. I do not profit in any way, shape or form from the film's financial success or failure though.)