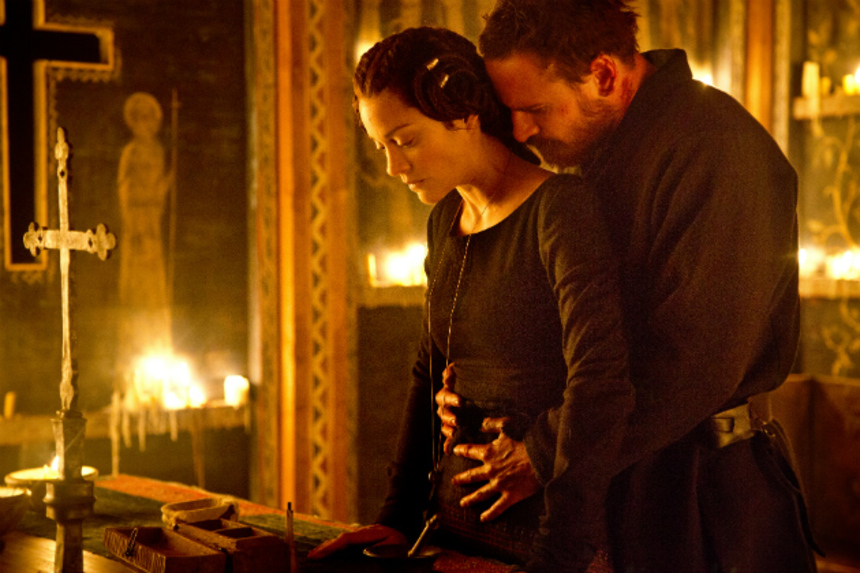 Justin Kurzel's Snowtown was a remarkable film, a brash feature debut that signaled the emergence of a unique talent joining a slew of them coming out of the Australian independent scene. Following up a powerful true crime story with a certain Scottish play may seem like quite the oblique turn, but to Kurzel's credit he injects his telling of the Bard's tale with a similar sense of dread and cool, calculated violence that made his previous work so effective.

Macbeth is the story of...well, if you don't know what it's about by now, you've clearly skipped a few English classes. Broken down to its core, this is the tale of a soldier who is fated to be king, or at least is delusional enough to believe that this is the case.

We're introduced to the soldier in full battle glory. Exquisite slow motion photography allows for a poetic portrayal of the battle; mud flies and black blood streaks down the faces as the armies clash. Yes, this is Shakespeare for the Game of Thrones set, and before many of the iconic lines of dialogue are even spoken we're thrust into this torturous medieval hellscape.

Michael Fassbender's wild eyes and compelling vocal cadence makes for a brilliant bit of casting. As portrayed in this version, Macbeth is nutty with a kind of PTSD, his murderous rampages resulting in not being able to give up the battle when he returns home. Marion Cotillard plays his wife, and despite performing in a language not her own and her diction shaped by a Scottish brogue, her acting chops are exemplary. The film portrayal goes out of its way to underplay some of the more iconic moments; the "dagger before me" scene is a somber kind of hallucination, the "unsex me" soliloquy played with pleading assurance by Cotillard.

For hundreds of years these key scenes have echoes on the stage, as well as numerous film adaptations (including iconic iterations by Welles and Polanski, as well as Kurosawa's twisted Throne of Blood). What sets this version apart is the way that Kurzel makes for moments of real intimacy during these more profound scenes, taking a highly cinematic tack versus what normally amounts to playing to the back of the stage.

Yes, the film is reduced to its core beats, and purists may balk at some of the simplifications. Still, as a visual and linguistic presentation, the film holds its own with the spirit of the source material. The grimness of the tale is palpable, and there's a genuine sense that Macbeth's demons are well realized.

In terms of cinema, most of the more over-the-top speechifying is reduced, and even the witches become more like phantom specters than the Greek chorus they serve for much of the play. Once again, these choices are all perfectly suited to this particular telling, and it's both unique and refreshing to see the combination at work here, in a film attempting to carve its own way while still adhering strongly to Shakespeare's vision.

A definitive telling of Billy S's play this may not be, but as an entertaining and effective variation upon them, it's a remarkable work. With visuals as dark and brooding as its titular character, and performances equal to the task of bringing the bard's words to life, Kurzel's Macbeth stands well alongside its peers while very much carving its own path.

Review originally published during the Cannes Film Festival in May 2015. The film opens in select theaters in the U.S. on Friday, December 4, via The Weinstein Co.

Do you feel this content is inappropriate or infringes upon your rights? Click here to report it, or see our DMCA policy.
Justin KurzelMarion CotillardMichael FassbenderPaddy ConsidineShakespeare