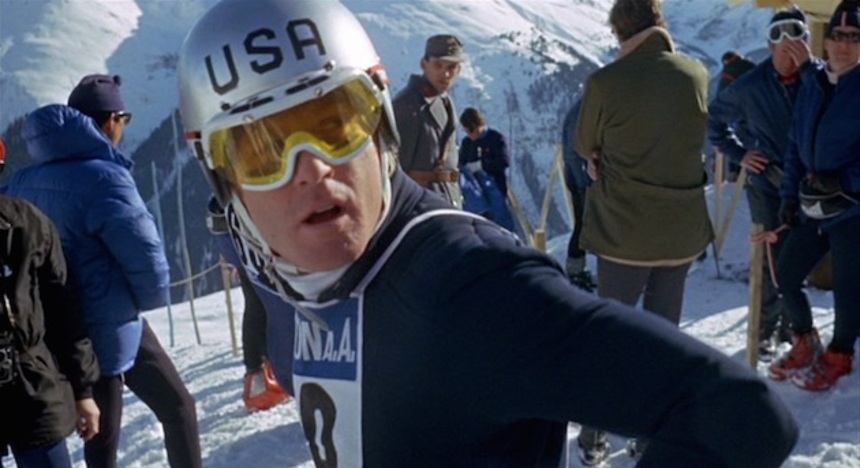 Here's what the Criterion Collection is good for: equal parts enshrining of significant milestones in the art of film (see last week's review of Ikiru), and the championing of striking works of filmcraft that have somehow slipped from the narrative of classic works.

Such a film is Michael Ritchie's 1969 film Downhill Racer, a movie you'd be forgiven for not having heard of. In the anti-hero, anti-establishment thunder of the American films of the late '60s and early '70s, Downhill Racer got lost, despite starring Robert Redford (straight off Barefoot In The Park) playing an arrogant and calculating athletics star who isn't necessarily much more of an asshole than the more popular alpha males of the era (Popeye Doyle, Clyde Barrow, and Hawkeye Pierce among them).

But boy, Redford's David Chappellet is certainly an asshole. Cocky and cold, a country bum whose every move is a simulation of the more refined social behaviour around him, Chappellet is good at exactly one thing - skiing - and recklessly disinterested in proving that he's as good as he thinks he is, to anyone other than himself. Earning a spot on the American ski team thanks to a gut-lurching accident by one of the other skiers (the crashes, tumbles, and falls in this movie are a far cry more astonishing than anything you will find on FailArmy's YouTube page), Chappellet flat-out refuses to race his first time out because he's unhappy to have been seeded near the back of the pack. Finally deigning to take to the slopes on round 2, he handily demonstrates his prowess, but the blurry line between skill, ambition, and circumstantial luck shifts constantly throughout Downhill Racer's taut 101 minutes. The final sequence pointedly challenges the credit of his wins.

If you'll excuse the metaphor, Downhill Racer loses speed on the straightaway - the dramatic scenes between winters aren't nearly as compelling as any sequence set on the mountain, whether that sequence involves skiing or not. Director Ritchie seems to be in his element on the slopes, in the chalets, and staring out at the dark, brooding towers of steel-blue rock.

The action photography nicely mimics the tropes of sports coverage while pushing the camera even more viscerally into the action. A late-film ski crash actually overtakes the cameras recording it, a startling disruption of the fourth wall that will make you jump in your seat. As for the races themselves, captured in choking whip-pans and white-knuckled POV shots, they make the skiing sequences in On Her Majesty's Secret Service - released the same year, and no small potatoes in its own downhill scenes - seem like it was filmed in slow motion.

Criterion does a great job of pulling detail into the frame in their Blu-ray presentation, transferred from of one of the film's master positive prints. Colour definition is sharp and absorbing throughout, but particularly so in the first act: a stylish and bracing opening credits sequence nearly seems to leap out of the screen at you, and the evening hues of Chappellet's arrival in Europe are deep and inviting.

Supplementing the film presentation are two sets of interviews. The more interesting piece features Redford and screenwriter James Salter discussing the conception and themes of the film. Redford, terrifically sharp and well-spoken, evinces a nice cynicism about America's "winning" culture, which drove him to create this story about how no one actually cares how you play the game. The second interview segment features the film's editor, production manager, and technical adviser - the latter a former American downhill racer up-jumped to the film world right when he was on the shortlist to go to Vietnam.

Michael Ritchie, who died in 2001, gets voice on the disc as well, thanks to audio segments from an AFI interview conducted in 1977. They're generalist in nature, but offer good insight into his experience in the film world, particularly in working on projects with high-powered triple-threats like Redford. Finally, a Paramount promotional featurette about Downhill Racer from 1969 - back when skiing was "America's fastest-growing winter sport!" - is included as well.

So stylishly visualized that I had to restrain myself biting the edge of my TV like chunk chocolate, Downhill Racer was a refreshing surprise and a keen addition to my collection. Strongly recommended for fans of sports movies, and particularly fans who think mainstream sports movies miss the point entirely.