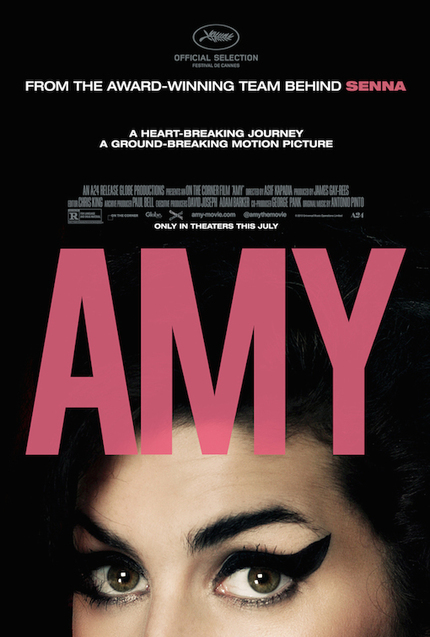 Whether people like it or not, the documentary Amy does tread a very fine line. Arguably one of its key themes focuses on the star's despair at having her privacy and personal life invaded by the press, but nevertheless Amy Winehouse's record company, her estate and Asif Kapadia have decided that some of her most personal details should be shared with the public.

Fortunately, reception of the film has been incredibly positive to date, and the execution of Amy as a film made up entirely of archive footage certainly is exceptional.

Unsurprisingly, the eponymous protagonist of this biographical film is certainly exceptional too. She exudes her ill-fated brilliance in almost every scene, and no doubt this is also partly thanks to the skills of the filmmakers. The remarkable, international appeal of this doomed chanteuse has also seen Amy go on to have remarkable success at the documentary-unfriendly Cannes film festival, and is also winning remarkably loyal audiences across the globe.

So ScreenAnarchy took the opportunity to speak to the documentary's producer James Gay-Rees, in an attempt to find out more about how this film came into being and how the crew handled some of the film's more difficult ethical issues.

ScreenAnarchy: What first attracted you to telling Amy's story?

James Gay-Rees: I wasn't a massive Amy Winehouse fan beforehand, to be honest. It was really an instinctive, gut reaction. When I was asked the question about whether I'd like to make a movie about Amy Winehouse in the vein of Senna, my answer was immediately yes, just because it was her. Whilst I wasn't a massive fan, I was very aware of the story and I suspected there was more to it than I expected. So I guess really that was it.

In your film, Amy talks about never being able to perform a song she couldn't personally relate to. Was there something in Amy's life which you could particularly really relate to when researching?

I honestly think it was the fact that she was such a genuine star. She just really was one of those people who naturally had that star quality. That sense of her charisma just clicked with me, and I just found myself thinking, oh my god, she really was the real deal. I suppose she was never going to make it out the other side as a result either. And that sort of element of the human condition which you could see in Amy is really what it's all about.

How hard was it to get the people you spoke to in this film to participate?

Honestly, it was very hard. Some people like Juliet took a year to convince to come on board. Even then, though, when she first came to see us she literally physically couldn't speak. She so badly wanted to say what she had to say, but she just couldn't trust anybody to make the right movie.

And how daunting has it been to be involved in a project where both those involved and members of the public have been so invested in the story?

It's been brilliant working on a film that's received such a strong reaction. It's so rare to get that with the stuff you make. That said, when you get "the Amy Winehouse" movie gig, you don't want to be the person who fucked it up. That really does keep you up at night. Like every night, for a year.

So how do you approach working on biographical archive films like Senna and Amy?

The way we work is there's basically three of us: myself, the director and the editor. Asif's the director, so he's the boss of what we're trying to achieve artistically. Then Chris is the editor. He's a very strong, opinionated character, and the real genius who manages to seamlessly stitch the archive material together. That's a really hard thing to do, but he's just really strong on story-telling, whilst Asif's got great instincts, Asif comes up with the great ideas, whilst Chris gets us from A to B and C to D.

We do all spend a lot of time sat together in the editing suite, though, and just watch hundreds of different cuts. If you see one thing that you feel particularly strong about, you then try to convince the other two and just try to win that battle. Sometimes you do have to let things go though.

Is there anything you really regret letting go in retrospect?

Good question... Erm, no, not really. I think you always arrive at the right decision in the end, or you convince yourself that you did (or even that it was your idea in the first place anyway). It's so hard to remember now though. I'm not avoiding the question, it was such a long time ago. We fought over so many things, really. I just genuinely can't remember what we were arguing about. It was too complicated a process, I guess.

How soon after Amy's death in 2011 did you decide to start working on this film?

We started this in 2013, literally January 2013. We were just all available, and keen to start getting on with making it, whilst it was all still fresh. Plus, if we'd waited another five years or whatever, Amy's legacy might have disappeared or the project might have even been given to somebody else. I mean, I suspect she would have still had as potent a draw in five years' time, but you never know. Also we wanted to make sure people remembered the level of media madness there was at that time too.

And what made you decide now was the right time to release Amy?

With Cannes you pretty much have to release soon after launching there. But we probably would have done our theatrical launch in June even if we hadn't of been selected for Cannes. I mean, you've only really got to look at the rest of the film calendar, there's no spaces left. There's Spectre, The Hunger Games and Star Wars, so it would have been impossible to get onto a screen at any other time. We at least managed to get the film onto some 250 screens by releasing the film when we did, which was great.

To shift the focus slightly, would you agree that one of the central themes to your film is illustrating the fact that Amy hated the limelight?

Yeah, I think she had really chronic self-esteem issues, because she felt abandoned or worthless. Therefore she didn't like attention, she didn't want to be told she was great or given awards or anything. She just kind of wanted to do her own thing.

I actually think she was quite serious about wanting to have been a roller-skating waitress. Or she would have loved to have just gotten married. She was quite often saying, I know I can sing, but I'd rather just be a mum and a wife, you know?

So do you think Amy would have wanted this film to have been made?

So how do you rationalise making it to yourself then?

Because I think that actually if she... I think the legacy of the film will be that it re-introduces her to a whole new audience. To new fans, obviously, but it also reminds people just what an amazing talent she was. So I don't think we were just trying to dwell on certain aspects of her life for the sake of it. I think we try to explain it and put it into context. And we do remind people what an amazing talent she was.

I hope that if she might not have liked the attention, she could at least have appreciated that. Some of her friends have said that they thought she would have it, her dad said she wouldn't, so...

Will you concede that you do to some extent garner fame from making this film, and that can seem problematic?

Yeah, I think people do fall victim to that. I think it's very difficult when there's lots of money at stake, and people do make really bad decisions sometimes. Not always, though. When there is lots of money flying about in the movies, people's perceptions do get skewed though. Sometimes your judgement can go out the window, just not always.

I remember walking out of one recording session hyperventilating, thinking to myself, what are we trying to achieve by telling this story? Will we be able to achieve anything? It's really hard with these kinds of films. But I just think you have a duty to what you think is the bottom line, you know? It's just all about respecting boundaries in the process. The truth was much worse than what you see too. We just couldn't make a film that fully reflected that, it would have just been unwatchably sad, and I actually think that would have counter-productive too.

My wife did even say that she thought some of the photos we included were too much, and I did relay that to Assif. But he was adamant that we had to have them in. His argument was she was one of the most famous people in the world at that time, and people should be asking themselves why she was left to be on her own in that state at 4am; and I do think he has a point really.

Do you think the film was of value to the people in your film, and that she might have valued that?

Yeah, with Nick Shymansky, for example. He has been in therapy for years since Amy's death. In fact, so many of the people we spoke to seemed so damaged by what happened. It was the weirdest thing with Juliet too, because she needed to get out what she had to say so badly, but she'd kept it locked down for so long... I do think the film may have helped them to some extent. Especially for Nick, Juliet and Lauren, because they feel like they had been written out of the story. The process was a bit like group therapy sometimes. It was cathartic in the end I think.
Tweet Post Submit

Do you feel this content is inappropriate or infringes upon your rights? Click here to report it, or see our DMCA policy.
amyamy windehouseasif kapadiadocumentaryinterviewjames gay-rees