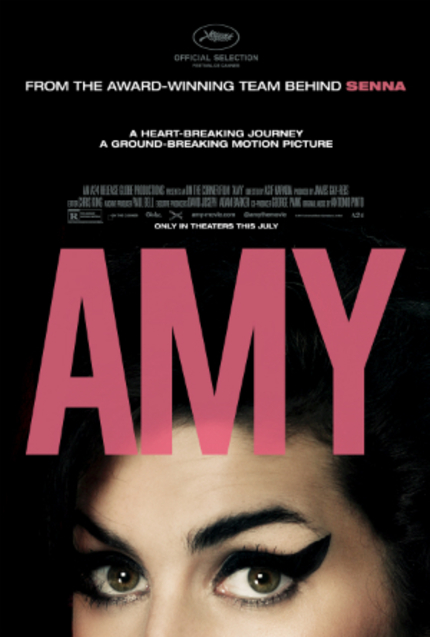 Every so often a film will come along that redefines an entire genre of cinema. A film that excels so completely the result is any similar film gets compared to it for years to come. In 2010, Asif Kapadia did just that with his documentary Senna about the tragically killed Formula 1 race driver. That film set a new high water mark for archival documentaries and began the era of comparing all documentaries to Senna.

Five years later, Asif Kapadia returns with his follow-up archival documentary Amy and the obvious question is, 'Can it compare to Senna?' The answer is an emphatic yes. In Amy, Kapadia again paints a beautiful and heart wrenching portrait of a larger than life character cut down tragically young. The result is an expertly crafted narrative with an emotional resonance sure to remain with the audience long after the credits roll.

While Kapadia had thousands of hours of Formula 1 race television from which to build Senna, his archive of Amy Winehouse footage was somewhat more limited. Amy's friends' home videos make up the lion's share of the early content with concert tapes, television appearances, paparazzi footage, and even concert bootlegs shot on cell phone cameras playing important roles as the film progresses. The breadth of footage and access that Kapadia gets is an achievement on its own. It would seem that if Amy Winehouse ever appeared on camera, Kapadia and his team likely saw it.

As in Senna, never is a talking head shown on screen. Instead, extensive audio interviews with important people in Amy's life guide us through her story. Notable interviewees include Amy's best friends since childhood Lauren Gilbert and Juliette Ashby, her first manager and close friend Nick Shymansky, her husband Blake Fielder, various producers and record executives with whom Amy worked closely, and her parents Janice and Mitchel Winehouse -- her father Mitch playing a particularly important role for Amy as her voice of reason, or lack thereof as a conclusion may well be drawn. Again it would seem there was no one important in Winehouse's life the filmmakers missed. The fact that the interviews were conducted with audio only and not photographed likely contributed to less reluctance on the part of the interviewees to either speak more honestly or speak up in the first place.

Amy's musical catalog plays an equally important role throughout the film. Many lengthy portions of both live and studio recording are heard with Amy's often clever lyrics appearing on screen and helping to move the narrative forward. The effect is both a greater understanding of Winehouse's musical process and the events in her life that inspired the songs.

As with any true story that ends in tragedy, there is the knowledge of the impending doom from the story's outset. We root for this young girl with such a bright future to make a few better decisions and somehow avoid her fate. The filmmakers, however, take great care not to dwell too deeply in the dark places, presenting a succinct account of the events that led to Amy's death without ever feeling like part of the exploitation that enveloped her.

Ultimately, Amy is a celebration. The tragedy of the events surrounding the woman are essential to understand but the incredible emotions we feel are because of her artistry, her love, and her beautiful spirit. Those emotions will continue to resonate because of the artistry of Kapadia and his team, who deserve remarkable praise for crafting such a marvelous film. Let the era of Amy commence.

Review originally published during the Cannes Film Festival in May 2015. The film opens in select theaters in the U.S. on Friday, July 10.