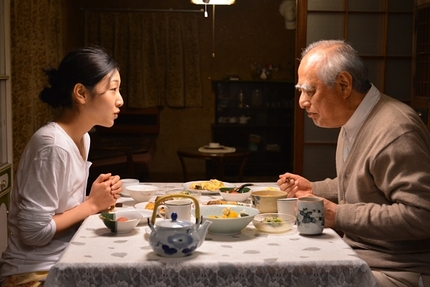 Last Friday, the 9th edition of the Five Flavours Film Festival in Warsaw, Poland ended with a screening of Sono Sion's Love and Peace and the announcement of the People's Jury Awards. Coming up on top was the widely praised 200-minute Japanese indie drama 0.5 mm, the second film from director Ando Momoko. The jury, comprised of 11 Asian film enthusiasts, also reserved a special mention for the Eddie Cahyono's Siti from Indonesia.

The jury chose 0.5 mm "For the lightness of narrating the story of a generation clash and solitude, for a sparkling sense of humor, and a charismatic heroine - a brilliant role of Sakura Ando." Concerning Siti, the jury offered that "We have been mesmerized by the film's formal beauty, which creates a bond between us and the character. For a subtle story of a woman discovering her inner strength in the face of adversities."

Screening over 30 features from around Asia and welcoming numerous guests from Japan, Hong Kong and the Philippines, Five Flavours held its most successful edition yet, breaking previous attendances records by toping 11,000 viewers. In addition to current films from East and Southeast Asia screened in competition, the festival also offered programs on John Woo's Heroic Blooshed period, Taiwanese Wuxia films and contemporary works by women directors from Japan. The 10th Five Flavours is scheduled to take place between November 16th and 23rd, 2016.