I THOUGHT I TOLD YOU TO SHUT UP!! Watch The Complete Short Film Now! 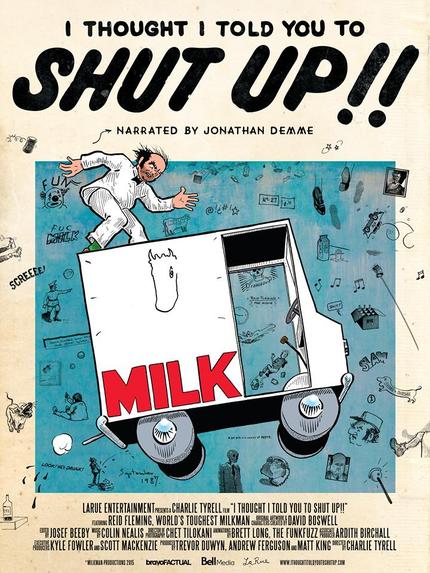 It was just last week that we shared the trailer for Charlie Tyrell's short documentary I Thought I Told You To Shut Up!! and now the complete short film has been released online. Narrated by acclaimed director Jonathan Demme the film tells the story of underground comic book artist David Boswell and his most famous creation - Reid Fleming, the World's Toughest Milkman.

In the late seventies David Boswell created Reid Fleming, the World's Toughest Milkman, a comic book anti-hero and counter culture icon. By the following decade, Warner Brothers was preparing a Hollywood feature film. Now, over 30 years later, the character is still mired in contractual limbo, or development hell. Narrated by Academy Award-Winner Jonathan Demme (Dir. The Silence of the Lambs, Stop Making Sense), I Thought I Told You To Shut Up!! combines stop motion animations with interviews from Boswell, his Hollywood friends, and fans as they discuss the enduring appeal of the World's Toughest Milkman.

Check out the short film below!

I Thought I Told You To Shut Up!! from Charlie Tyrell on Vimeo.

More about I Thought I Told You To Shut Up!!

I read this like 20 years ago! I thought no one else even knew this existed ! What a great shot film.