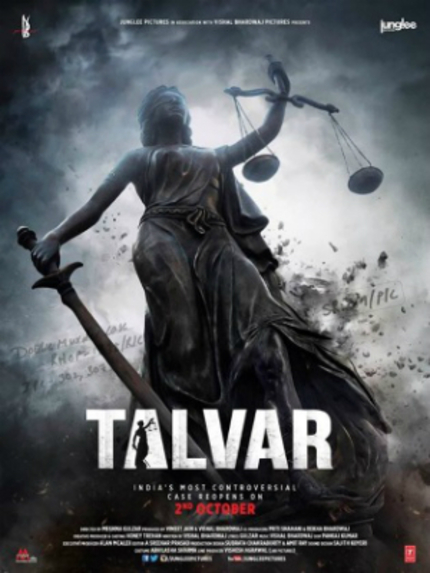 In 2008, Aarushi Talwar, 14, the daughter of middle class parents, was found dead in her Mumbai home with her throat slashed. Suspicion quickly fell upon the family's servant, a Nepali migrant named Hemraj, but when he was found dead the next day in a nearly identical slaying, all hell broke loose.
This was only the beginning of an event that captivated the nation with more twists and turns than even the nuttiest that Bollywood could come up with. The Noida double murder, as the case is familiarly known in India, has been the object of conjecture and speculation since day one, but Meghna Gulzar's Talvar (English title: Guilty) is the first attempt to tackle the material on the big screen, and it's an explosive piece of work.

The film opens with the discovery of the young girl's lifeless body by her family and friends. Shruti, name changed for the film from Aarushi, was presumed to be an innocent, a victim of a crime of violence and passion from her repressed household servant. However, as soon as the police arrive to begin an investigation, reality and fiction begin to meld in discomforting ways.
When the initial constable in charge of the investigation turns out to be incompetent, which is no surprise to the audience, a hotshot detective played by international star and character actor Irrfan Khan (Jurassic World, Life of Pi, Slumdog Millionaire, The Amazing Spider-Man 2) is brought in to solve the case. However, the deeper he digs, the more dirt falls on him from above, burying any chance of true justice.

Talvar is a remarkable achievement that works on a number of levels, both as a contemporary Indian movie in contrast with the mainstream market and as an experimental effort designed to question long-held assumptions of superiority and safety. Far from a traditional police procedural thriller, Talvar turns most of those conventions on their heads, along with the traditional Bollywood reverence for the police. In addition to that, there is also the splintered storyline, multiple points of view, and stellar performances to consider. All the way around, it's an unusual and welcome addition to the Indian independent film world.

Many of Indian cinema's greatest financial and cultural successes have been based on the idea of the hero cop. Unlike in America, where the anti-hero has been in vogue for decades, Indian mainstream audiences still like their police to be the white-hat types. Films like Dabangg, Singam (Tamil), Singham (Hindi), Gabbar Singh (Telugu), and countless others elevate the police officers to superhuman, morally incorruptible heights. Lately however, the facade is beginning to crack, as films have started to reflect a greater distrust and acknowledgement of incompetence and corruption behind the uniform. Anurag Kashyap's Ugly from 2014 was among the industry's most scathing critiques, but Talvar takes the vision of the corrupt police officer and stretches it that final inch into collusion and deceit. So much so that when Irrfan's detective shows up, his arrogance and general boredom with his job is acceptable in the face of the outright ineptitude of his predecessors.

When Irrfan's Ashvin Kumar takes over the investigation, the film takes a Kurosawan turn as he genuinely attempts to piece together the events leading to the crime, to Rashomon-like effect. Ashvin is no saint; he regularly bends and breaks the rules of protocol in the name of truth seeking, but he never quite turns that corner into Bad Lieutenant land.
Some of the most remarkable directing takes place as Ashvin attempts to collate all of the different stories into a coherent series of events that makes sense and doesn't fall prey to the lies and liars attacking him from all sides. This gives us multiple gut-wrenching reenactments of the brutal crime through the testimony, both legitimate and coerced, of numerous participants and witnesses. It's not easy to watch, but it is necessary to understand the dynamics of the character and what he must suffer in order to reach his end goal.

The old adage that truth is stranger than fiction proves itself true again with Talvar, as the most shocking and unpredictable twists are torn directly from the case's history. I don't want to spoil it for viewers unfamiliar with the case, but suffice it to say that Kumar's hero cop doesn't exactly get his way in the end.
Not unlike Chaintanya Tamhane's critically acclaimed Court, Talvar shines a light on the inescapably labyrinthine bureaucracy of of the Indian justice system. Just when everything seems to be solved and settled, someone walks in and drops a bureaucratic bomb in the middle of the investigation. The ending will have viewers worldwide shouting at the film and demanding justice, only this time, it's not just an injustice on screen, it's a reflection of what actually happened.

The world may never know what really, truly happened to Aarushi Talwar that day in 2008. A cursory Wikipedia search of "Noida Double Murder Case" is just the start of an infinite rabbit hole of evidence, conspiracy, theory, and doubt. However, thanks to Meghna Gulzar's expansive exploration of the subject matter, with a screenplay by Bollywood auteur and expert in Shakespearean drama Vishal Bhardwaj (Omkara, Maqbool, Haider), Talvar is probably about as close as we're likely to get.
Talvar makes for gripping, infuriating, and at times illuminating viewing, and it's a film that will translate just as well to those ignorant with the case as to those intimately involved.