Toronto 2015 Review: SHERPA Scales A Different Side of Everest 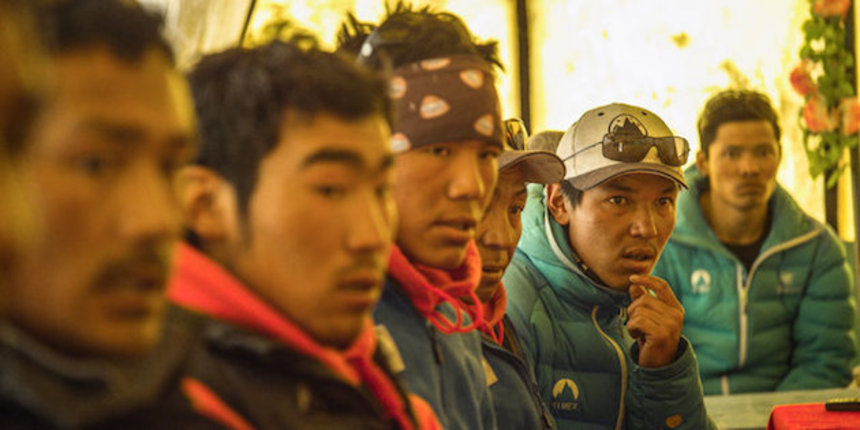 On May 29th,1953, Nepalese guide Tenzing Norgay brought New Zealand philanthropist mountaineer Edmund Hillary to the summit of Mount Everest. The very idea of crawling to the top of the highest mountain on earth, with its punishing temperatures and near lack of oxygen, captured the imagination of the planet.
Hillary (and expedition leader John Hunt) were both knighted. Their smiling, deferent, ethnic companion was bestowed with a lesser honour, the George Medal, which nevertheless made him the most famous man from Nepal in the world. The significance of this, however, a legacy which has outlasted all three of these men, is that Norgay's ethnicity -- he is from the Sherpa clan -- ceased to be the name of a people, and thereon became a global brand name.
Flash forward nearly 50 years to April 18, 2014, when that terrible avalanche killed 16 sherpas just beyond the first Everest base camp, and the mountain known by the locals as Chomolungma is now Nepal's chief economy. Thousands of people from around the world pay one of 38 expedition companies huge amounts of money for the now tourist exercise of getting to the top of Everest. The Nepalese government makes millions.
The sherpas however, who (literally) do most of the heavy lifting and shoulder the most risk, see the tiniest fraction of this money. It is still one of the best paid (and most dangerous) gigs in the Himalayas, but there is a spiritual and family cost to this profession that is not appreciated by many of the foreign adventurers who train hard and pony up for the privilege.
Australian director Jennifer Peedom initially went to make a documentary about what Everest looks like in the 21st century, with its logjam of international climbers, from the point of view of the sherpa community. What her and her team ended up making is the most important film on Everest since the newsreel footage from the original climb. The tragedy in 2014 not only ended the climbing season for that year, but brought to a head a labour movement that had been brewing since Nepal became a democracy in the 1990s and a generation of younger, more educated sherpas started hauling oxygen, gear and fuel up the mountain.
Deeply embedding herself in the sherpa community at basecamp, where the sherpas are usually lodged separately from the expedition owners and their clients, Peedom mixes stunning helicopter (some of it possibly drone) photography in with talking-head interviews, and several trips across the treacherous Khumbu Icefall. The latter is the most unstable part of the climb, not far from basecamp, and photography is done by the sherpas themselves, often at night when the temperatures are coldest and the path most stable.
For every climber who goes up the mountain, the sherpas have to cross that icefall a dozen times with copious amounts of gear, much of it frivolous. Peedom documents a sherpa distributing hot towels and made-to-order tea to the climbers at one point, framing the sherpas as more like airline attendants than highly specialized workers. At one point, a sherpa with a Go-Pro crossing a crevasse on a ladder falls in and is buried (unharmed). The footage is an effective reminder for what is to come.
In the nearby town of Khumjung, she also visits the home of prolific sherpa Phurba Tashi. Tashi is the main character on screen, although his boss, long time exhibition owner Russell Brice, gets a fair share of time as well.  As close as one will get as a celebrity heir to Tenzing Norgay, Tashi is on the eve of breaking the record of summiting the mountain in the 2014 season (that would be 21, for those counting).
His wife, often talking through tears on camera, remains unhappy with the amount of time her husband spends on the mountain and would love for him to retire. Each climbing season is like sending him off to war, and if she could see the various political shenanigans going on at basecamp, she might be even more concerned.
The 'Everest Circus' is in full force, with incidents of climbers getting in shouting matches and misunderstandings with the locals. And even seasoned expedition owners, such as Brice himself, are caught blatantly lying to their clients about the nuance of the labour conflict.
Blindspots towards the language and spiritual side of the region should be inexcusable at this point in history, but are omnipresent nonetheless. The first world has been polluting the mountain with oxygen canisters, dead bodies, and other debris, collateral damage of the unfettered capital enterprise that Everest has become. Climate change is making the path more unstable -- not seen on camera, is the then future event of the 2015 earthquake that killed another 18 people and ended this year's climbing season.
The Nepalese government knows a cash cow when they see one, and along with the expedition owners and their clients are putting unreasonable pressure into a situation that is already fragile. Everest is an enterprise in flux and Peedom is right in the middle of it. Sherpa successfully aims to balance the romantic challenge we often think of when we think of Everest (which includes the 2015 movie of the same name, which I have not yet seen) with a little morality, some human dignity, and a people's labour movement on par with Harlan County, USA.
Sign-In to Vote
Tweet 0 Submit

Do you feel this content is inappropriate or infringes upon your rights? Click here to report it, or see our DMCA policy.
Documentaryeveresttiff 2015toronto 2015Toronto Film FestivalJennifer Peedom

Must be a sobering thought as well, that when you're finally on top of the Everest, the guys next to you have been there a dozen times already...

It's kind of amazing how easily the clients can pretend that the sherpas are not there and that they themselves did everything, while in reality they've done so little.