Toronto 2015 Review: BLACK MASS, A Work Of Power And Impact 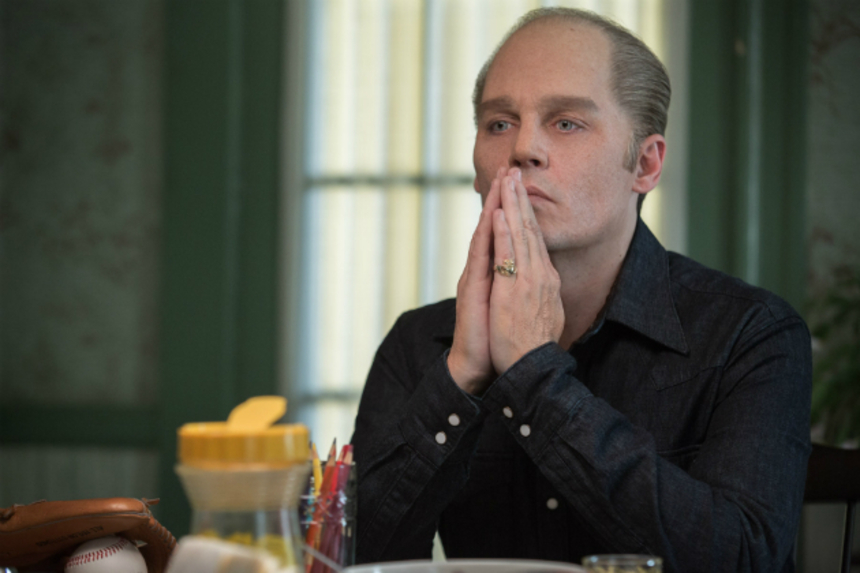 The real life rise and fall of James "Whitey" Bulger already seems the stuff of cinema. He's the gangster who grabbed South Boston by the throat, leading his Winter Hill mob to gain control over much of the city. The fact that he did so while providing information to the FBI, and having a younger brother who was one of the leading politicians in the state, speaks to the strange complexity of his story.

Plenty of films have dealt with Bulger, including Martin Scorsese's The Departed, which uses his life in a tangential way to infuse Jack Nicholson's character Frank Costello with a certain degree of authenticity. Joe Berlinger's extraordinary doc Whitey played Sundance in 2014, and it serves as an excellent primer for those unaware of his story.

This leads us to Black Mass, a big scope, on-the-nose film that simplifies for the screen Bulger's life in interesting but occasionally limiting ways. At its best, this is a film that echoes the best of Scorsese (complete with Rolling Stone-scored montage); at its weakest, it strips away some of the grey of the actual tale in favour of black-and-white moralizing.

The film also acts as a reminder that Johnny Depp can still conjure a performance that's both powerful and surprising. With his thinning hairline and piercing blue eyes (thanks to contact lenses), his portrayal of Bulger is immensely captivating. Certain scenes feature him doing little more than brooding, yet the quiet rage simmering beneath even an innocuous conversation is palpable.

Depp is joined by a fine ensemble, including Joel Edgerton (who will always be Luke's future uncle in the Star Wars films for me), Benedict Cumberbatch, Kevin Bacon, Corey Stoll, Peter Sarsgaard and Dakota Johnson. Breaking Bad's Jesse Plemons actually makes the biggest impression at the onset, his freckled face perfect in the period piece. Yet midway through the story, his presence essentially disappears, as most of the threads get left dangling in favour of a much more narrow look at the titular character's surroundings.

One can pick apart the Southie accents all you want - Cumberbatch still just seems odd playing American, even if one can't put a finger on just what it is about the timbre of his voice that still feels like it should be speaking Brit. Yet the film strives for that semblance of the real and gritty in all aspects. The clothes and cars are easy enough to get down pat, but it's the way that the characters come to life within the milieu that feels very much like they're achieving a level of believability that credits the film.

I think it's fair to consider this Scott Cooper's most accomplished work. Following on his debut Crazy Heart, Cooper's storytelling is often overwhelmed by a single, showcase performance. In Black Mass, the director's thumbprint is a bit more on show; there's a flourish that's agreeable and infectious.

Yet all the big collars and flayed-out bell bottoms can't make up for the fact that the narrative is pretty narrow, the questions asked relatively few. Based on a book by two experienced journalists, I for one would still have preferred the film to address some of the disputed elements of Bulger's alleged actions in a slightly more elevated way. The film need not have disputed the accounts per se, but the fact that there's no real questioning of the testimony of murderers who themselves were looking to cut breaks simplifies the narrative while weakening it. A bolder, brasher film would have allowed these paradoxes to exist without painting Bulger as simply a tyrant, often the one doing the shooting or strangling, making him in that hand-on way feel smaller rather than the opposite.

Despite these reservations, there's lots to recommend about the film. The action sequences are well delivered, and even the minor characters are given attention that's pleasing. Fundamentally we've got a film that sinks or swims based on its lead, and because the performance by Depp is both unique and interesting, it's reason enough to applaud.

Black Mass may not quite climb to the pantheon of gangster films that it emulates, but it remains at its best its own work of power and impact. With a balls-out take by Depp that's equally times quietly menacing and effectively sweet, it's a film that might not tread new ground but one that's worth your time hanging with the boys from Winter Hill.

Do you feel this content is inappropriate or infringes upon your rights? Click here to report it, or see our DMCA policy.
Benedict CumberbatchJoel EdgertonJohnny DeppScott Coopertiff 2015Whitey Bulger