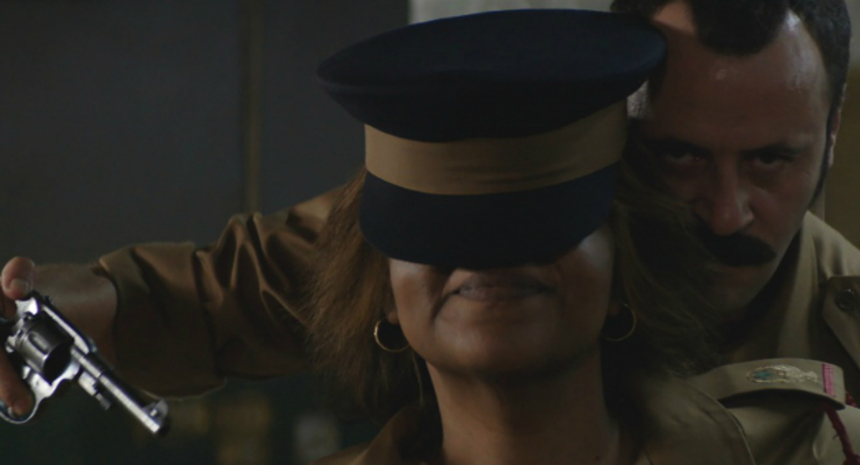 Two men in a police station. One is locked up, the other should be.

The first genre film from United Arab Emirates, Zinzana (aka Rattle the Cage) is a refreshingly potent, teasingly intense drama. It begins with Talal (Saleh Bakri) waking up in a jail cell in a small town as the only other prisoner is released on bail. It seems the two men were arrested for fighting, but Talal doesn't have his wallet, so he's facing a 48-hour wait for a judge to arrive.

The local sheriff is kind enough to allow Talal to make a phone call, which is when it's revealed that he came to the small town with the purpose of reconnecting with his ex-wife. She has good reason to hang up on him; he's an alcoholic who consistently refused treatment for his addiction and did not treat his wife, or his son, well. He may be sober now, but he's reaping the consequences for his past sins.

All that becomes background noise when Dbaan (Ali Suliman) arrives at the station. He's an enigmatic and charming gentleman in uniform who quickly dispatches the hapless sheriff and establishes himself as the new, if temporary, ruler of the police station. He flirts with Aida, an unsuspecting co-worker of the sheriff, and threatens Talal with terrible, horrible, awful things if he doesn't cooperate fully. Dbaan claims that all he wants is for Talal to be quiet in his jail cell. For his part, Talal is smart enough to realize that his life is in danger as long as Dbaan remains in the station.

Thus, a classic cat-and-mouse scenario is firmly established by the varied screenwriters, which then allows director Majid Al Ansari to orchestra a composition filled with thrills and chills, some lighter, most darker. The lead actors bounce off each other, Bakri as a man forced to keep his emotions tightly coiled so as to prevent violence to others, and Suliman as the maniac who is liable to do anything to anybody at anytime.

Yet the film pushes against the inherent structures of a film set in a single room, not only with the imaginative camera work and fluid editing; the tone shifts as well, allowing for broad, unexpected strokes of comedy, as well as boiling, melodramatic domestic tensions, and the constant threat of extreme violence, ready to be visited without a moment's notice.

Zinzana is quick, agile work by director Majid Al Ansari and his filmmaking team. What might sound like an oppressive or limiting setup allows for imaginative flourishes to burst forth without warning, and also provides a splendid setting for two excellent actors to face off against each other. The movie wrestles enjoyably with the straitjacket of its strict limitations, making for a marvelously enjoyable thriller.

Do you feel this content is inappropriate or infringes upon your rights? Click here to report it, or see our DMCA policy.
Ali SulimanFantastic Fest 2015Majid Al AnsariSaleh BakriUAEUnited Arab Emirates