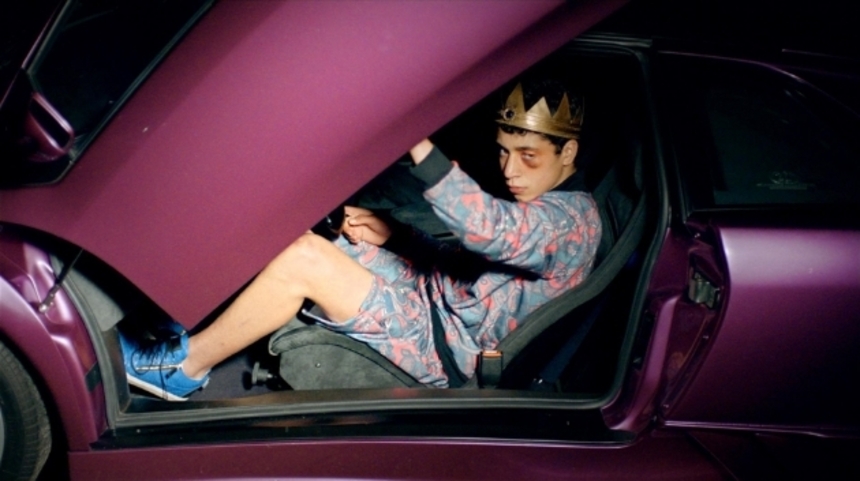 Young Dutch filmmaker Sam de Jong's debut film Prince has all the stereotypical elements that make up a so-called gangsta movie: guns, drugs, babes, bling-blings and expensive sports mobiles. But underneath all its macho posturing, inner-city working class clichés and flashy aesthetics, an unexpected sweetness is revealed as the film unfolds.

Our teenage half-breed protagonist Ayoub (Ayoub Elasri) hangs out with his buddies and spending time blowing up mail boxes with firecrackers in their Amsterdam housing projects neighborhood. Ayoub dreams of hitting big and hooking up with Laura (Sigrid ten Napel), a blonde neighborhood girl who is currently seeing Ronnie, a head of the gang of older, lowly criminal boys who taunt and bully around Ayoub and his friends. "Our day will come," Ayoub ominously tells his buddies after one such bullying session.

At home, Ayoub has to contend with his lonely Dutch mother and his cute, half sister Demi (Olivia Lonsdale). His asserting the 'man of the family' role only meets disdain from them. He meets his homeless drug addict Moroccan father and slip in whatever money he can give him. His father is one of those fragile, effeminate 'little bird' - not meant for this world.

Ayoub finally gets attention from a creepy, sniveling local kingpin Kalpa and start running errands for him. Kalpa even lets him drive his iridescent Ferrari and gives him a crown as a souvenir,  calling him Prince.

Hitting big time means distancing himself from his buddies. Ayoub's over-protectiveness of his sister comes between him and his best friend Franky (Jorik Scholten) who falls in love with her. Franky also happens to be Ronnie's little brother and after Ayoub explodes on him, Ronnie calls for blood. Kalpa sees Ayoub's beat up face and things get ugly. Kalpa wants him to get revenge on Ronnie at gunpoint.

Beneath all this macho posturing, there is a strong undercurrent of innocence and sweetness carried out by young actors. Their interactions are authentic and have an obvious air of kids playing adults.

It would be easy to group de Jong in Nicolas Winding Refn camp with his slick style and 80s style pumping electronic soundtrack (by Dutch musician Palmbomen). But Prince has more common with Truffaut's 400 Blows in spirit. The film easily could have gone more conventional - the eruption of violence and overflow of emotions. But it's filled with many quiet, sweet tender moments - like Ayoub brushing off his junkie dad's disheveled hair in the empty pool, or him awkwardly wooing Laura.

A tragedy brings resolution and brings the group together in unexpected ways. de Jong is smart enough not to get caught up in his aesthetics and doesn't forget the meat of the story and characters. Prince is a great feature debut and a showcase for a promising young director who has style and more importantly, a sensitive soul which is a rare commodity in today's cinema landscape.

Prince will be released in theaters & on VOD platforms August 14th.

Dustin Chang is a freelance writer. His musings and opinions on the world can be found at www.dustinchang.com
Tweet Post Submit