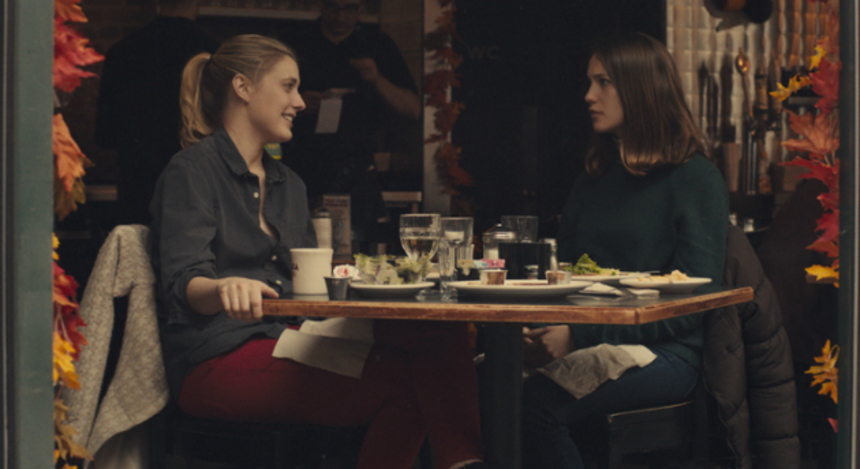 After falling into a depressing, dour pit with 2010's Greenberg, director Noah Baumbach rebounded with the far more lighthearted and sprightly Frances Ha, which he co-wrote with Greta Gerwig.

Their collaboration continued on a successful note with last year's While We're Young, a comic examination of a 40-something married couple coming to grips with middle age through a new friendship with a couple in their mid-20s. Their third teaming shifts the focus to a 30-year-old named Brooke, played by Gerwig, who breezes into the life of 18-year-old Tracy (Lola Kirke), a college freshman living away from home for the first time.

The set-up establishes that the shy Tracy is having trouble fitting in and making friends. She's an aspiring writer whose greatest aspiration is to be accepted into an elite literary society at school; when she fails to make the cut, she shares the pain with a fellow student/reject/literary dweeb (Matthew Shear). Thinking they've made a connection, she's thrown when she sees him with a new girlfriend (Jasmine Cephas Jones).

Out of desperation, really, she blind-calls Brooke; they've never met, but Tracy's mother and Brooke's father have fallen in love and plan to marry at Thanksgiving. Brooke is more than happy to meet Tracy, and they spend the kind of whirlwind night in Manhattan that makes a permanent mark in the memory, filled with drinking and dancing and traipsing around town and meeting new people. Tracy falls in love with Brooke, and it's not difficult to see why. Tracy is unsure about herself, still uncertain about who or what she wants to be, and Brooke appears to have it all together. She's smug and completely self-confident, always ready to tell others about their shortcomings; she takes charge of every situation and brooks no disagreement.

In time, however, Tracy's writerly inclinations take hold. Always more of a passive observer, she finds inspiration when she takes a step back from Brooke and realizes what a great subject she would be for lightly-disguised fiction. Tracy is at a point that many aspiring writers will readily recognize: she wants to write, she may even need to write, but she doesn't know what to write about. Without Brooke realizing it, Tracy has transformed her from a new friend into source material.

The marvel of Mistress America is director Baumbach's ability to shift gears from easy, breezy comedy into thoughtful, probing drama. Much of this can be credited to the script, which blends two voices -- one a sourpuss, the other a cheerful sort -- into one, producing a complex and nuanced take on growing up in a certain sub-section of society.

Brooke is demonstrably older than Tracy, but the varying facets of their personalities are at different stages of growth, which seems entirely authentic. Indeed, my perspective on the film's characters is undoubtedly skewed by my own experiences, in that I was familiar with each type of personality during the years I lived in New York City years ago.

It's possible, then, that my view of the movie is elevated because it rings true to me in almost every possible way. Or, maybe Mistress America is just a very good and funny comedy, balancing light and dark with a deft touch and welcome perspective.

The film opens in select U.S. theaters on Friday, August 14, before expanding across the country in the following weeks.

Do you feel this content is inappropriate or infringes upon your rights? Click here to report it, or see our DMCA policy.
Greta GerwigLola KirkeNoah BaumbachMatthew ShearJasmine Cephas JonesComedy