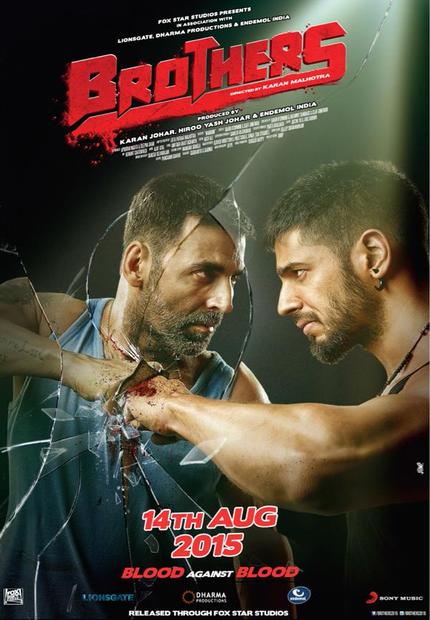 Gavin O'Connor's Warrior was a surprise critical and box office hit back in 2011, as well as being one of the first studio films set within the increasingly popular world of Mixed Martial Arts fighting. That film pitted brothers Tom Hardy (Bronson, The Dark Knight Returns, Mad Max Fury Road) and Joel Edgerton (Animal Kingdom, Acolytes, The Gift) against one another in an MMA battle and garnered positive notices, much to everyone's surprise.
The film, rife with sibling rivalry, hatred, and melodrama, was snatched up for reevaluation and remake by India's Dharma Productions and seemed like a slam dunk for its producers, who handed the project to director Karan Malhotra, following up his surprise corker Agneepath (2012). However, sometimes things have a way unraveling in a way you completely expect, in spite of high hopes otherwise, and Brothers isn't quite the film it could've been.

Brothers transports the action of Warrior to Mumbai, India, a land where MMA fighting doesn't have a strong background, though wrestling has a centuries old tradition. We are first introduced to Garson "Gary" Fernandes as he exits prison for a crime unknown to us, greeted by his youngest son Monty Fernandes (Siddharth Malhotra).
Monty's excitement to see his father soon dissipated when his father asks for his eldest son, David (Akshay Kumar), who has abandoned the family to start his own life elsewhere. It is here, in the first ten minutes of the film, that we begin to see how Bollywood mangles this concept by sticking to insidious convention and putting a chokehold on this seemingly unbeatable translation.

When we are introduced to David, it's at his daughter's birthday, a million miles away from any notion of MMA, though a few strategically placed tattoos intimate that something more lay just beneath the surface. So far, no problem. However, at the precise moment that the film moves from the melodrama outside the prison to the girly party, the music switches to a dainty childish theme with all the subtlety of a right hook.
Emotional manipulation is part and parcel of any decent melodrama, but the clumsy way in which this film handles the transition is indicative of Bollywood's "two steps forward, one step back" approach to modernizing their filmmaking to become competitive with the rest of the world.

From there on out, the film follows a fairly predictable route, even if you haven't seen Warrior. If you have seen Brothers' antecedent, just bear with me. We quickly learn that the titular Brothers are not friends and that David blames his father for ruining his life. David has become a physics teacher at a local high school, but when his daughter's illness becomes too expensive for a teacher's salary, he turns to street fighting to keep the bank at bay and loses his job.
Monty, on the other hand, has nothing in his life but his hatred of his brother and the innate ability to beat people senseless. When the flashily dressed Mr. Briganza announces that he's bringing India it's first ever sanctioned MMA event, both brothers find their way into a winner take all tournament and you can probably guess the rest.

Director Karan Malhotra has been behind the camera for over a decade as an assistant director on some of Bollywood's biggest features, but Brothers is only his second solo film. Brothers is also his second remake, as Agneepath was a modernization of a 1990 film starring Amitabh Bachchan. While his first film was a major success in my eyes because of its embracing of Bollywood convention while keeping the digressions into populist pablum to a minimum, Brothers is not so lucky. The film drips with melodrama, which is good, a plot like this deserves it, however, it also includes far too many irrelevant asides, details, and flashbacks that serve no narrative purpose that couldn't have been achieved in less draining ways.

In Warrior, Nick Nolte's Paddy Conlon was a recovering alcoholic who seeks salvation through his rejuvenated Catholic faith. In Brothers, Jackie Shroff's blubbering, stumbling, emotionally shattered Gary Fernandes is also Catholic. We know this because (a) his last name is Fernandes, and (b) there are crosses on absolutely everything in sight. We are frequently, nay, constantly reminded of his faith and the faith of his son David at every turn, but at no point does it become relevant to the story. David has no less than three crucifixes tattooed on his body, along with at least a couple of bible verses, but never once does it figure into the narrative. That doesn't stop the camera from fetishizing the iconography to a degree that made me wonder if I was missing something. I wasn't.

If that was the only digression, I could have let it go. It's a bit strange, but it's not a deal breaker. However, then comes Kareena Kapoor in a complete non-sequitor of an item number right before the intermission. This is where the Bollywood business machine ruins films. After a successful fight for Monty Fernandes, his trainer and Dad take him to a bar where Baby (Kapoor) is performing that night, which leads into a six minute dance number that has nothing to to with anything. Item numbers exist to sell music on iTunes, ringtones, and get butts in seats.
There's nothing wrong with that when they are incorporated effectively, but in recent years filmmakers who should be above this practice have ruined great films with them. This is only the latest example. This glittery, sopping wet item number has no place in the film, and yet there it is, bright as day. The tonal shift from drama to glib consumerism is a cancer on Bollywood films, and one reason they still have a hard time being taken seriously by anyone outside of their core audience.

Then there are the flashbacks. Oh, the flashbacks. Boy howdy, does Bollywood love the flashbacks. There are at least 30 minutes of flashback sequences designed to cater to the lowest common denominator and the laziest of cinema viewers. What could've been explained in three minutes of expository dialogue is drawn out over half an hour as the audience is pummeled with extra story. Why? Who knows! Keep it simple, stupid!

Akshay Kumar's David Fernandes is a master of the fighting strategy commonly referred to as rope-a-dope, in which a fighter takes a barrage of punches in an effort to tire out his opponent at which he can be easily dispatched. Brothers is a film that plays emotional rope-a-dope with its audience.
Beating them down with melodrama for the first hour of the film, then improbably fight sequences that go on about three times as long as they should for the second hour, in the hopes that the final reconciliation (sorry, spoiler phobes) will be the emotional coup de grace that gives them a reason to leave the cinema feeling exhilarated. Unfortunately, as much as I wanted to love this film, I was down for the count by the time Brothers came to a close.
Tweet Post Submit