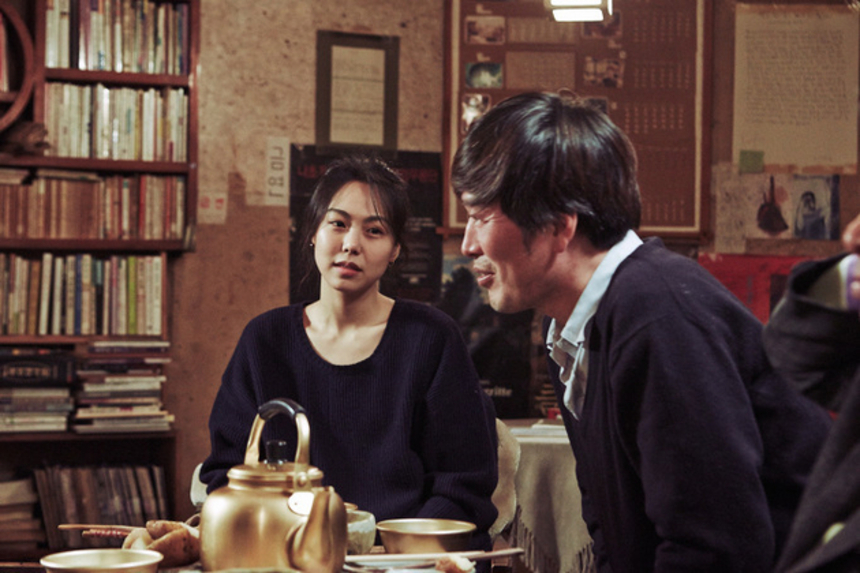 Following Hong Sangsoo's career guarantees for viewers, at the very least, one thing - developing a keen eye for detail. The auteur's films are remarkably similar to one another, from their lecherous male director/professor characters and conversations over bottles of soju, all the way down to their repeating details and occasional (but abrupt) camera zooms and pans.

So his latest film Right Now, Wrong Then, though almost absurdly Hongian in its protagonists and themes, feels comparatively lively with almost ten cuts in the first ten minutes and a camera which, though still unshakeably fixed to an immovable tripod, gleefully zips from left right to right in dialogue scenes and wanders around the frame, searching for details and gestures.

Making his second appearance in a Hong film, Jung Jae-young (Castaway on the Moon, 2009) plays a Seoul filmmaker who visits neighboring Suwon to screen his film and give a lecture. He arrives a day early and meets a local woman, drunkenness ensues. Much like Virgin Stripped Bare By Her Bachelors (2000), Hong's latest plays out its simple story for the first hour and then repeats it, with at first subtle and then increasingly major differences, in the second.

Largely thanks to a terrific central performance by Jung, Right Now, Wrong Then turns out to be one of the funniest entries in Hong's catalogue. Yet, more so than his recent outings, such as last year's Hill of Freedom or Nobody's Daughter Haewon (2013), there's also an uncomfortable malaise burbling just below the surface, harkening back to some of his earlier works, which quietly boils over in a few standout scenes. Jung's director, a married man with children, may not have the best of intentions towards his new artist friend in Suwon, but he's also lost, agonizing over the meaning and truth of words, and thus his own work and position in life.

However, the film isn't just about Jung's character. Kim Min-hee, showing again how brightly she can shine when given the right material, is a superb addition to Hong's stable of performers, easing naturally into her character, a charming young woman who hides nothing, yet is difficult to read. In the film's first long-take drinking scene, her character starts off sober and after accepting umpteen soju refills from her director companion, Kim stealthily guides her to tipsiness and before long drunkenness. In another, her face registers her deteriorating mood as others speak across her. Hong zooms in to make sure we register her expression, but this machination proves unnecessary, as Kim, silent and stony-faced, ably catches the viewer's attention.

As with every Hong film, Right Now, Wrong Then is unlikely to win over non-converts, but fans will delight in this latest collection of gawky characters and awkward conversations. Hong acolytes Yu Jun-sang and Young Yuh-jung, and newcomer Ko Ah-sung appear in small roles, but this tale is definitely a showcase for Jung, whose recent commercial work has been spotty, and especially Kim, who impressed in Helpless (2012) and Very Ordinary Couple (2013) and is now one more reason to get excited about Park Chan-wook's upcoming Fingersmith.

More about Right Now, Wrong Then