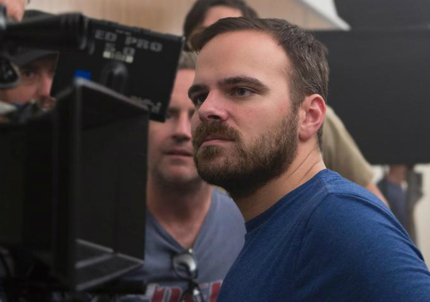 When I saw writer-director Kyle Patrick Alvarez's first feature Easier with Practice, based on a short story, I knew to keep this guy on my radar. For a first film on a shoestring budget, the film looks something born out of Hollywood.
Smart move. Alvarez's next film, C.O.G., was also based on a short story, this one by David Sedaris. A fun and large fact about Alvarez: this young filmmaker is the first and only to get Sedaris' full blessing to adapt one of his stories into a feature film. Sedaris has given the green light to other filmmakers a few times before but changed his mind. Not for Alvarez. C.O.G. had its world premiere at the Sundance Film Festival. I was there -- not important but I wanted to brag -- and the film left the festival to critical acclaim. Sedaris was there and I can't imagine how excited / terrified Alvarez was.
I remember thinking at the premiere after the movie ended: if this guy can make an exceptional adaptation of a David Sedaris short story and make it better than the short story it's based on, I can't wait to see what he does next.
Instead of signing on to do a huge blockbuster -- a big, hot trend in Hollywood right now is to recruit successful indie filmmakers to do huge blockbusters; some work out, some end careers -- Alvarez stuck to his indie blood and made a feature on The Stanford prison experiment called aptly The Stanford Prison Experiment.
This might have been a small film but Kyle pulled out the big guns and brought in the most auspicious young Hollywood actors: Ezra Miller (We Need to Talk About Kevin), Tye Sheridan (David Gordon Green's Joe, Terrence Malik's The Tree of Life, Jeff Nichols' Mud, and will play Cyclops in the upcoming X-Men: Apocalypse), Moises Arias (the hilarious Biaggio from The Kings of Summer), Michael Angarano (David Gordon Green's Snow Angels), Keir Gilchrist (It Follows), and Olivia Thirlby (Juno); Billy Crudup (Watchmen) is in it, too, as Dr. Philip Zimbardo, the Victor Frankenstein of the experiment.
Enough of me rambling about my admiration for Alvarez, how about you read my interview with him about his latest film, The Stanford Prison Experiment.

ScreenAnarchy: First off, talk about casting. A majority of the young actors are quickly on the rise to stardom, most notably for me Ezra Miller and Tye Sheridan.

Kyle Patrick Alvarez: Casting is what really drew me into wanting to make the film. It's such a rare opportunity for a low budget indie to have THIS big of an ensemble (25 leads) and I just thought it would be incredible to fill the film with a huge mass of talent. It was humbling to get all of those guys involved. I'm thrilled with how the ensemble turned out.

What made you want to tell this story?

I had this experience while reading the script, of not really believing it really all could've happened this way. I was only superficially familiar with the experiment. So as I started researching it, it just blew my mind how accurate the script was to the real events. So I wanted to make a film that could create that same sense of disbelief, as I found it incredibly powerful and revealing to how we all view the experiment.

Did you get any advice from the real man behind the experiment, Dr. Philip Zimbardo?

Oh, a ton. He read and approved the scripts along the way, visited set, saw the film a bit early on. His involvement with the movie was incredibly important to me and everyone involved. We wanted to make sure we go the spirit of it right and he was the key to that.

This is the first feature that you didn't write. What made you decide to bring on Tim Talbott, or did he write this before your involvement?

Tim had written it well before I got involved. It was a different experience, but Tim is incredibly lovely and fun to work with so it made for a good time. You just come into it a different way, in some ways that's advantageous because it's a more objective experience than a super personal one when it comes to approaching the material.

The Stanford Prison Experiment is based on a real experiment. What steps did you take to ensure it was as accurate as possible?

I was given access to all the raw footage and raw audio from the experiment and before me Tim had based a lot of his script on those same materials. Also we went up to Stanford, measured the space it happened in and recreated that entire space on a sound stage. When we could be accurate, we were. It made for some exciting challenges to stick to the story's authenticity so strictly.

With that, what was the process of balancing having to cut scenes or moments that could have been crucial to the narrative?

My first edit was three hours long, which is really unusual for me. I cut my own films, so my edits are almost always within 5-10 minutes of the final runtime, so here I had to really step back for the first time and just make some brutal changes. Pace was always my biggest concern with this film, with the whole story essentially taking place a in a hallway, so as hard as it was to cut some really strong scenes, it made you really boil the film down to the absolute essentials.

What hurdles came with trying to make the film as accurate as possible?

No hurdles really, the recreation was a lot of the fun. The trick was balancing that with what was cinematic. The sunglasses for instance. In real life, they were all fully mirrored sunglasses. On camera, that would be a disaster. You would always be picking up equipment and you would never see the actor's eyes. So we went through dozens of lens types to find that right balance where there is some reflection, but you can still make out the actor's faces

This is your third feature, second to get into Sundance. It's being widely praised by critics, including myself. Does that put pressure on you for your next projects?

Oh, I'm grateful for the strong response to the movie, but my goal is to always try and make different films, so I just kind of mentally try to unpack the experience of making it and put it in a figurative box somewhere. Moving on to the next one it's about bringing some of the lessons you learned, but also approaching the new one in a totally fresh way. I try not to think there is an expectation for what I'm going to do next, even if there is, I'll stay blissfully unaware of it. I just want to tell a story I love and believe in, regardless of it's size.

You have adapted two short stories into critically acclaimed features. What's the hardest part of the writing process when adopting these kind of stories?

Oh, the challenge is really more in getting access to that material and figuring out the legalities. Usually I'm getting involved with all the legal stuff because I believe in the project and know how to tackle it, so by the time the adaptation work comes around you can just dive in and enjoy it. It's really a gift to have an author trust you with their work.

I'm in the process of setting up an adaptation of this great YA suspense thriller. Hopefully there will be more to report on that soon!

The film is now playing in select U.S. theaters and is also available to watch via various Video On Demand platforms.

More about The Stanford Prison Experiment