TALES OF HALLOWEEN: Watch The Comic-Con Trailer For The Horror Anthology 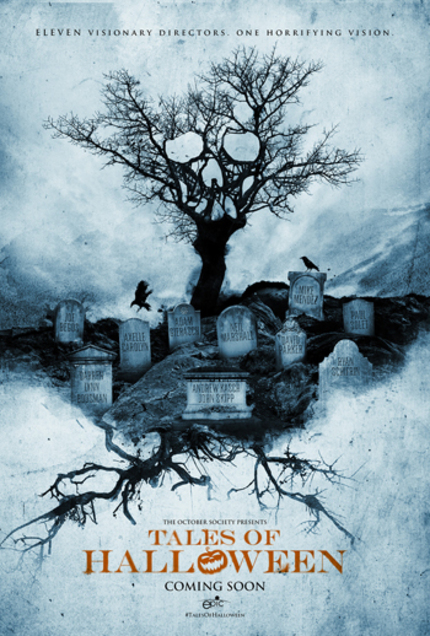 When a number of directors who have had notable input into horror and genre cinema of their own accord get together to make a new Halloween horror anthology one sits up and pays attention. And so we have been tracking Tales of Halloween because even though there have been no shortage of anthologies of late hardly any are this focused on celebrating that time of year that all horror fan films love. Halloween.
On Friday Epic Pictures held a panel at Comic-Con and unveiled the new trailer for the flick. The editing is a touch frantic but there is a lot of information to pass along including who is starring in the flick - the likes John Landis, Barbara Crampton, Barry Bostwick, Pollyana McIntosh, and Joe Dante - and who directed each of the ten tales - Dave Parker, Darren Lynn Bousman, Adam Gierasch, Paul Solet, Axelle Carolyn, Lucky McKee, John Skipp and Andrew Kasch, Mike Mendez, Ryan Schifrin and Neil Marshall.
But you will get the general idea that it should be scary and bloody and at least one tale features a man-eating pumpkin. Just for that alone! C'mon!
Tales of Halloween will have its World Premiere at the Fantasia International Film Festival. I know I will be at the festival at that time so we hope to have a review for you in a couple weeks after the premiere.
Sign-In to Vote
Tweet 0 Submit

some promising monster designs there, and a couple of good screams. This one might be a treat, although horror anthologies to often end up like bad tricks.

It is always the risk. But everyone here has good intentions I think.

I think so too

What about Trick R Treat? That's one of the best Halloween films ever made.

Years from now, Trick R Treat will be for Halloween what A Christmas Story is for Christmas.

Did the creators of this movie poster totally rip off the great books from my childhood called Scary Stories to Tell in the Dark?

Trick R Treat is my all time favorite horror anthology movie, even better than the first Creepshow.

Yes, Trick R Treat was fun, and there the shorts convincingly took place in the same horror-universe. They where all pretty neat, and had a common atmosphere. That seems to be the case with this one as well. It's cool when anthologies has a plot, and the shorts isn't just connected by genre (find footage, horror etc). In WHS (only seen the first one) the difference in quality, kind of creates a distance between the stories. ABC of death is kind of exuced because of the micro budget, total creative freedom, and the high quantity of shorts. I'ts kind of like a short-movie-filmfestival in itself, where you pick out a handful of movies you want to see.

THE MARSHES Giveaway: Win a DVD of This Aussie Horror Flick