QUEEN OF EARTH Trailer Offers Up A Cheeky Thriller Throwback 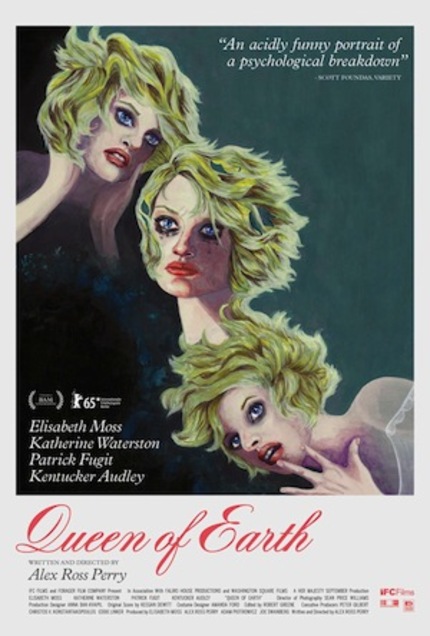 There's something so knowingly corny about the trailer for Listen Up Philip director Alex Ross Perry's Queen Of Earth, that it just becomes some kind of wonderful. That something is the deep-throated voice over which totally edges the trailer into a old school psychological thriller vibe.

Starring Elisabeth Moss and Katherine Waterston as two old friends who find respite at a secluded lake house, there's undoubtedly a bit of Ingmar Bergman's Persona in here, as Patrick Holzapfel stated in his review from Berlin:

When the film starts to quote Bergman and Polanski as a method, it gets on a dangerous path of over-ambition. Perry being a cinephile, such a way of working might seem only natural and even personal for the director. And he absolutely succeeds in terms of craft and mood. It is one of those films where one could argue about the importance of originality. But no matter what the result of such a discussion might be, Queen of Earth is another promising effort by a fearless director.

The unexpected vibe of the trailer aside, the film looks to be another fine showcase for Moss, who has been picking up all manner of interesting work off Mad Men, while Perry's off-beat brand of psychological terror-comedy should turn some heads. Meanwhile, who else saw flashes of Carnival of Souls near the end of the trailer? Because I sure did.

Do you feel this content is inappropriate or infringes upon your rights? Click here to report it, or see our DMCA policy.
alex ross perryelisabeth mosskatherine waterstonqueen of earth