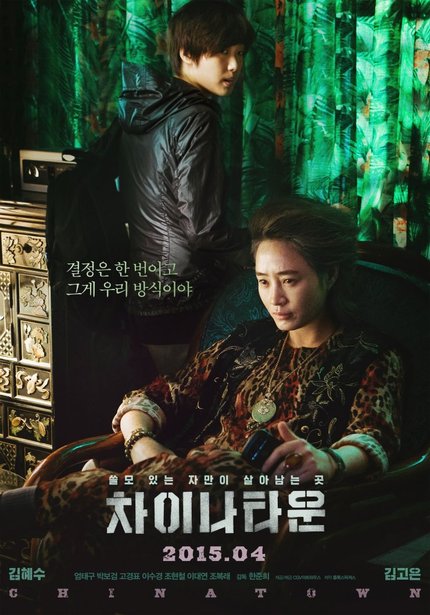 My final interview of the 2015 New York Asian Film Festival was one I hadn't initially planned to do, but I was so impressed by Han Jun-hee's stunning feature debut, the noir thriller, Coin Locker Girl, that I had to talk with him about it. Director Han spoke with me about the meaning of family and the inherent scariness of mothers.

Be warned, there be spoilers!


The Lady Miz Diva:  Please tell us the inspiration behind COIN LOCKER GIRL?

Han Jun-hee:  I am basically not a person who writes through inspiration, but the single focal point that I've been sort of focusing on in my life these days is the means of survival.  The means of living.  So, in the film, as you know, the words "useless," or "useful" keep coming up, and I feel that I'm the most useful when I'm on set, filming.

So, I was thinking of the basic question of why we live?  Why are we here on earth?  And also, if we are here on earth, then what is the right way to live?  These were certain themes that were occurring in my psyche, so that is where I found the place to start filming.

LMD:  Your lead actress, Kim Go-Eun, was at the Festival in 2013.  She was so new and inexperienced, but so open to doing challenging work.  What was it like to work with her?

HJ-h:  I feel that Kim Go-Eun is probably going to be one of the biggest actresses in the next generation of Korean cinema.  She's very smart and when we were filming, we pretty much got our shots on the first take - almost every shot.  She's an actress that really studies her material and really thinks long and hard about her characters and her choices, but then when she goes into filming, she really turns instinctively and works from a very pure instinct.  I feel among actresses of her age today, none really compare to her right now.

LMD:   I'm curious if in meeting the nice boy, Seok-hyun, Il-young begins to see a better way then turns her back on it, not believing it's possible?  Also, would all this catastrophe happen to the "family" if Mom hadn't made Il-young's boyfriend into a milkshake?

HJ-h:  Rather than Il-young thinking it was a better way of survival; it was that in encountering this boy, she feels something that she's never felt before in her life.  She got a glimpse of what was on the other side of her world.  And it's not so much a problem of her liking him or not, but just seeing the possibility of a different way of life.  Because she just got that little glimpse, that's why tragedy ensues.  When you think about it from the point of view of the Mom character, she feels that in this world, there is no such thing as a choice; that's the way things are, and there is no other possibility.

LMD:  That leads us to the amazing performance of Kim Hye-soo as Mom.  She's like a mix of Fagin from Oliver Twist and Darth Vader with a bad perm.  What did you have in mind for that character and what did Ms. Kim bring to the table that you didn't think of before?

HJ-h:  As a director, when I cast my actors, I do look at performance to see how well they act, but also, I really try to see what sort of attitude they have towards their characters, and what they have in themselves.  So for the role of Mom, when I was talking with Kim Hye-soo, I actually thought that she resembles a lot of what Mom had in the film.  For example, in Korea, Kim Hye-soo has been the top actress for a very, very long time, and also Mom in this film, she reigns over this empire, and she's been in that top position for a long time.  So I felt that they have certain qualities that really resembled each other, like if you're at the top for a long time, there's a certain coolness that you have because you know you're at the top, but then also there's a certain loneliness because you're just there alone.  So I felt that Kim Hye-soo had that, and I felt that it wasn't something completely new, and I wanted to ask her to bring those elements within herself to her performance.

In terms of what Kim Hye-soo has brought to the performance; she talked a lot about makeup and costuming.  She would say, "Can we flatten my belly a bit down?" {Laughs} And she also said you can frazzle up my hair a lot more.

LMD:  How does Mom see her "family"?  It seems like all is well until you step out of line and then you're hamburger with organs missing.  There's the scene with Chi-do, who left the "family" to start his own business, comes back to Mom for help, and she asks him "Are you my family?"  Do you think she actually cares about any of her charges?

HJ-h:   There's two expressions in the film "kajok" and "shikgu." There's not an equivalent in the English language because they both mean family.  I'll try to define the term "shikgu," that means people who eat together, or "mouths that eat together," so that usually means family.  But what I want to say is that becoming family, for us, too, it's not by choice; we're just born into a certain family.  So, for these people in the film, that also applies, as well.  Regardless of whether they like each other or not, they eat together, sleep together, and they work together.
I do feel like some sort of love or some sort of companionship may have sprouted from this being together.  I do feel like Mom has this, as well.  I think that she does care for the people she lives with.  However, the moment she reveals that she cares, the system comes tumbling down.  So in that sense, Mom is the system, so she has keep the system running, and in order to do that, she can't reveal the feelings she has for anyone.

LMD:  Are antagonists more scary when they're women? I think you tapped into something primal by calling her Mom.

HJ-h:  I didn't cast these people just because I thought they would be women; I was more interested in what kind of humans these people were.  When we think about male characters in noir films, it's usually more about ambition, but when we think about women, I feel like in society, women are perceived more often than men as the guardian of the home.  So that's where I started from.  I didn't start this because I thought it would be fun to go against the norm of having male characters, as you would normally see.  I wasn't thinking, 'Oh, hey, it would be fun to have women in noir, compared to men.'  That's not how it came about.  I just felt that women as the guardians of home would be an interesting concept.

And about there being something primal behind Mom, I feel like moms are the people we see the most, and we encounter the most, and we spent a lot of our time with, and I thought that was sort of an interesting point to delve into.

LMD: The film is dark from the outset and gets gruesome at times.  Did any of your producers advise to pull back on some of the heavier stuff?

HJ-h:  When I was talking to the actors about filming, I was telling them that this is a film about family; so from my point of view I don't feel like it's a heavy film.  I feel like it's a warm story about a family, but with a twist.

LMD:  People often explore the question of nature versus nurture, but Il-young doesn't really have great examples of either of those things. How do you see her humanity?

HJ-h:  My basic perspective on life is that no one is born because they want to be born.  We're just born into this world and we just try and live as well as we can.  I feel that Il-young in her way, is really trying her best to live steadfastly; to live a life according to certain rules.  And yes, these rules come from Mom, but I really want to ask people that if you were in a world that Il-young is in, would you be able to really pass judgment on the ways of her life if you were actually Il-young?

Do you feel this content is inappropriate or infringes upon your rights? Click here to report it, or see our DMCA policy.
Coin Locker GirlHan Jun-heeKim Go-eunKim Hye-sooKorean CinemaNYAFF2015