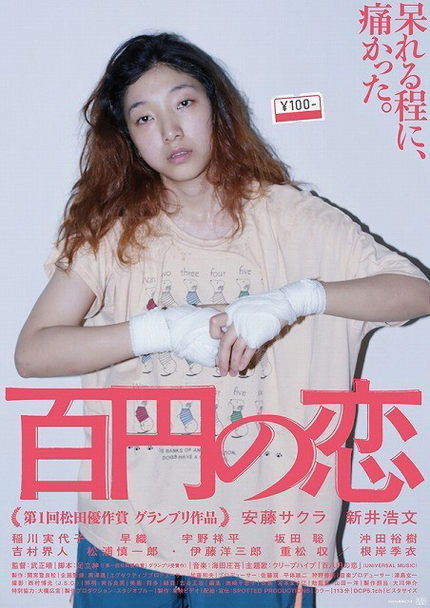 Her brilliant performances for some of her country's most notable directors have made Ando Sakura one of Japan's most formidable actors.  Here in New York to receive Japan Cuts' Cut Above award, Ando spoke with The Lady Miz Diva about her festival films, Asleep and 100 Yen Love, her thoughts on the Japanese movie industry, and what it means to be a filmmaker.


The Lady Miz Diva:  How do you feel about receiving the Cut Above award?

Ando Sakura:  For me, I think the award has not so much to do with what I have been doing thus far, but it's more an opportunity to consider and confront where the Japanese film industry is headed and what I will do in it.

LMD:  You've been involved in the Japanese film industry as an actress since you were teenager and you've grown up with a filmmaker father {Okuda Eiji} and sister {Ando Momoko}.  Please tell us your thoughts on the state of that industry, and what, if anything, you would like to see change or improve in the future?

AS:  I, myself, have always looked at my father and my sister, and my company is a very independent company.  We've always produced film in this very independent way.  Ever since I was little, my family has always been ready to sort of grovel to the ground and do everything that it takes to create and produce a film, so that's what I've always known.  As an actress, I've had the privilege of looking at a very different style of filmmaking in all the films that I've been involved in.

For me, it's very difficult to make any suggestions about the Japanese film industry, because I'm not yet at the position to call myself a filmmaker: I merely lend my physical body and my time, and by time I mean the time that I've been living up until now, my current time, who I am right now, and who I will become - I lend all this time to the filmmaker.

So I think I'm not yet in the position to refer to myself as a filmmaker and make a suggestion to the Japanese film industry, but at the same time, I think I'm at an advantage, because my position as an actress allows me to participate in various Japanese systems of filmmaking and across all different environments and genres.

LMD:  100 YEN LOVE, ASLEEP, PETAL DANCE and 0.5mm all feature women dealing with their lives in unusual ways or ways not commonly seen in film.  OUR HOMELAND was by female director, Yang Yong-Hi.  KUHIO TASIA, directed by Yoshida Daihachi, a male director whose films have a very female-forward point of view.  Is it a special incentive for you to put forward stories that look at women's issues in a different way or feature female or female-friendly directors?

AS:  I feel very fortunate and happy that I have been able to work on projects that are meaningful to women and female audiences, but with that said, I don't think I make a conscious choice to appear in female-friendly films.  For me, as an actress, I think I like to just span genders, or even creatures; I would take on snails or animal roles {Laughs}.  It doesn't really matter to me.  But like I said, I'm very happy that my projects are meaningful to women.
LMD:  Please talk about ASLEEP.  There are so many subtle themes about depression and self-esteem and coping with loneliness there.  What drew you to this role and how did you read the character of Terako?

AS:  First, I want to say about this film, as you pointed out, is a very specific portrayal of women in that what Terako goes through in her sleep; it's on a very physiological level.  It's something that all women can relate to, what she's experiencing.  This film manages to express that very well.  So I think that's what attracted me to it.
The other thing that attracted me to this film is that it is based on a Banana Yoshimoto story and it depicts a particular world, and I was very curious how Director Wakagi {Shingo} - he is also a photographer, himself - how he will capture that worldview.  As a photographer, Director Wakagi, his photos also capture the human physiology in a very specific, unique way, so those are my reasons.

One of the things the director expressed to me was that in this film, we don't necessarily need to clearly distinguish between reality and dreams, the past and the present.  So, to me, it was of course a challenge to express that ambiguity as an actor, but I was very attracted to the idea of wandering in between this reality and dream and past and present.  Also, the team that I worked with, including the producer and the costars, are the trusted team that I worked with in Our Homeland, so the chemical reaction of working with that team was something that was very fun and enjoyable for me, but I think above all, expressing that ambiguity was the draw for me.

LMD:  I understand that you did some amateur boxing while in school.  What was a difference between training then and training for your role in 100 YEN LOVE?

AS:  It's rather hard for me to say, to compare from my experience when I was in school, because I was only merely doing it for about a year as a hobby when I was in middle school.  It was a boxing gym that was very close to my home, so I think it's hard to say.
During the actual match, the scenes where we actually battle in the match, of course we have a specific choreography that we followed, but the screenplay called for me to be actually hit, so I took a lot of punches.

LMD:  That match looked brutal.  Were you safe?  Are you okay?

AS:  {Laughs} By now, I'm doing very well.
LMD:  I'm surprised that you said you don't consider yourself a filmmaker.  Having worked with some of the greatest directors in Japan, your sister and father are both directors; have you considered directing?

AS:  No. {Laughs} My answer is no, I wouldn't direct, but at the same time, I want to point out that on set while we're filming, I'm definitely one of the many filmmakers.  I feel that everyone on set are filmmakers, and we are all on an equal plane, in that sense.  But I think a part of me really feels that a film truly belongs the director, and I think it's because I've been observing the process of making a film up close that I feel this way.
It's difficult to point out exactly how I would identify myself, I don't know if filmmaker is the right word for it - film person... There's no exact word in Japanese for filmmaker.  So I'm definitely part of the filmmakers; I belong as one of the people for making the film.  When it comes to the question of who the project belongs to?  I'm not so sure.

I want to give an example; I think the first seed of the movie - that point does not belong to me.  I think the seed of the project is the director, the producer, and so on.  I think I'm one of the people that water the seed so that it grows into a tree.  I think I have that ability, definitely.  I definitely dedicate my time, and my life, and my physical body to the director and to the project, but I'm not sure about the word filmmaker and I'm not sure I would identify myself as such, but I definitely dedicate my whole being to the project and to the director.  So in that sense, I'm definitely a contributor.

That's definitely the reason why don't feel like being a director, at all.  I'm definitely a filmmaker, but that's my joy.  I get a tremendous amount of joy by being a filmmaker, so I'm satisfied with that and I don't necessarily have to be a director.

LMD:  Please give a message to our readers who have been waiting a long time for you to come to the festival.

AS:  I will definitely be back, so that I will be able to deliver all of my film projects to all of your readers and everyone.

Do you feel this content is inappropriate or infringes upon your rights? Click here to report it, or see our DMCA policy.
100 Yen LoveAndo SakuraAsleepJapan Cuts 2015Japanese Cinema