Destroy All Monsters: Sadness Scares The Shit Out Of Me 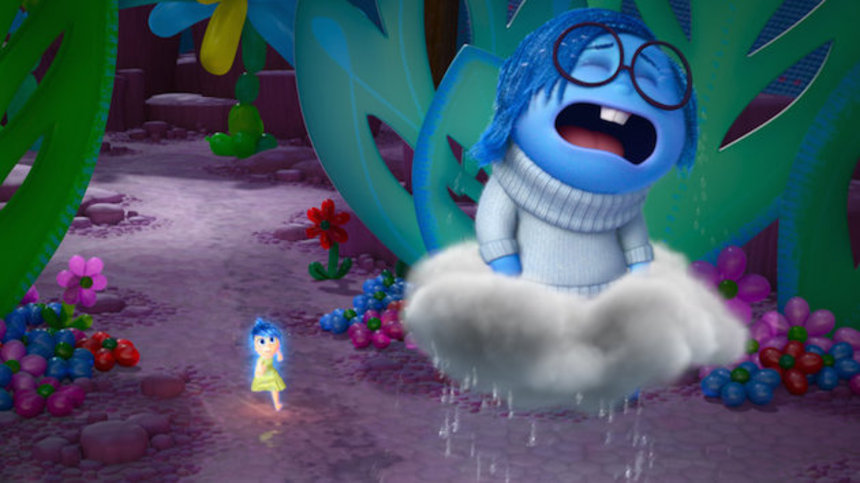 I'm not one of the adults who wept openly during Pixar's Inside Out, though I enjoyed the movie quite a lot; it's a terribly (almost terrifyingly) clever take on visualizing the connection between moods, memories, and personality.

I loved some of the subtler touches, like the fact that Riley's gender identity isn't settled yet, at least in the terms of the models the movie gives us: her parents each have all-male or all-female emotional teams, but Riley's still working with a handful of each characteristic. This is appropriate, of course: she's 11.

And most of all, I love the fact that Inside Out serves as a corrective to the cult of happiness that seems to persist in North America in the 21st century. We're a culture that has somehow come to believe that "happy" is "normal," and designs everything around us to subtly reinforce the idea that feeling good is what we ought to be doing - and that if we're not, something's wrong.

That's a lot of pressure, isn't it?

Even for those without chronic mood disorders like myself, the idea that feeling okay should be the resting state of our emotional lives is lovely in theory and absolutely poisonous in the alternate. Like so many other aspects of modern pop culture, it's also exceedingly reductive, boiling our daily experiences down to a black/white, yes/no, thumbs-up/thumbs-down Siskel & Ebertism.

Inside Out lovingly assures its young audience (and anyone else who happens to be in the theatre) that feeling sad for a portion, or even a majority, of the time, is a perfectly normal human attribute. (Another wonderful, subtle touch: Riley's mother's emotional brain is "led" by the sadness attribute. The film does not call direct attention to this, and its implications are left to the imagination of the viewer. But the emotion in charge of Mom's brain doesn't seem to affect her ability to live a normal human life.)

In Riley's brain, Sadness is played by Phyllis Smith, in what has been rightly heralded as an extraordinary performance (and matched so perfectly with Amy Poehler's deft and heartfelt performance as Joy that I'd happily watch another trilogy of movies featuring the pair, per Toy Story). The movie, in effect, is about letting Sadness be Sadness: suppressed and (maybe) even bullied by the other emotions to stay out of Riley's personality as much as possible, the story of Inside Out turns on the value Sadness brings to Riley's makeup as a whole, functional human being.

I appreciate the message, and think the movie does terrific things with it, even while I nurse a secret truth: Sadness scares the shit out of me.

Look at it this way: I suffer from migraines. They tend to be weather-related. They'll start as normal headaches and, when the conditions are right, will worsen and worsen till I'm hiding insensate under the duvet for a day, or stumbling through the Bloor/Yonge subway station believing a Terminator endoskeleton is chasing me.

Like many young men, I was raised with a healthy dollop of "you're just supposed to endure it" mentality when it comes to physical hardship. Worried that I was overdoing it on painkillers to deal with my headaches, I asked my doctor about other migraine-mitigation strategies.

Her response was nicely frank and pragmatic: use the painkillers. Every time. Don't let a headache turn into a migraine, ever; the minute you feel a headache coming on, treat it, before it becomes something worse.

Now for the other side of the particulars of my physical being: I have routinely suffered from depression throughout my life. Now, I am not equating sadness (or Sadness), the nominal human emotion that is part of our everyday lives and experience, with clinical depression, which is something else.

But. The migraine analogy, in my experience anyway, applies. A low mood, a bad day, a couple of sad memories in a row, can kick off a spiral in my head that will lead to a week-long depressive episode that will leave me unable to behave normally, go out, earn my living, and in some cases even contemplate bothering to continue to work through any of this at all.

Those are heavy stakes for sadness, and I struggle repeatedly with the line between the hilariously pessimistic blue doll in Inside Out, whose inclusion in that movie (and in my head) I cherish and even delight in; and the vile black Nothing of which Sadness is the unwitting herald, like Gmork in The Neverending Story. That cloud is forever staring at me from across the ocean of my mind, threatening to make landfall; and I can't let it, if there's anything at all I can do about it.

I lucked into one of those brains, I guess, where it's more complicated than merely finding a successful emotional balance and the personality such balance brings. I have, at best, a burden of vigilance against my own emotions that I'll probably bear for the rest of my life, and at worst, an outright fear of them: because each of those cheery cherubic muppets in my head might, on the wrong day, set off a chain of events that might try to kill me.

No, Inside Out doesn't owe me or anyone else a contemplation of this alternate relationship between the emotions and the self; and as with all great pop art, it supplies us with a wonderful new articulation frame for some basic human ideas - a set of memes we'll probably use interchangeably with our children and ourselves for years to come to develop language around tricky concepts that probably remained wordless until very recently.

That gives me hope. So does Phyllis Smith's Sadness, even if she represents something I have to watch from across the room, rather than giving her the hug I'm sure she needs.