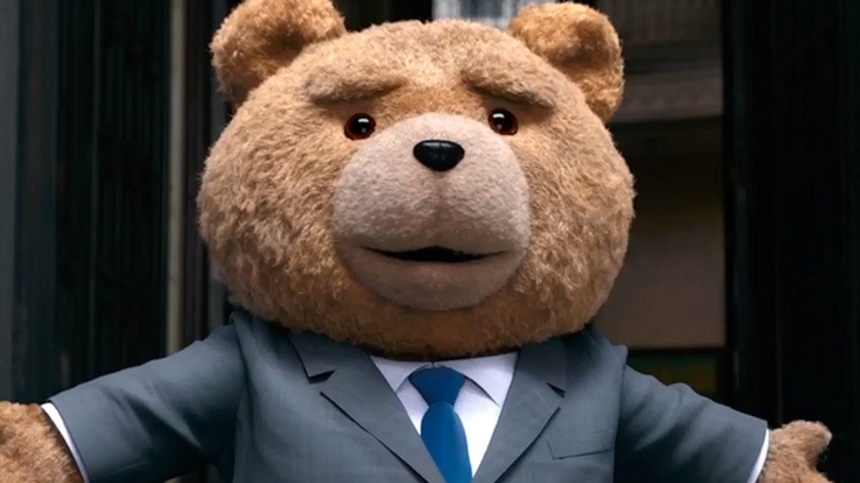 Seth MacFarlane and Mark Wahlberg team up once again for Ted 2, an outing that is just as bawdy as its hit predecessor, but more scattershot, even by the standards of the mind who brought us Family Guy.

Ted 2 kicks off with a dream wedding for our furry anti-hero to Tami-Lynn. Post-opening credits, it's a year later and the couple are throwing things at each other as they argue over bills. Lamenting his marital woes, someone suggests that having a baby could bring them closer together, an idea Ted quickly warms to, though not out of any particular desire to be a father. With the help of his best friend John, Ted, who of course lacks genitalia, tries every means to get a child but eventually hits a dead end when an adoption agency refuses him on the basis that he is not actually a human being. When the news breaks out and he loses his job and credit cards, Ted and John enlist the help of young lawyer Samantha to get them through a civil rights suit and prove that he isn't merely a piece of property.

The above is a lengthy synopsis, yet it still excludes a few sideplots. Much like an episode of Family Guy, a lot of comic asides and misdirection pushes the real aim of the plot far into the running time. As we meander our way towards the crux of the story, we are subjected to a bunch of big ticket but frankly disappointing (not to mention mostly homophobic) cameos, though I won't spoil them for you. Of course the plot is only ever going to be secondary to the gags in a comedy, but Ted 2 is less steady in its aim than the original, and the schmaltz factor of the second half, echoing such classic fare as Mr. Smith Goes to Washington and Kramer Vs. Kramer, does little to help things along.

In fact, MacFarlane demonstrates a great fondness for a bygone Hollywood, including with a dead serious Gene Kelly-esque number for its opening credits, and a throwaway Jurassic Park gag, which, though well-timed given its release date's proximity to Jurassic World, drags on for far too long. Alongside the prurient and often mean-spirited humor, it makes for an awkward balance. Though, in a year where a catholic bastion like Ireland resoundingly voted in favor of marriage equality, I suppose that makes the film's homophobic and misogynistic humor appropriately old-fashioned.

Then again, Ted 2 certainly has a lot more going for it than A Million Ways to Die in the West, MacFarlane's dreary Western spoof from last year. When the jokes do land they work very well and this is largely a result of the charismatic bond between MacFarlane's Ted and Mark Wahlberg's John. Keeping up with the duo is Amanda Seyfried, who replaces Mila Kunis as John's love interest. A pretty and laid back lawyer with a collection of bongs, she's immediately welcomed into the tight circle.

The civil rights angle, or rather the question of Ted's status as a human being, is tricky territory for MacFarlane and co., as the many allusions to previous and current civil rights struggles don't sit comfortably alongside the film's humor. Furthermore, they make the heartfelt courtroom pleas for basic human rights feel all a touch disingenuous.

Had the film focused more on its characters and spent less time mashing jokes together and cutting to odd asides, such as synchronised dance moves in a library montage, the film may have flowed better, but as things stand Ted 2 is little more than a disposable distraction that may irritate just as much as it tickles.