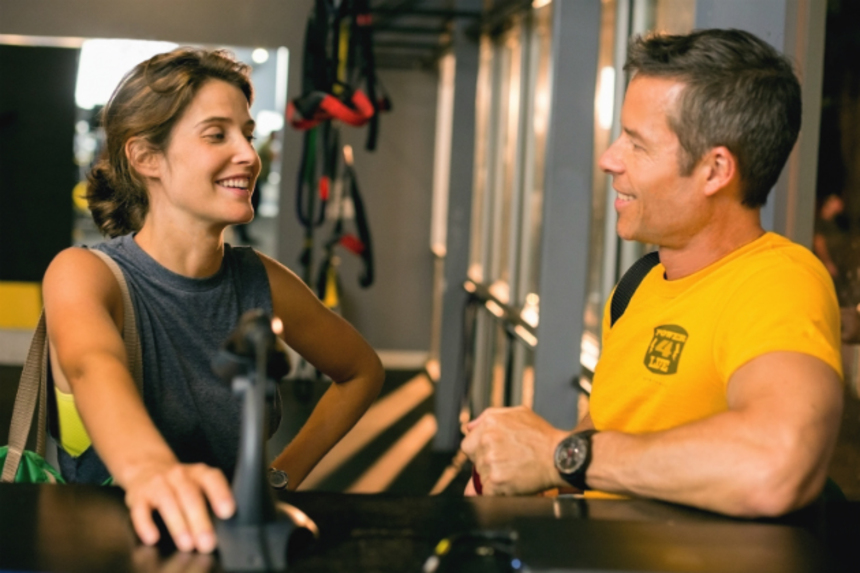 Shot in murky black and white with a primitive camera, Computer Chess focused on programmers at the dawn of the personal computer era in 1984. Shot with crystal-clear digital precision, Results fixes its eye on the twilight of the personal fitness era, i.e. the modern day.

It's a three-hander about Trevor (Guy Pearce), the ambitious owner of a fitness studio; Kat (Cobie Smulders), a fiercely-dedicated physical trainer; and Danny (Kevin Corrigan), an out-of-shape, newly-wealthy customer. Each is self-absorbed to an alarming degree: Trevor is fixated on opening a new, larger studio; Kat and Danny are both unhappy and angry, without knowing how to deal with their emotions, or what they want to do next.

As a director, Bujalski has experimented lately with his visual style, but as a writer, his characters remain consistently vague and irritating, sometimes appealing and sometimes appalling. That's been a hallmark of all his feature films, dating back to his debut, Funny Ha Ha (2002), and including Mutual Appreciation (2005) and Beeswax (2009).

The early portions of Results reveal Danny to be a particularly unwieldy social being. Recently divorced and recently rich, he has become completely unmoored. He resembles a bear that's been in hibernation and is still startled by sunlight. Intellectually, he's aware that isolation is not good for him, and a yawning abyss of deep depression awaits if he doesn't seek out new friends and new habits. Emotionally, however, he's incapable of doing much of anything to help himself. He joins the local "gym" as a desperate stab at normality but his true motivation is his physical attraction to the very comely Kat, whose brusque manner and fit body are catnip to him. Danny's paid for training sessions to be held in his newly-rented house, the kind of outlandishly-sized house that a newly-rich man might secure without having any idea how to fill it up. Really, though, he has designs on Kat, and tries to leverage the situation to his advantage.

That sets the "plot" in motion, although Results is far more fascinated with the characters and how they react to each other than anything else. It feels entirely traditional, in that each of the three leads just happens to be at a turning point in their lives, even if they don't realize it. Other people -- played by the likes of Constance Zimmer, Giovanni Ribisi, Anthony Michael Hall, and Brooklyn Decker -- jag in and out of their lives, supplying a bit of contrast and the promise of interaction with "normal" society.

Bujalski's writing, as self-indulgent as it comes across at times, emerges triumphant by the conclusion, wresting emotions from hidden corners of the soul. Results often plays light and jumpy, as though it's a comedy, even though Bujalski is not a comic writer and I don't recall any "jokes" being told or physical gags enacted. Instead, the film explores the absurdity of the human condition, in which individuals imagine that their problems are worthy of their complete and total attention when, of course, we're all just tiny specks of dust in an infinite universe.

I think that makes Results a pretty funny movie, a piercing examination of how easy it is to be shallow when no one's around to tell you different.

The film is now playing in select theaters throughout the U.S. It expands to additional locations on Friday, June 19. It's also available to watch via various Video On Demand platforms.

Do you feel this content is inappropriate or infringes upon your rights? Click here to report it, or see our DMCA policy.
Andrew BujalskiCobie SmuldersGuy PearceKevin CorriganGiovanni RibisiComedyRomance