Destroy All Monsters: It's A JURASSIC WORLD, And Apparently I Don't Live There Any More 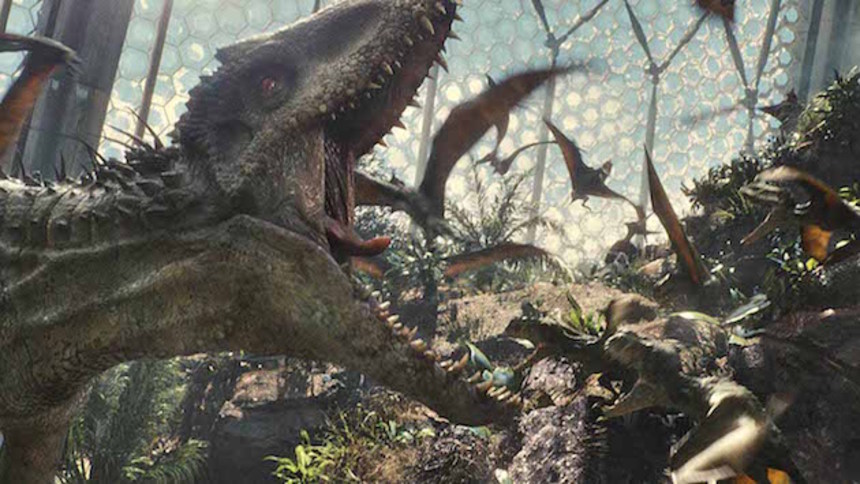 It's a potent image, as others have noted: a dangling great white shark, purpose-built to remind us of Jaws, being lazily consumed by a gargantuan CGI mosasaur, leaping out of the water at Jurassic World in front of a stadium full of spectators who apparently didn't get the memo re: Sea World being awful.

(Or Isla Nublar being a human slaughterhouse, for that matter.)

The single sequence condenses down into about 40 seconds the entirety of the past 40 years of blockbuster filmmaking. (Jaws was released 40 years ago this week.) I'm nearly 39 years old, and the 40 years in question seem to have seen the rise, peak, and fall of my ability to locate a movie like Jurassic World within my sweet spot.

Rarely in my life have the tastes of the blockbuster masses and my own been so far out of step. It happens, but normally, when something is an out-of-control hit, even if I don't warm to it personally, I can see what the rest of the audience is getting out of it. (I've been doing a podcast on that subject for ten years.)

Jurassic World is an out-of-control hit. It is now the record-holder for the biggest opening weekend in history; it crossed the half-billion dollar mark in less time than any movie ever; it will now almost certainly be the highest grossing film of the summer, and quite possibly the year.

That is an amazing thing, from a moviegoing perspective. With The Force Awakens ahead and Avengers 2 and Furious 7 behind us, we were already looking likely to add three 2015 films to the all-time top ten grossing films.

Mockingjay 2 might have made a fourth, but now Jurassic World definitely makes the list as well, meaning that 2015 will break another record. This makes me glad: it means that people are still going to the movies, and going to the kind of movies that (generally speaking) are the movies I love most.

Except, Jurassic World sort of baffles the shit out of me.

It isn't terrible - it's better than Jurassic Park III - but it's pretty undercooked, even for this franchise. Jurassic Park was undercooked too, but rode the wave of its own novelty to box office gold; back in '93, I felt like I had really seen dinosaurs for the first time, a trick that can only work once.

Whatever. It's unreasonable to expect a movie like this to have its subtextual cake and eat its entertainment value too. (For a movie that tipped the balance in the other direction, see last year's Godzilla.)

But is it unreasonable to be astonished that something as rote as Jurassic World nonetheless managed to suck down half a billion bucks in three days? There aren't that many people my age who lost their proverbial (or not proverbial) cherries at the movies in the summer of 1993; and call me a far-out old fogey, but I woke up Friday morning believing pretty concretely that "these kids today" couldn't give less of a fuck about CGI dinosaurs.

I'm not saying that because kids suck; I'm saying it because this generation has CGI everything. When Daenerys Targaryen can have a heart-to-heart with a fully-rendered dragon on an Irish hillside on Sunday night, who the fuck needs a mosasaur?!

Where's the value proposition in Jurassic World? What makes this movie a perfect storm of summer entertainment, and not Mad Max (more worthy), Tomorrowland (more original), or for that matter, Avengers 2 (exactly as commercial, CGI, and kid-friendly - and now apparently a runner-up)?
I've got no good answer, though my best theory is a wholly depressing one: to achieve this kind of market fortitude in 2015, your blockbuster must be exactly this less-worthy, less-original, and less-whatever-Avengers-2-isn't.

Jurassic World is a masterpiece of "good enough."

It will offend absolutely no one. Even the fracas over Bryce Dallas Howard's heels does little more than subtly reinforce Meninism values while not being as out-and-out problematic as the Red Room scene in Age of Ultron.

JW is a movie about white people going to the equivalent of a shopping mall and getting attacked by made-up monsters that can't possibly be analogized to anything troubling enough to be happening in the real world. (The big emotional crisis in the movie? Divorce. Welcome back, 1982!)

The movie is safely non-inventive. It's based on a cherished, decades-old property; it's directed competently by a guy most people have never heard of, and it stars that affable fella from that movie you liked. It does exactly as advertised and not a single thing more, because veering from the advertised script might risk delighting some people, while alienating others.

Yeah: Jurassic World is going to make a fortune, all right. For an incredible number of people, it's basically the perfect movie.

Do you feel this content is inappropriate or infringes upon your rights? Click here to report it, or see our DMCA policy.
Colin TrevorrowJurassic ParkJurassic WorldSteven Spielberg