Blu-ray Review: THE STRANGE CASE OF DR. JEKYLL AND MISS OSBOURNE, A Twisted Tale Of Sex And Violence 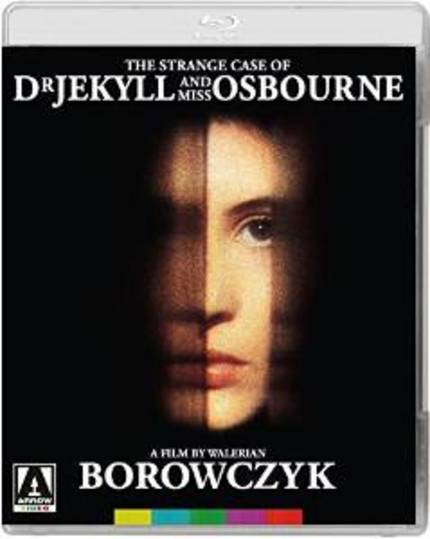 Hot on the heels of Arrow Video's incredible (and incredibly sold out) Walerian Borowczyk Box set from last autumn, the company has dug deeper into the director's idiosyncratic oeuvre to deliver what is likely his most straight ahead horror feature, The Strange Case Of Dr. Jekyll And Miss Osbourne, also known as Dr. Jekyll And The Women. This film, while not straying too far from Borowczyk's core themes, definitely delivers a lot more blood to go along with its lust than most of his prior works (Erzebet Bathory's co-starring appearance in Immoral Tales notwithstanding). It's truly a fascinating film for adventurous viewers with a little patience and a lot of curiosity.

The Strange Case Of Dr. Jekyll And Miss Osbourne comes at a time in Borowczyk's career that marks a very definite turning point from prolific working artist to his later works as a hired hand scratching to bring his own influence to his products. As such, the film is familiar as his work, and at the same time feels a bit strained to fit the expectations put upon him to fit the new paradigm in which he was working. The result is a horror film, of sorts, that places male sexuality and virility on the chopping block in favor of the overarching carnal drives of the human animal. To some it will be a revelatory, intense viewing; while to others it will some across as overindulgent twaddle. Frankly, both are reasonable interpretations, which is what makes the film so remarkable.

Tonight is the engagement party of Dr. Henry Jekyll to his lovely fiancee, Fanny Osbourne (both a reference to RL Stevenson's real life spouse, and a coincidentally apropos pun given her voracious sexual appetite). Just as all the guests arrive, news appears that a maniac has hack and slashed his way though the nearby streets, and the party guests alternately scramble and assemble to find protection and perhaps stop the attacker. However, Miss Osbourne and Dr. Jekyll are acting a bit strangely, I wonder what the trouble could possibly be?

Borowczyk's film is filled to the brim with the requisite blood and violence that early '80s crowds expected in their horror films, but Jekyll also delivers intellectual thrills beyond these visceral ones. Udo Kier, as the suave and mysterious Dr. Jekyll, is a slimy little rat in the most endearing way, a man who maneuvers those around him to fit his own desires, and when the get in his way, he simply removes them. His fiancee, played by Marina Pierro is a ravenous sexual animal who has trouble keeping it in her pants and wishes to marry as quickly as possible to get to the good stuff. When the villainous Mr. Hyde makes his appearance as an creature of almost alien like facial features and a prodigious phallus built for business, it takes only a few moments for Fanny and Hyde to connect, vigorously.

The film's visual style is very well in tune with Boro's previous works which, of course, throws it out of sync with other early '80s horror pictures. Many static camera shots, expressionistic compositions, and non-linear editing designed to mimic foreshadowing succeed in throwing the viewer off kilter perhaps more often than many viewers would be comfortable with. However, the ethereal nature of the film's narrative style and languid shooting, along with the arch performances from Kier and co-star Patrick Magee, turn the film from a straight forward horror film to something much more challenging and interesting to the curious viewer. The pace is a bit of a challenge to get into at first, but after the first few scenes, if you're able to find yourself following along, you should do just fine. All in all, Dr. Jekyll is a fascinating look at Borowczyk's career taken to one of its possible logical ends, and I definitely endorse checking this one out.

Holy shit, where to begin? Arrow Video's heroic effort on the Camera Obscura Boro box set was an awfully high bar for this follow up release, however, I've no doubt that the connections made there served this release well. The restoration is gorgeous, especially considering that it is the first digital release of the film anywhere in the world, previously it'd only been available in horribly damaged bootleg VHS copies. This Blu-ray is beautiful and sounds great in its bizarre variety of post-dubbed options.

One thing that the Borowczyk box set had in spades was supplemental material that significantly helped the casual viewer connect with an artist whose work can be frustratingly obtuse at times. The Strange Case Of Dr. Jekyll And Miss Osbourne nearly outdoes even that mighty effort with a wealth of bonus material that would make Borowczyk himself impressed. There is an audio commentary which features an interview with Borowczyk and many of his collaborators that many fans will be very excited about. However, my favorite pieces on the disc are the appreciation by Boro project co-lead Michael Brooke, an expert in eastern European cinema and tireless advocate for Borowczyk's work, and a brief documentary on the composer for the film, pioneering electronic music artist Bernard Parmegiani. It's one thing to read a bunch of scholarly work about an artist, it's another thing entirely to hear the enthusiasm in an academic's voice as they describe their own passions.
The extras don't stop there, we get interviews from more of Boro's associates and performers including Miss Osbourne herself, Marina Pierro, a couple of short films, one by Ms. Pierro and one unreleased Borowczyk piece, as well as an appreciation by another Boro fanatic and expert, Daniel Bird, who is Brooke's partner in the Borowczyk project, and a man largely responsible for getting the ball rolling in the first place.

The Strange Case Of Dr. Jekyll And Miss Osbourne is a fascinatingly singular work, perhaps more reminiscent of Europe's nascent arty thriller genre film than the horror label with which it was ultimately saddled. I cannot recommend this disc highly enough, a bargain at any price.

The Strange Case of Dr. Jekyll and Miss Osbourne

Do you feel this content is inappropriate or infringes upon your rights? Click here to report it, or see our DMCA policy.
Arrow VideoBlu-rayHorrorWalerian BorowczykRobert Louis StevensonUdo KierMarina PierroPatrick MageeGérard Zalcberg

More about The Strange Case of Dr. Jekyll and Miss Osbourne