Review: SAINT LAURENT, Drinking, Screwing Around, And Smoking Like A Chimney 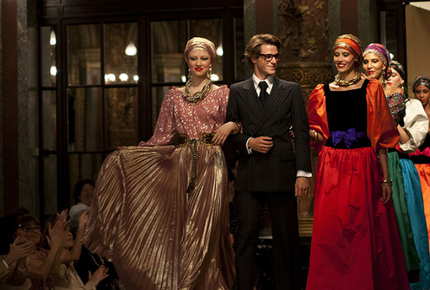 The first was the paint by the numbers biopic Yves Saint Laurent, a gentle, actor's film made with the full collaboration of the late designer's estate. Next came a second, unauthorized version, a moodier satin draped art film titled Saint Laurent, with French star Gaspard Ulliel in the lead role. Befitting its fashion industry subject, the film is aesthetically rich as it is gloriously superficial, though not always the better for it.

The structure loosely follows your regular biopic beats - the carefree early days giving way to massive substance abuse giving way to comeback triumph - but only just. Unlike so many others of the genre, there's no moralizing here and no attempt to ascribe an overarching theme to his life. Here the superficial works to everyone's benefit. There is no key to unlock the Yves Saint Laurent depicted. He's a fashion genius from the first frame forward because that's just who he is, and he's going to binge on blow, booze and beautiful boys because that is his wont.

The film is at its very best illustrating those moments. Director Bertrand Bonello is master sensualist and relishes every opportunity to create a mood, favoring the bombastic more often than the subtle. At the height of his creative peak, YSL spends most of his (screen)time in glittery nightclubs, and those scenes, where sex, drugs and rock and roll collide and collapse onto one another, are intoxicating. At one point, Yves finds himself transfixed by a model he spots from across a club. As she glides off her banquette and onto the dance floor he follows, coming from the other side of the room to meet beneath the strobe lights. He begs her to come model for him and she continuously declines, but it doesn't matter. The lights soar, the music throbs, and their matching bodies - drinking, smoking and dancing in lockstep - belie the empty words. Any distinction between business and pleasure is blown apart. Their bodies sway as the music mount and mounts and mounts. And then we cut. The next scene they're working together on a shoot.

The implication of that scene does not stay thematic or subtextual for long. It is very bluntly voiced at one point by Yves' romantic and business partner, Pierre Bergé (Jérémie Renier). The value of the YSL brand, he states, lies entirely with the man himself. People buying branded purses and cosmetics and perfumes are buying them not for the inherent quality of the object, but to bask in the refracted glow of the name stamped on it. In other words, Yves' job is not just to create but also to consume. To be conspicuous and unrestrained. He may occasionally design fashion, but his full time job is being Yves Saint Laurent.

This is a limitation that hampers both the character and the film. Renier, as Saint Laurent's partner, accosts himself well enough, though he's never given much to play beyond business eager and lover scorned. Léa Seydoux, as friend and muse Loulou, is asked nothing more than to wear fashionable turbans and pout. She has a decent amount of screen time, but no more than five lines of dialogue.

There are plenty more figures like that: showing up to look fabulous, lingering for a scene or two and then heading off without much impact. In some ways, I can appreciate the film's commitment to replicate in form its main character's temperament in life. If Saint Laurent the character has little patience beyond the skin deep and well adorned, then neither will the film bearing his name. It is an over the top yet oddly empty film about an over the top, oddly empty existence.

Still, two and a half hours of well-mounted superficiality can wear a bit thin. The film's final thirty minutes for example, which follows the preparation and execution of his 1976 collection, will only work if one is already knowledgeable about Haute Couture so lovingly displayed.

The sequence -- the film's climax essentially - of his 1976 show is handsomely shot and bracingly edited, but it doesn't really amount to anything cathartic. We're told that the work is groundbreaking, but never given the reason why. Just that he drank a lot, screwed around and smoked like chimney, and somewhere along the way designed these great clothes. C'est chic, n'est ce pas?

Review originally published in slightly different form during the Cannes film festival in May 2014. The film opens in New York and Los Angeles via Sony Pictures Classics on Friday, May 8, before expanding throughout the U.S. in the following weeks.