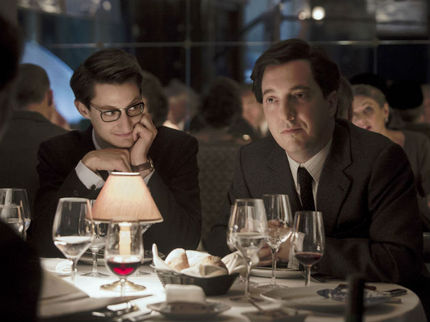 There are two biopics out this year on Yves Saint Laurent, the iconic French women's fashion designer. Considering his importance in French fashion culture, this is probably not surprising (at least that there might be more than one film about him; two in one year is likely just a coincidence).
The first one to be released is based on the biography by Laurence Benaim and directed by Jalil Lespart (most of whose work is in acting). Anyone with an interest in fashion will likely be drawn to the wonderful renditions of his early work; anyone looking for an interesting story will probably be disappointed.

I'm hoping the next one (by Bertrand Bonello, a more experienced director) might be a bit more, well, interesting. While not boring per se, Yves Saint Laurent is a standard, paint-by-numbers biopic. It covers the significant part of Saint Laurent's career, his rise and fall and rise, his personal life and problems; if you don't know much about him (which I didn't) it's some education. But Saint Laurent's life is not necessarily any more interesting than that of the average celebrity, even considering some early problems with mental health issues. But the film is kept from sliding down the slippery slope of superficiality by an incredible lead performance from Pierre Niney.

The story begins in the late 1950s, when Yves is hired by Christian Dior to design for his fashion house. Almost immediately, Yves stands out with innovative designs and popularity. Though painfully shy, he meets and falls in love with Pierre Bergé (Guillaume Gallienne), who would become his lover and business partner. Not long after he takes over Dior (after the elder designer's death), Yves is drafted into the army. He never fights due to his manic depression, though, and he is fired from Dior. He subsequently opens his own fashion house, and the rest of the film follows his relationship with Pierre, his fashion's success, his drug and continuing mental health problems. 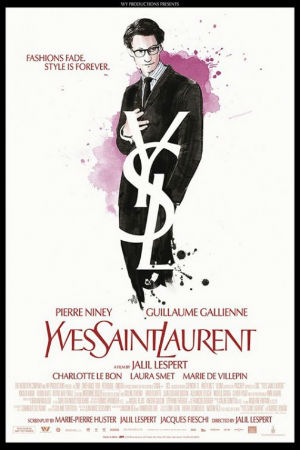 To me, the purpose of a biopic is to learn more about a person than we can find out from the usual press outlets, to see the figure behind the persona, how their work affected their person, and vice versa. And this film does do that: it shows Yves' early struggle with his homosexuality, his family's life in the then-French-occupied Algeria and the ensuing post-colonial political aftermath, his drug and alcohol problems, and the evolution of his designs over two decades. The film certainly looks beautiful, as befits a film about style, the early scenes take their cue from A Single Man with clean lines and impeccably dressed characters, the later ones focusing a bit more on Yves' mental state with a cleverly selected soundtrack of popular music from the 1960s and 1970s.

But while a given spectator might know little about Yves, nothing in the story comes as a surprise. Perhaps it would be better to say, it has a certain predictable pattern; once the spectator is made aware of Yves' problems, the film doesn't give enough in-depth scope to those problems to allow for darker moments, to let them simmer. Instead it just moves on to the next scene, to the point of feeling almost a cursory look. We are given the how and the why of Yves' triumphs and troubles at only the most basic level.

And this might have led to a very dull film, were it not for Niney. Certainly, he looks like Yves, which I assume was part of the reason for his casting. But this would never be enough, and Niney knows this. It's easy enough to mimic a famous person's known mannerisms and vocal cadence; it's another to embody the side not seen by the public.
Certain kinds of mental instability might seem to be easy to portray; but Niney focuses every part of his body for both Yves' high and low moments. His eyes show the depth to which his imparts Yves' difficulties in overcoming his weaknesses; his pain at the thought of going to war; his pride and ego with his triumph and its negative effect on his relationship with Pierre. Yves was a genius, sensitive and reserved, but he was also a rich kid who triumphed too early for a more mature development. Gallienne is the older and more experienced actor and also gives a wonderfully nuanced performance, and so the two actors play brilliantly against each other.

While the film spans only 20 years of Yves' long life, it would have benefited from actually covering a shorter time and getting more in depth. The latter third of the film just feels repetitive, with a continual cycle of drinking, drugs, betrayal and reconciliation (and not enough of the fashion that was more focused in the earlier part of the film). It will be interesting to see the other version of the designer's life, to see there is more to the designer's story, or if whomever is playing him can surpass Niney's tremendous performance.

Review originally published during the Berlinale in February 14. The film opens at Film Forum in New York on Wednesday, June 25.