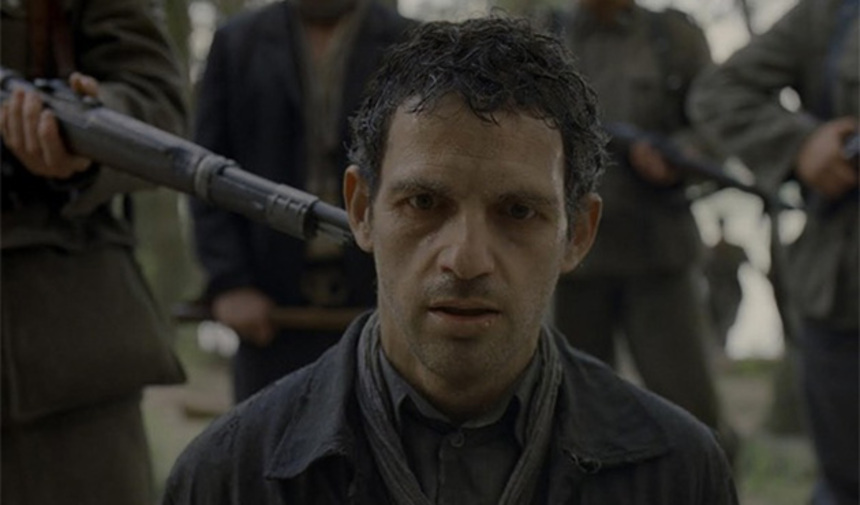 Son of Saul has two obvious strikes against it. It's a handheld, close POV movie, usually the sign of filmmakers too austere to pick up a tripod, eschewing good framing in favour of shakycam "grit." Then there's the subject matter, as it's pretty hard after some seven decades to create a truly unique take on the horrors of the Holocaust.

It's all the more surprising, then, that this film manages to exceed expectations on both these fronts. First of all, this is one of the most sterling examples of a wandering camera, its technique beautifully executed with almost Kubrickian precision. Many of the most disturbing scenes are glossed over by the background bokeh, the gauzy distance between near and foreground creating an often dreamlike (or nightmarish) division. When the focal range becomes sharper, bringing more into relief the travesties occurring in the midst of the protagonist, it's done so with great artistic flare. Visually, this film's a stunner, and the 35mm presentation framed with a 4:3 aspect and feathered edges gave the film a claustrophobic and grainy nature that's nostalgic without pandering to the look, making for an entirely gripping visual presentation.

Similarly, the narrative of the story is both wrenching and revelatory. Son of Saul is a collision of numerous genres -- a war film, a melodrama, a deep allegory, a story about a father and his "son" -- and all the elements combine into as rich a portrayal of the shoah as any of the acclaimed masterpieces that have tackled the subject. The documentary-like feel is never played for gore or cheap shock, yet its wrenching scenes are both memorable and faultlessly executed. It is this fine balance that gives the film its most effective moments, never slipping into the maudlin or trite, nor lingering too long on the hellscape. This is an infernal view of a deathcamp indeed, one that might have make Dante himself blanch, yet within the complicated ethics of Jews helping murder Jews there's a core humanity, both beautiful and tragic.

Told in a mix of Hungarian, German, Yiddish, and a smattering of other European languages, there's a richness to the sounds of the polyglot cacophony that I'm betting (despite its best efforts) the subtitles only hint at. Still, so much of the film is told in the wonderful faces of the assembled cast that it almost plays as a silent film for much of the running time.

Géza Röhrig plays Saul, and oceans of emotions pour over his expressive face as the narrative plays out. Joined by a series of various performers wearing similar clothing, one could easy lose track of who's who, yet once again, to the filmmakers' credit, the movie keeps the audience comprehending the narrative when required, while creating some unsettling moments of controlled confusion when called for.

Director László Nemes is Hungarian born but Paris raised, and worked as Béla Tarr's assistant on several films. It may be heresy to declare, but Son of Saul is both more moving and in some ways more accomplished than that of the declared master of Hungarian cinema, no small feat for the relatively young Nemes.

Once again, this isn't simply a holocaust drama that does what so many do, letting the incalculable horror of those events provide the emotional heft while tacking on a semblance of narrative. This is instead an almost microscopic look at a group of very specific individuals who serve as both prisoner and guard (or, in a related case, as both healer and butcher). By focusing on this very specific circumstance, the greater whole is further illuminated, an untangled paradox that's often at the heart of great works of art.

Nemes allows the audience deep empathy for characters that are certainly complicated, if not downright corrupt and sinful, while allowing impossible decisions within an impossible situation to connect with the audience deeply. The pace, style, performance and storyline all culminate in a remarkable, coherent whole that's truly remarkable.

Son of Saul is, for me, one of those magical festival moments, a film I went into with zero expectations (not even knowing the title or storyline), only to be left dazed and shattered upon its conclusion. This is a film that easily stands with the giants that have tackled the subject matter, crafting a new and vital facet of an impossibly complex story, and doing so in a way that's both riveting and revealing.