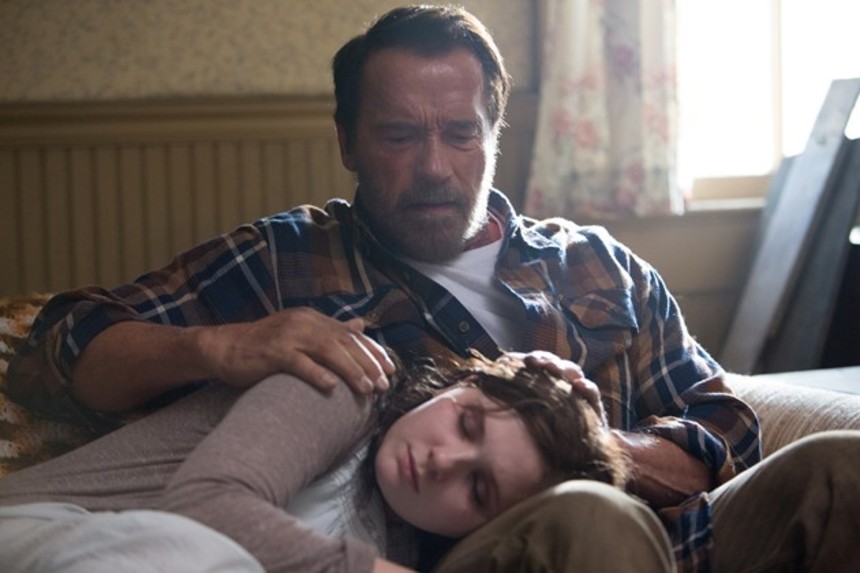 Geoff Gilmore, chief creative officer of the Tribeca Film Festival, in his introduction to the world premiere of Maggie, the first feature by Henry Hobson - starring some guy you may have heard of named Arnold Schwarzenegger - called the film "a cross between a zombie movie and a family melodrama." That's as accurate a description as any for what this film aspires to be, and largely achieves.

The zombie genre - and there's more than enough films, not to mention TV, books, comics, etc., to qualify as such - has proven elastic enough to encompass many variations and combinations. Maggie, as Gilmore indicated, combines the zombie movie with an arthouse-friendly family drama. It's an elegantly made, moody and restrained piece, capped with an equally restrained and quiet central performance by Schwarzenegger.

The film begins in the midst of an epidemic known as the "Necroambulist virus." (The word "zombie" is never used.) The world is slowly recovering and getting the epidemic under some control, with those afflicted by the virus housed in quarantine medical facilities.

Wade Vogel (Schwarzenegger) is driving to one of these centers, having spent two weeks looking for his daughter Maggie (Abigail Breslin), who has been bitten and has been placed under quarantine. Maggie had run away from home after she became infected to deal with her disease on her own and protect her family from what would happen when she got worse.

Wade eventually finds Maggie, and calls in a favor with a doctor he knows at the facility, who allows Wade to take her back home with him to his farm. The doctor warns Wade to watch Maggie carefully for the signs that indicate her inevitable turn into the late stages of the illness, which will lead into her attacking those around her when her insatiable hunger for flesh sets in.

Wade brings Maggie back to his Kansas farm, where he lives with Maggie's stepmother Caroline (Joely Richardson); Maggie's own mother, Wade's first wife, has died years before. Wade and Caroline's two other children have been sent to live with Caroline's sister for safety, so that they can look after Maggie.

The rest of the film takes place almost entirely around the family home and farm, where Wade and his family must cope with Maggie's progressively worsening disease. Unlike most zombie films, there aren't any big action set pieces, with hordes of zombies attacking normal humans. Maggie mostly takes the form of an intimate chamber piece, centering on Wade's grief and helplessness over what is happening to his daughter. As the doctor explains to Wade at one point, he has the choice between equally terrible options: putting her back in quarantine to die with strangers; giving her a medical concoction of the sort given in quarantine that will cause pain and only delay the inevitable; or Wade could, as the doctor advises, motioning to Wade's rifle, "make it quick." Wade tries to create of his home a fortress to protect them from the outside world, but that becomes increasingly difficult. Wade has to kill a couple of neighbors who have turned into zombies, and the local police threaten to forcibly take Maggie into custody. Still, Wade tries to preserve some sense of normalcy for Maggie, as they reminisce about her late mother, and Maggie spends a night hanging out with old friends. But even while with her friends, Maggie is reminded of what awaits her; her boyfriend has also been infected with the virus.

Maggie doesn't offer the sort of midnight-movie genre thrills one would expect from a zombie movie, one starring Arnold Schwarzenegger, no less. It is much moodier and slower-paced than that, with somber, sepia-tinged cinematography by Lukas Ettlin, which, along with its Midwest setting, often evokes the non-Emerald City sequences of The Wizard of Oz. David Wingo's equally moody score adds to the overall downbeat effect.

John Scott 3's screenplay, which was once on the Black List of acclaimed unproduced screenplays, delivers an unusually emotional take on the zombie movie, treating it in a similar way as a film about cancer, or any other sort of terminal disease. And although a sad sense of inevitability sometimes threatens to smother the proceedings with oppressive melancholy, the intense emotionalism of the piece remains compelling.

As for the movie's star, the cliché will be that it's Schwarzenegger as you've never seen him before, but in this case, the cliché is quite accurate. He delivers one of his finest and most effective performances here, the most dialed back and restrained he's ever been. He brings surprising nuance and depth to his role as a father who desperately fights to preserve his last moments with his daughter, who suffers considerable agony at his inability to reverse or ameliorate Maggie's inevitable decline. Schwarzenegger's turn here also suggests his capability for a wider range of roles as he approaches his seventies and is less able to take on the physical demands of the action hero roles that he has been known for.

Abigail Breslin is also fine as the titular afflicted girl. As her disease overwhelms her - rotting limbs, spiderweb veins, cloudy eyes, an increasing hunger for flesh - she sensitively conveys the painful emotions of a young woman dealing with a terminal illness and approaching death.

While Maggie's genre combination of zombie flick and melodrama runs the risk of seeming unappealing to different audiences - not enough action for the midnight-movie crowd and too pulpy for the arthouse crowd - it nevertheless successfully puts a unique spin on familiar material, and represents an elegantly crafted example of yet another tale of the walking dead.

Maggie screens again at the Tribeca Film Festival on April 25, 9:30pm. For more information and to purchase tickets, visit the festival's website. Maggie opens in theaters and VOD on May 8.

Do you feel this content is inappropriate or infringes upon your rights? Click here to report it, or see our DMCA policy.
Abigail BreslinArnold SchwarzeneggerHenry HobsonMaggieTribeca 2015