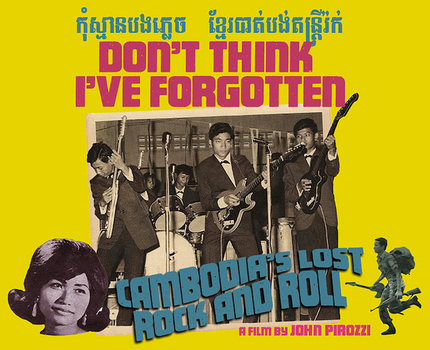 If you are a hipster who picked up a copy of Cambodian Rocks Vol.II in the World Music section at your favorite vinyl shop then you might already be familiar with musicians like Sinn Sisamouth, Pan Ron and Yol Aularong. But did you know that these musicians all perished in forced labor camps along with an estimated 2 million others under the brutal Pol Pot regime? Don't Think I've Forgotten: Cambodia's Lost Rock And Roll isn't some cutesy, esoteric music documentary but a well researched, searing history lesson of Cambodia.

With mountains of archival footage and interviews, director John Pirozzi whose long list of credits include being a cameraman on countless documentaries and films on musicians, chronicles the history of the music scene in Cambodia. The result is an important, vivid reminder of the past and the music that reflected the era that was once almost erased and forgotten.

Cambodians saw their independence in 1953 after a long French colonial rule. Its very much revered, musically inclined leader Prince Norodom Sihanouk brought modernity and art to the country, making its capital, Phnom Penh, 'the Pearl of Southeast Asia'. Everybody flocked to the booming capital, including many musicians.

In Phnom Penh, the French and Afro-Cuban inspired music flourished. First made popular by Sinn Sisamouth, a svelt voiced, mild mannered singer who was regarded as 'the father of the soul of Cambodia'. Then there was Ros Serey Sothea, a country girl whose voice captured the hearts of the public. They recorded many songs together as the khmer music's royal couple. Another popular singer was Pan Ron, known for her versatility as she dabbled in a variety of genres as the music trend changed with the times.

As rock 'n' roll gained popularity in the West, Cambodian youth sought it out. It took off particularly after American GIs' radio stations on aircraft carriers off the coast of Indochina (a constant reminder of the Cold War brewing just across the border in Vietnam) filled the airwaves with Wilson Picket and the Shadows and Carlos Santana. Countless guitar bands started to pop up everywhere. Baksey Cham Krong was one of the first surf guitar bands who gained popularity. With their long hair and pants, they reflected the changing society.

Then things turn serious as Walter Cronkite and Dan Rather explain the intensifying situation on TV. As the Khmer Rouge gained ground in the northeast near the Vietnam border, Prince Norodom's neutral stance towards the Vietnam War abruptly ended with a military coup backed by the US. Incensed by the coup, the prince who had never been an ideologue, allied with communists, his former enemies. Pol Pot and Khmer Rouge used his popularity to their advantage among peasants, and their numbers swelled.

The indiscriminate bombing of rural Cambodia by the US didn't help the matter either. After the US decided to pull out their troops, Khmer Rouge entered Phnom Penh in 1975 to a flurry of welcoming civilians. Then everything stopped. Pol Pot's regime lasted only 4 years but its abominable legacy is still felt 35 years later. Pirozzi effectively uses countless mug shots of the disappeared during the time of Khmer Rouge. They are a searing reminder of the magnitude of this genocide.

Don't Think I've Forgotten, minding Cambodia's darkest history, contrasts the free spirited musicians and their lively music with the horrible fate that they suffered. The interviewed surviving musicians and artists solemnly recall how they lived through hell on earth, lying about their professions, as Khmer Rouge systematically exterminated anyone who had ties to the opulent, past culture.

10 years in the making, watching the film, you can feel the amount of passion and dedication that is poured into it. This documentary is not only a tribute to those musicians who perished but a celebration of music's resilient, lingering power in reminding us of the past.

Don't Think I've Forgotten will have an exclusive one week engagement at Film Forum here in New York. National roll out will follow. Please check the film's website for dates and more info. To celebrate the film's opening, City Winery will host two concerts featuring surviving musicians from the film, on Friday April 24 at 7:30pm and 10:30pm (Details here). The soundtrack for the film will be released via the specialty label Dust-to-Digital on 5/12.

Do you feel this content is inappropriate or infringes upon your rights? Click here to report it, or see our DMCA policy.
cambodiaDon't Think I've Forgotten: Cambodia's Lost Rock 'n' RollJohn Pirozzimusic documentaryPan RonSinn SisamouthYol Aularong