Review: ADULT BEGINNERS, An Excellent Cast In A Movie That's Not 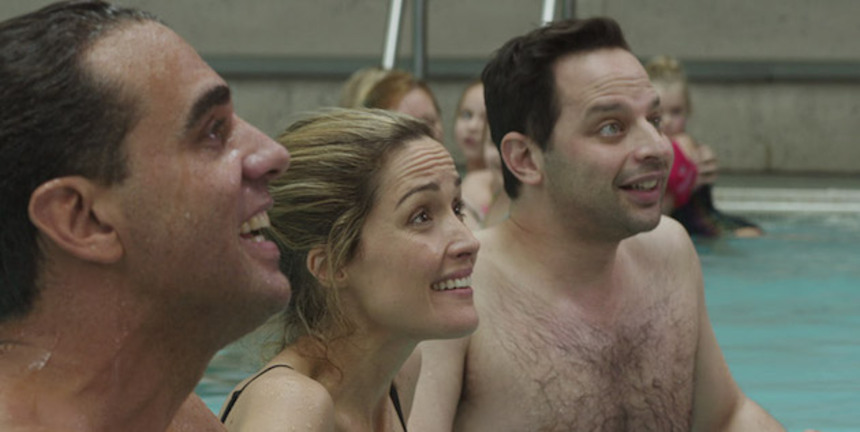 One thing I know for sure: Adult Beginners is not a good movie.

A formidable new tribe of comedians in an R-rated movie, so this movie should be filled with filth and fun, right? Nope. It's one of the most unfunny, forgettable movies with a large ensemble of comedians ever made.

Kroll stars as Jake, a guy who invented glasses similar to Google glasses. Life is good and he's throwing a big-ass party to celebrate the launch of the release of this new product. During said party -- filled with all the babes and cocaine a rich, arrogant prick wants -- he gets a call that there's a part missing at the manufacturing company and the glasses won't be made. So ... everyone leaves the party and immediately hates him. He loses his job and all his friends. (Note: If all my friends ditch me because of something bad I didn't see coming at my place of work, shoot them.)

Instead of working out the issue, Jake ends up having to live with his sister Justine (Byrne) and brother-in-law Danny (Cannavale), a married couple with zero chemistry on screen (which is ironic because they are a couple in real life). They let him stay until he gets back on his feet -- Jake, creator of a game-changing product, apparently never heard of a savings account when he was making a shit ton of money -- but he has to babysit their son in exchange. Blah blah blah, life lessons are learned and the movie ends, eventually. I've seen it twice and it's so mundane I can't remember the ending.

The movie chugs along and both Jake and the audience forget the purpose of the story: His entire career was just ruined and he needs to start over; an adult beginning at life again. But that never happens. Jake doesn't seems depressed and doesn't try to get his job back or even find a job. He just overstays his welcome with his sister, and with the audience.

This colossal problem with the movie is that it forgot to be something very important: funny. I counted (twice) and there are zero laughs. Humor is easy to pick up on when a punchline is brilliant, because you know, you're laughing. If I missed one, chances are most of you will, too. With so many comedians present, it was an unpleasant surprise -- and kind of depressing -- watching them not only not do what they do best on screen, but meander (in character) just as much as the story does. Everyone looks bored.

I think what director Ross Katz, a two-time Academy Award-nominated producer, was going for was the heartfelt approach, i.e., an endearing story about starting over. But Jake doesn't make any attempt to rebuild his life. It could possibly be about being a better uncle, but there's no sign of love there -- just him biding his time and doing nothing.

Adult Beginners has a lot of missteps and it doesn't seem to know where it's going. For me, it's going in the "never watching again" pile. This film is one of the major letdowns of the year, and it's only April.

The film opens in select theaters in the U.S. on Friday, April 24. It will also be available to watch via various Video On Demand platforms.