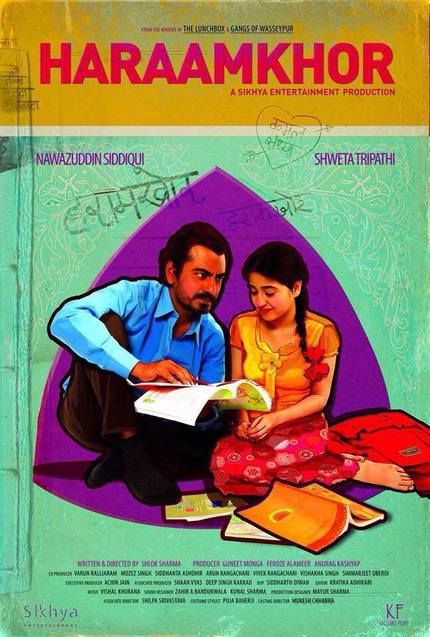 Does love make monsters of men? Or, as Shlok Sharma's debut feature Haraamkhor suggests, does the idea of love merely magnify the monstrous tendencies latent within men?
This is one of many complex ideas that weave through Sharma's film, but it is probably the one that will fill the thoughts of viewers as they leave the cinema. Haraamkhor is not an easy story to tell, and there are times where the methods of storytelling and the tonal shifts appear incongruous with the core story. However, when viewed as a whole, rather than the sum of its seemingly disparate parts, Haraamkhor works quite well in communicating opposing truths about the nature of love and what it does to people.

Haraamkhor (The Wretched) is the story of Shyam, a rural school teacher, and his student Sandhya, a 15 year old with a school girl crush. When Sandhya's affections become serious, Shyam takes advantage, and their relationship is off to the races. To complicate matters, Shyam is already married to Sunita, another former student, and Sunita quickly grasps the nature of their relationship, even before Shyam. This is only one of many conflicts embodied by Shyam and his masterful ability to manipulate those around him while simultaneously remaining largely unaware of his own malicious effect on his surroundings.

Haraamkhor is also the story of Kamal, a young boy nursing an infatuation with Sandhya, who is determined to win her love any way he can. Sandhya, on the other hand, has no interest in Kamal, and spends most of the film either ignoring or berating him, neither of which have any effect on his affections. Kamal's feelings toward Sandhya can best be described as the first inklings of puppy love. He knows that he can't live without her, but since he's even younger than she is, he'd probably not know what to do with her if he ever got her.
Sandhya's tunnel vision for Shyam and the desire for a real adult relationship, though she's likely never known any kind of relationship, tells her that Kamal is just a kid, even though he's only three years young than she is. However, it is only Kamal who sees Sandhya for who she really is, an innocent corrupted by a manipulative authority figure.

These two love stories that converge on Sandhya are completely different in execution and tone. The Shyam story is treated seriously, as this is the way that Sandhya sees the relationship. The story of Kamal, and his best friend and biggest cheerleader Mintu, gives off more of a rompy vibe, with goofball music cues and wacky adventures to match. For the first hour or so, I was having a hard time reconciling what seemed like two different films that shared characters, but soon it becomes clear to the careful viewer that the tonal shifts are intentional, and even necessary to tell the stories at Haraamkhor's heart.

Shyam, the manipulative schoolteacher, is played by Nawazuddin Siddiqui, who is not only India's greatest working actor, but also one of its most prolific. It's more rare these days to see an independent Hindi film without Nawaz than it is with him. Siddiqui greatest talent is for playing characters who walk a fine line between passion and madness, and often his characters step on both sides of that line during his films.
Shyam's greatest achievement as a character, and Nawaz's greatest achievement in his portrayal, is that the viewer is never quite sure whether to pity him for his weak grasp on ethics or loathe him for his obviously manipulative nature. This character could easily have been a one-note villain, but Siddiqui's performance breathes life into that role, not unlike his performance as the ghostly villain in Suparn Verma's recent Aatma.

Siddiqui is not alone in the film, though, as he is surrounded by a surprisingly talented group of cinema newcomers, led by Shweta Tripathi as Sandhya. Each of these young performers brings nuance to their roles that belie their years, but especially the performances of Irfan Khan as Kamal and Mohd Samad as his best friend Mintu. These two young men are both completely real in their portrayals of these boys on the verge of adolescence and incredibly able to beam pure emotion through the schoolboy giggles. Where Sharma came up with these performers, I don't know, but he's done a wonderful job in casting.

Haraamkhor is not a film for everyone. I can imagine the tonal shifts and often wildly different styles clashing will alienate some viewers, but the rewards for the remaining ones will be great. Shlok Sharma has done a wonderful job creating a film that is entertaining without being exploitative, thought-provoking without being preachy, and explosive without blowing up in his face.
The final scenes distill the film's tonal dissonance into a single pure idea that manages to feel completely true and yet just as schizophrenic as its hormonal characters' worldview. Look out for Sharma; with a debut like this, he's going to be one to beat in the coming years.
Tweet Post Submit