Review: THE SALT OF THE EARTH, Documenting A Visionary Photographer 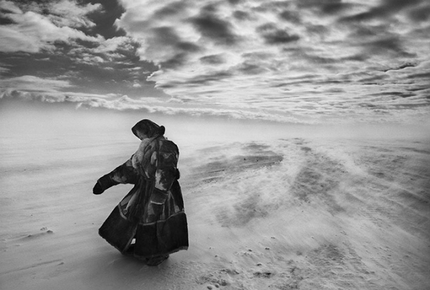 There are a few titans of narrative cinema - Martin Scorsese and Spike Lee come first to mind - who make documentaries that rival their feature film work. Another example is Werner Herzog, a filmmaker whose non-fiction films are still celebrated, but it's his docs that (deservedly, in my opinion) get the lion's share of praise.

From the same school of filmmakers as the iconoclastic Herzog, Wim Wenders shares his compatriot's ability to seamlessly switch between doc and feature. If the only non-fiction film Wenders ever shot was Buena Vista Social Club, than he'd be rightly lauded as one of the best non-fiction directors of the last half century.

In The Salt of the Earth, Wenders, along with his co-director (and son of the subject) Juliano Ribeiro Salgado, has done a remarkable job in bringing the art of still photography alive in the context of a film. Tracing the career and passions of Brazilian-born, Paris-based Sebastiao Salgado, Wenders brings the viewer into these images in a quite literal way.

Employing a kind of scrim, he shoots the subject looking at his own image - change the reflection on the angled mirror, and the subjects face literally emerges from his own art. It's a play on Errol Morris' "Interotron" technique, and it's just as effective here, as we see the eyes of Salgado scan the given image, seeking out the stories contained within.

As a journey through a career, it's a fairly straightforward tale, at least as far as a tale of such a wild adventurer can be straightforward. Through multilingual narration, we learn about how this professional economist gave up his career (with the support of his dedicated wife) in order to spend years upon years searching the corners of the world for stories to tell.

If there's fault to be found, its that the doc doesn't do much to actually provide the nuts-and-bolts of Salgado's methods. Sure, it's clever when Wenders talks of this being his first subject "that shoots back," but I found myself wanting to know just how Salgado survived for six years in the Amazon basin, how the change from film to digital affected his work, how negatives were kept fresh in trying conditions.

Instead, we're given almost poetic praise by Wenders, a person who clearly idolizes his subject and finds no fault to speak of when discussing the abandonment of his wife and child to pursue this lifestyle. Co-director Ribeiro Salgado's brief contributions give a little sense that life wasn't always rosy, sans father figure, but, in adulthood, he too seems swept up in his dad's projects.

The film employs numerous shots from other documentaries, many of which contain some stunning imagery, so there's a slight danger of viewers ascribing some of these astonishing scenes to Wenders' well-honed craft. Still, it's clear that the film has Wenders' stamp clearly on it, the framing device that he contributes through the interviews with the artist the true heart of the film.

A visually stunning project, I look forward to another viewing, as jumping back and forth to read subtitles distracted me from lingering on the images themselves. This is a fault of my own dwindling capacity for French comprehension, and isn't really any fault of the film's.

As a celebration of the photographic art of one remarkable contributor, The Salt of the Earth is unparallelled. As a definitive examination of Salgado's life and work, it remains a bit superficial. I'd have liked a bit more spice added to the mix, a sprinkling of the pragmatic to add to the effusive praise. Ultimately, there's much to admire about the film, and it further solidifies Wenders' own non-fiction legacy considerably..

Review originally published during the Cannes Film Festival in May 2014. The film opens in select theaters in New York and Los Angeles on Friday, March 27, before expanding nationwide in the following weeks.

Do you feel this content is inappropriate or infringes upon your rights? Click here to report it, or see our DMCA policy.
documentaryJuliano Ribeiro SalgadoWim Wenders

More about The Salt of the Earth