Review: IT FOLLOWS, A Pure Thriller 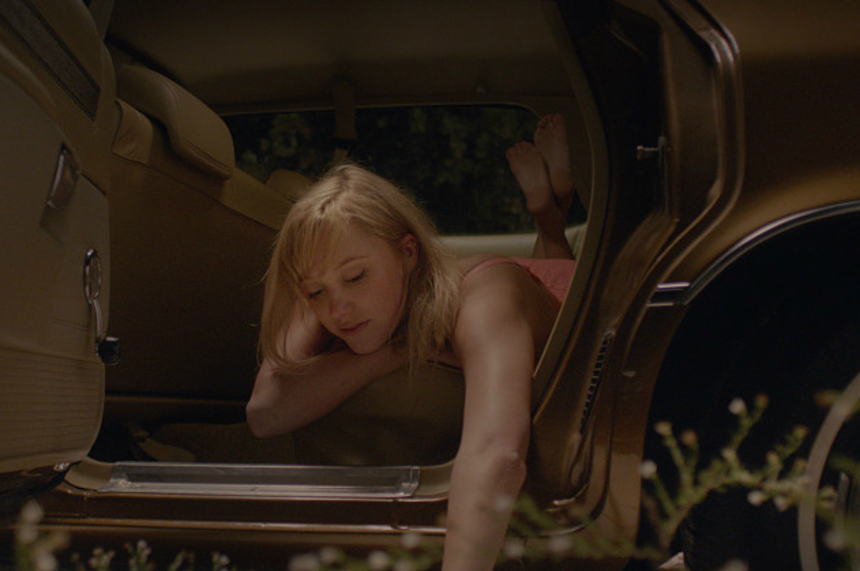 With a terrific cold opening, a somber and effective mood, strong performances and assured direction, there's lots to love about It Follows. It's a kind of pure thriller, with a few shocks mixed into what's a remarkably consistent vision that makes for a quite powerful experience.

The concept is beautifully simple, but its one of the pleasures of the film to find out just what's going on after the shocking opening sequence. Without being too vague, suffice it to say this is one of the more macabre games of tag in any genre film, with the added benefit of providing one of the more problematic of sexually transmitted concerns.

There's no specific genre category that the film falls into, other than the slow-moving trope popularized by George Romero and his incessant hordes ("not zombies!" as he often declares). The film's at its best when it distills this concept -- the slow moving figure staring blankly into the camera, looming ever closer -- into a very precise and effective element of the film, avoiding for the most part ever having the escalating danger feel repetitive or too predictable.

Also to the film's credit, director David Robert Mitchell and his ensemble cast never wink at their audience. This is certainly straight faced, but it's never dull or ordinary, lensed in a way that makes sense for the setting, with shots composed rather than using the silly crutch of nausea-cam.

Maika Monroe (Labor Day) is particularly striking in the lead, and the rest of her compatriots serve the story well, forming a kind of Goonies-like clique with some quite provocative twists. It's a post-adolescent group, but they bond in a very high school way, yet the relationships never feel sophomoric. It's clearly a script that spent as much time working on drawing rich characters as it did on finding moments to scare an audience, and it's very much appreciated.

There were a few moments towards the end where it lost me. Still, it's always a pleasure when a film can be both spooky and worthy of exegetical discourse after the lights have gone up.

These are quibbles, and save for the gore-whores, I think that this film will work for even the most jaded of spooky-movie lovers. It's not quite a triumph like Oculus, but it's a work that manages to be both old school and very fresh, a wonderfully restrained film that still packs quite a punch.

One thing for certain - it follows that after It Follows I'll be following David Robert Mitchell in his future cinematic journeys, and hope they can be at least as gratifying as this gem of a flick.

Review originally published in slightly different form during the Cannes Film Festival in May 2014. The film opens in select theaters in the U.S. on Friday, March 13, and will also be available to watch on various Video On Demand platforms.

Do you feel this content is inappropriate or infringes upon your rights? Click here to report it, or see our DMCA policy.
David Robert MitchellHorrorMaike MonroeBailey SpryCarollette PhillipsLoren BassKeir GilchristMystery