FICUNAM 2015 Review: The Ritual of Emasculation In Genre-Bender I STAY WITH YOU 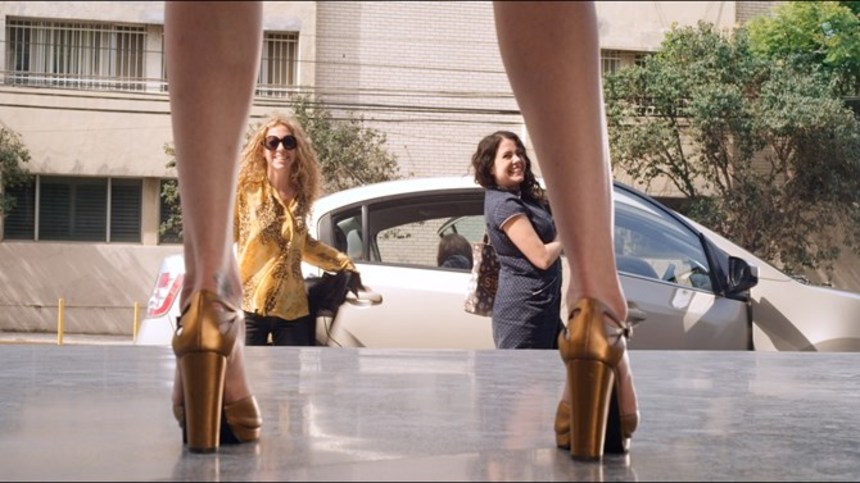 Excessive, mindless and often weird violence is being carried out by testosterone fueled male hands.

Or at least, that´s the stereotype usually assigned to XY chromosome wielding part of mankind, while women are deemed the gentler sex in every aspect. Meir Zarchi's cult classic of the rape-revenge genre I Spit on Your Grave, reverses the notion but only after physical and psychological humiliation, and victimization of the main protagonist. Recently, Matsumoto Hitoshi brought an army of whip-cracking, teeth-kicking and spit-jetting dominatrixes in the head-twisting comedy R100. A self-taught filmmaker from Mexico, Artemio Narro, catches the theme from the other side in his feature debut I Stay With You (Me Quedo Contigo).
Spaniard Natalia (Beatriz Arjona) flies to Mexico City to meet her boyfriend Esteban. Soon after her arrival he must leave the city because of work and Natalia finds herself stranded with her friend Ana (Anajosé Aldrete Echevarria), who suggests some quality girl time. They meet Sofia (Flor Eduarda Gurrola) and bossy Valeria (Ximena Gonzalez-Rubio) and proceed to the dance club, where they drown into the loud bass-centric music.

A change in the ladies' night out emerges as the gang bursts into a low class pub. Not much fun happens in the locale full of drinking and not so attractive guys. Natalia ogles a cowboy in white (Iván Arana). Soon she is making out with him in a car. At the crucial moment of pants falling down, her femme trio pops in, interrupting Natalia´s primary lustful desire.
Quite surprisingly, and lacking any motivation, the gang kidnaps the cowboy and drags him to Valeria´s house. As the guy gets more suspicious, his aggressiveness and verbal abuse rises proportionately, a behavior earning him an unpleasant tying up. The initial genre anchorage starts to slowly alter from bachelorette party comedy into something more sinister, though the binding element of girls gone wild persists.
At this point, I Stay With You switches into observational mode, zoomed in on the drunk foursome possessing the ultimate power over the cowboy´s body, now tied up to a dancing pole. Narro stands aside watching, most of the time framing all the culprits at once and waiting as one taboo is broken after another in a male rape fantasy gone horribly wrong. The guy is gradually robbed of any dignity and where there is no dignity, physical abuse starts. The first phase of male-shaming starts after feeding him a pill against splitting headache which turns out to be the nothing else than the magic blue pill. The director ensures the following scenes to be as humiliating as possible.
The senseless tormenting takes over the narrative in a rather plotless manner as the viewers wonders where the whole affair is leading. Narro drops the cowboy into the scenario not providing any background details except as a vague sketch of a sexist macho man, which means he gets zero empathy from the audience.

The same goes for the oppressive gang of vivacious chickas. The detachment from all the characters then leaves viewers on a neutral ground, witnessing a sort of freak psychological trial as infamous as say The Milgram Experiment or The Stanford Prison Experiment.
In some sense, the film is supposed to reflect violence in Mexico. This discussion works far better though in Amat Escalante's painfully palpable and memorable illustrated Heli. Apart from the geo-social framing, Artemio Narro crosses the entertainment jurisdiction of torture porn and opens a discussion on primal nature. A convincing psychological portrait of the unstable mother, capable of mutilation, has already been provided by Lars von Trier in Antichrist. Narro dissects this theme in a much broader sense.
As Natalia gets cold feet during the emasculation play, her friend assures her there is nothing to be worried about since Natalia's father is a rich and influential man. The introduction of such affluence suggests that money can buy anything; that Narro wants to suggest that no legal or other consequences will be drawn after the night is over. The latter fits more into the concept of the film pushing the characters to the edge by stipulating that they will not be harmed, as in dreams or videogames, IE acts performed upon the victim don´t have consequences stigmatizing the perpetrators.
I Stay With You is not the usual battle of the sexes, rather it is the battling of one sex. The film's mode of observational drama fixed more on the circumstances of the ceremony invoking the dark side in the female psyche rather than the acts themselves, avoids the usual tropes of exploitation and offers a steady gaze at the ritual of emasculation.

Narro leaves enough blank spaces and surrealist touches for the audience to complete the scenario in a number of ways. At some point, a man with a horse head plays in a pool in the background. This is strange and at the same time comical, insignificant enough to not compromise the concept and visible enough to suggest the director's darker sense of humour.
Tweet Post Submit

Do you feel this content is inappropriate or infringes upon your rights? Click here to report it, or see our DMCA policy.
Artemio NarroDramaI Stay With YouMexicoViolence