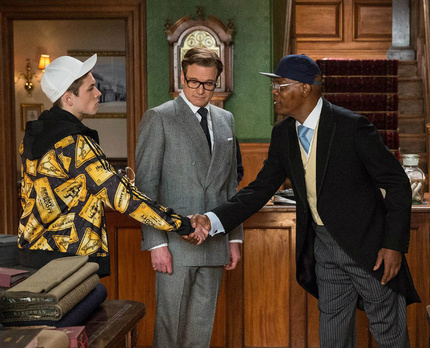 The world of espionage has become a bit dour of late. Our postmodern proclivities have caught up with us, and thanks to our impossible missions, our Bourne fascinations and a Daniel Craig-ified Bond, we've lost a little bit of the silly when it comes to our secret service cinema.

Leave it to Matthew Vaughn, then, to shake and/or stir a wee bit of self-aware fun into the mix. Remember, before he took the mutants to school or kicked some ass with avenging heroes, he baked a Layer Cake that introduced much of the world to that Craig guy mentioned earlier. The chops are there, it seems, so does it all pay off?

Well, sure. Kingsman: The Secret Service is a film that hides nothing about its intentions, practically underlining each and every overt reference it makes to the Bond-like films of yore. Self-aware shtick can be tiresome pretty quick, but the film is done with such exuberance and verve that its almost adolescent fascination with being "clever" rarely gets in the way.

No one will confuse the film for treading on new ground, yet there remains a certain kind of freshness wrapped within the retro package. It's helped tremendously with some tip-top performances by the likes of Colin Firth, Michael Caine and Mark Strong. Even Mark Hamill makes a brief appearance for good measure, a slightly-more-than-a-cameo piece that provided a bit of a buzz for the crowd I saw it with.

Relative newcomer Taron Egerton takes on the heroic journey with aplomb, making the Pygmalion transmogrification quite believable. Sofia Boutella makes for a crazy kind of assassin, Sophie Cookson plays a Roxy with moxie, while Samuel L. Jackson provides a mix between Jay Z, Idi Amin and Steve Jobs , with all the bombast required for any decent spy villain.

The film plays not only with spy tropes but also with many of the common plot attributes of the latest slew of Young Adult Novel (YAN™?) adaptations. The training sequences wouldn't be out of place on the set of Divergent, The Hunger Games or even (gasp) Ender's Game, yet the puzzle plays work within the broader context of the narrative.

There are guns and bombs and planes and conspiracies and more, all pretty much what you'd want from such a fun ride. It's when things take a turn for the truly dark or truly silly that the film really starts to engage, the splats of exploding heads or bouts of mega-violence more Super than Kick-Ass, all to the film's credit.

What could be its most tedious element is actually its strongest - the film knows what it is, we know what we want it to be, and it all gets delivered. Yes, it's kind of like fast food, that you're getting something highly packaged. But you're also getting, of course, something almost implausibly satisfying, sating a certain appetite that you didn't know needed scratching. No one is going to confuse this as fine dining, for certain, but it certainly tastes pretty yummy.

To stretch the metaphor further, the secret sauce for Kingsman: The Secret Service may be just common ingredients, but it's still makes for quite a treat. With gadgets, glitter and guns, we get what we want from a silly spy film, all with the satisfaction of having a decent story, strong performances, and an unflinching capacity to take this as over-the-top as required. What's clear is that Vaughn and company are having fun chewing on this meal, and we in turn as an audience can revel in a film that takes not taking itself too seriously very seriously indeed.

Review originally published in January 2015, in connection with its world premiere. The film opens wide in theaters throughout the U.S. on Friday, February 13. Visit the official site for more information.

More about Kingsman: The Secret Service