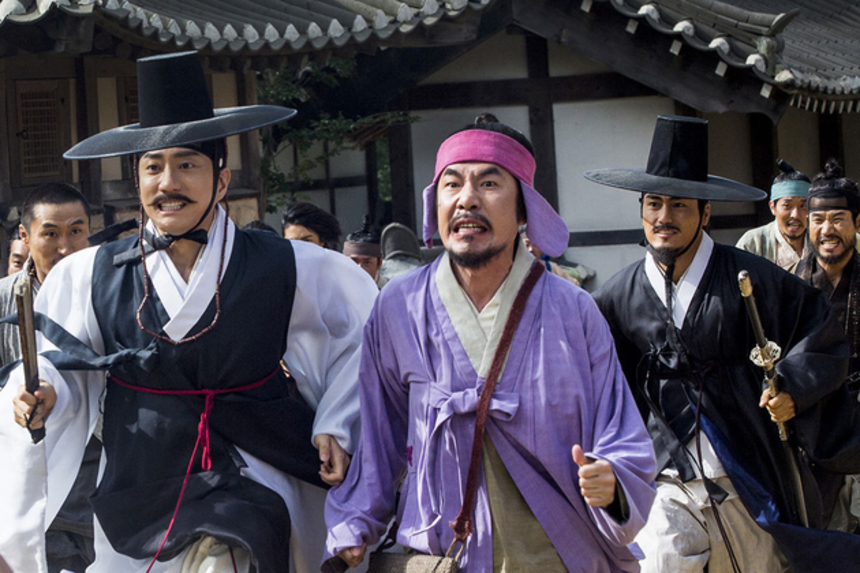 Detective Kim is back with his trusty sidekick Seo-pil in the follow up to 2011's hit period action-comedy Detective K: Secret Of The Virtuous Widow. A hodgepodge of genres delivered at breakneck speed, this new instalment, subtitled Secret of the Lost Island, comes on the heels of a raft of period successes, and will again open during the busy Lunar New Year period.

In 1795, the Joseon dynasty's economy is under threat when a large amount of fake silver is slipped into circulation. Detective Kim investigates the case while at the same time a young girl seeks his help, having lost her sibling. Things take a darker turn when corpses of girls are discovered, apparently linked to the counterfeiting.

Kim Sok-yoon is back at the helm, as are stars Kim Myung-min and Oh Dal-su, in a sequel that carries over the energy of the original as well as its pacing problems and hit-and-miss gags and set pieces. The dynamic between the leads remains strong but the rest of the characters, not to mention a few plot points, also feel a little too familiar to easily differentiate both works. The biggest change is probably the improvement in production values as the interceding years have seen Korea's technical prowess continue to improve rapidly.

Given the original's success, a year and a half before Masquerade (2012) ushered in the current popularity of the genre, this new episode should have little trouble finding an audience, though a couple of factors could work for or against it. The Pirates, one of last year's most successful films, had a very similar vibe and spectators may either be eager for more of the same or tired of it. Also a factor may be the presence of Oh Dal-su. Kim Myung-min may be the star as the quick-witted and cocksure yet bumbling Detective, but Oh once again steals the show as his long-suffering companion with his effortless knack for comedy, particularly when it comes to self-deprecation.

Oh recently became the first Korean actor to accumulate over 100 million tickets sales through his filmography, and his most recent hit Ode To My Father, in which he co-stars, is still in theaters on its way to the all-time number two spot. He also co-starred in recent blockbusters The Attorney (2013), Miracle in Cell No. 7 (2013) and The Thieves (2012). It'll be interesting to see if his larger part here compared to those previous works can translate into increased ticket sales.

As for the lead, Kim has little trouble with his rapid-fire dialogue but again lacks the easy charisma that could really make a character like his click. Joining the pair is Lee Yeon-hee, yet despite her charming turns in A Millionaire's First Love (2006) and Hello Schoolgirl (2008), she serves as little more than eye candy here.

Behind the camera, director Kim keeps the action and gags flying thick and fast, but the film's pacing is tiring and belies a lack of confidence in its characters as it hastily moves from one scene to the next. As with other period fare these days, lensing and production design are top notch while effects are generally good, though the green screen work draws too much attention to itself at times. Also impressive are the costumes, but like last year's The Huntresses and The Pirates, the showy designs dispense entirely with authenticity.

While the strength and weaknesses mentioned above fall in line with the original, the new Detective K runs into more trouble with its extreme tonal shifts. The abrupt swings between comedy and action are one thing, but when the film abandons its frothy tone for dark scenes involving the enslavement and death of young girls, the change proves particularly jarring.

Given its by-the-numbers direction, inconsistent plotting and unremarkable performances (save for Oh) Detective K: Secret Of The Lost Island continues Korea's spotty track record in the period action-comedy subgenre.