Destroy All Monsters: Us, Them, And The Oscars 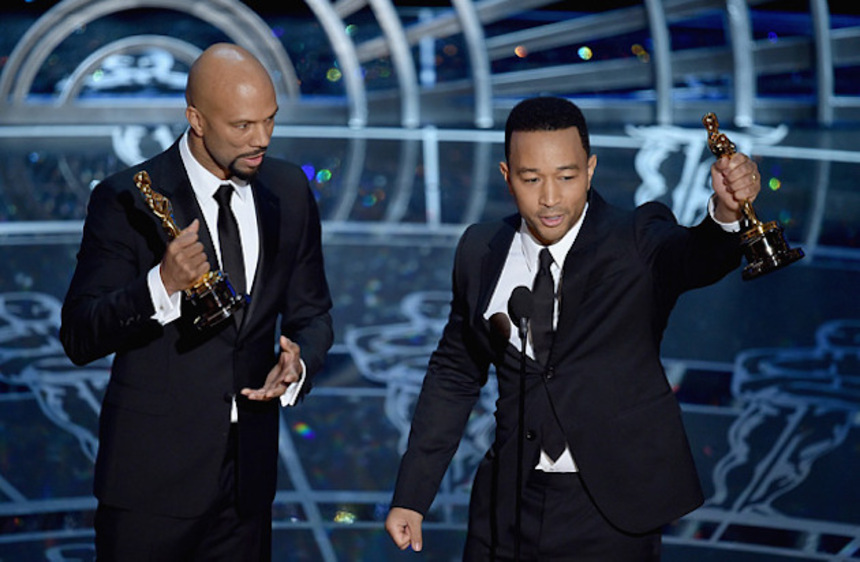 Hollywood's annual pageant of nice dresses and the complex madness of John Travolta went off pretty much as expected - a few less for American Sniper than perhaps I cynically expected, and a few more for Birdman, which ain't Boyhood, but is an off-model enough Best Picture that I can't complain, really. The Birdman/Iñárritu win also makes this the second year in a row that a Mexican-American filmmaker has taken the top directing prize for the American film industry.

Naturally, terminally pissed-off Sean Penn punctured the moment with a xenophobic joke, because that's what people like Sean Penn apparently exist to do, with little modulation: they're there to demonstrate categorically that the producers of the Oscar show can slalom and limbo all they want in a vain attempt to show otherwise, but there will forever be the white hot core of America - and as far as they're concerned, there's Us, and there's Them, and Them ain't wanted.

As such, the evening unfolded as a well-performed pantomime of an industry aware of its own issues ("best and whitest!" Neil Patrick Harris crowed, right off the top) that nonetheless seems hog-tied about any particular effort to do anything about them.

Or even, it turned out, do anything besides continue to subtly reinforce the dynamic. With name-pronunciation gags leveled at Chiwetel Ejiofor, David Oyelowo, and a loop-back shot at the Idina Menzel nonsense from last year, even the jokes were on model: there's White American Normal, and then there's How The Hell Do You Say That, Anyway?

It's all well and good for the whole crowd to gather to their feet to applaud Selma's single award win of the evening - or for a single person to do so, in the case of Meryl Streep's enthusiastic support of Patricia Arquette's stump speech about wage equality in America.

But none of it is going to amount to any manifest change in what sorts of movies are conceived, made, and marketed - or perhaps, more on Selma's point, which movies earn the ten-million-dollar Oscar campaign investment, which is now apparently the only way to procure one of those big golden doorknockers. Things will continue exactly as they have been right up until the moment Selma and perhaps twelve other movies exactly like it earn Captain America grosses. Then, maybe, the representation percentages will shift.

That's the danger of an Oscar ceremony or things like them; they're an opportunity for the pantheon to wax philosophical in front of a large captive audience (that's us, by the way, not their peers) about the values they'd like to believe their industry should be supporting. Then everyone (us included) gets to walk away feeling a little lighter for the unloading of concerns, without having to wake up the next day to do anything about it. Go-nowhere advocacy at its finest.

The richest duel of the evening came spaced about an hour apart. First up was an exploding piñata of white people belting out "Everything Is Awesome" from The LEGO Movie, that grand paean to obeisance and the glories of being on the winning team.

Then, a while later, the only moment of significant contextual weight and performative power of the whole evening, as Common and John Legend and a rickety remake of the Edmund Pettus Bridge stood up to sing "Glory" from Selma, moving even Captain Kirk to tears and bringing the house to its feet. The number should have been retitled "Everything Is NOT Awesome, And You Know It."

It was a face-off of consolation prizes: the song from the animated movie left out of the Best Animated Feature category, vs. the song from the live action movie criminally under-represented in every other category. "Glory" won, as well it should have.

In the most sublimely trivial of formats, some of the Oscar winners this year also managed to crack one of the award ceremony's greatest standing strictures: Pawel Pawlikowski twigged to the fact that if you simply refuse to heed the play-off music, it's not like a tactical response team is going to swarm the stage, take back your Oscar, and cart you off to prison. At the end of the day, the Oscars can be a very polite ceremony. So when in doubt, and those lazy strings start a' swellin', just... keep talking.

It breaks the core hegemony of the show, which is that (quite badly, in this year's case) it is always racing headlong towards its own best-case end-time. We all watch, perceiving there to be some master seamstress behind the scenes who is nipping and tucking the Oscars' infinite cloth in an attempt to land a perfectly-fitted sequined dress on the 11:59 p.m. stop, perfectly every time.

(Why the seamstress, noticing her dress is ballooning in the middle, doesn't cut the Lady Gaga number will forever be a puzzler to people like me.)

But this effort is built on the single inviolable rule of the Oscars, which is that the producers are going to allow the recipients onstage to collect their awards, but only for so long. Last night, in the smallest possible way, a few people proved just how limited that scope of control actually is.

Next year, if these peoples' convictions are quite what they claim they are, perhaps we'll see some of them use the ultimate Oscar panic button to do a little good. Maybe the next time a song as resolutely uplifting as "Glory" gets sung on an Oscar stage in the context in which it found itself - a standard-bearer for a movie whose importance in the year in which it was released cannot be understated - the army of like-minded supporters might consider just singing on, and on, and on, till the producers have to kill all the mics, cut to commercial, send in the relief pitchers, storm the Bastille, and burn the building down. The only thing AMPAS can't, with its most lucrative bauble, afford to lose is time; its second most valuable commodity is face.

Set those two on a collision course, and who knows? We might get another Oscar ceremony our kids will be talking about in 40 years, instead of yet another iteration of the show we'll all have forgotten by the time this column drops.