Ava DuVernay's Selma packs a powerful punch, yet its impact is delivered with such finesse and grace that it might seem at first less impressive than it really is, its affects felt much later after you walk away from the theatre.

The film reenacts the events of 1965 involving a series of marches and protests surrounding the voting rights in the Southern U.S. The story focusses on the likes of Martin Luther King Jr., Hosea Williams, James Bevel, John Lewis and many others, men and women who would become forever remembered for their pivotal role in the American civil rights movement. Facing cultural practices that had reigned for hundreds of years, these individuals stood in front of the line, staring straight into the faces of those that would do them all harm to bring about something as ineffable yet fundamental as the notion of "justice".

With statuary in Washington, streets named throughout the world and a day in the U.S. to celebrate him, the actions of Dr. King can sometimes feel less like those of a provocative and complex human being and more those of an icon. It's easy to forget how young he was (during these events he was only 36), and how he helped lead and engage a coalition of activists and preachers who did not always see eye-to-eye with his admonition about non-violence.

Yet Selma is more than just "the Martin Luther King" movie, and it's all the better for it. Paul Webb's script does a commendable job at making the specific stand in for the general, focusing on the minutia of tiny moments to stand in for the whole of this Nation-wide struggle. The early scene where King is fumbling with his ascot is a delightful one, showing an ease with his wife Coretta while the pomp of a Nobel awards ceremony awaits.

It's this collision between the larger circumstances and the more individual, how a man who could speak eloquently to power (including to the president of the United States) could still be swayed, or at least give proper shrift, to those local activists with whom he would collaborate with.

King's life was complex, particularly regarding his relationship with those who opposed him (including Malcolm X) and those he was closest two (including his wife). Some of these challenges are addressed obliquely, leaving some of the more salacious allegations there to be picked up but not dwelled upon. 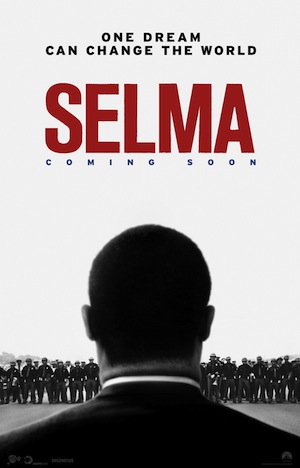 At its best, the film has the comradery and looseness normally found in war or gangster films. It's those best moments where a group comes together against a common foe that set things apart, like when they make the sauce in The Godfather, or a cigarette is shared in Paths of Glory. It's this sense of the small moments of humanity against a backdrop of larger events that gives the audience entrance into the story.

I was astonished at the closing credits to learn that the film was shot at the very same location where the march occurred. The same Edmund Pettus Bridge serves as a key backdrop, the waters of the Alabama river still flowing beneath its arch. The events that would be known as "Bloody Sunday" took place there, and DuVernay manages to capture these moments with a keen director's eye.

The performances she elicits from her ensemble are perhaps the most laudable element of the whole. An entire troupe of Brit actors fill out the mainstay roles, from Tom Wilkinson as an irascible President Lyndon B. Johnson, Tim Roth as a phlegmatic George Wallace, Governor of Alabama, and Carmen Ejogo playing a hard-nosed yet sympathetic Coretta Scott King. Yet it's David Oyelowo's Martin Luther King that is the film's towering performance, a beautifully nuanced portrayal that provides the moments of histrionic showmanship and cool deliberation. It's one of the performances of the year, and not to be missed.

The American cast is also exemplary, including personal fave Wendell Pierce giving yet another engaging take, here as Hosea Williams. Lorraine Toussaint does a terrific job playing Amerlia Boynton Robinson, while Lonnie Rashid Lynn, Jr. (aka Common) serves double duty, rhyming atop the John Legend track at the close, and bringing James Bevel's tale to life. New Orleans-born Ledisi plays a brief scene as Mahalia Jackson and it's one of the film's true highlights.

As it plays out, the film feels somewhat familiar, as if it's simply rolling out as most historical dramas do with the proper levels of attenuation. Yet I found myself after the screening remembering the small moments that Webb and DuVernay inject in the film, aspects that make this far more than just another awards-worthy flick.

Unlike other well-meaning recent dramas supported by Oprah Winfrey, such as The Butler, or even the mishandled adaptation of the fantastic novel Beloved, Selma manages to get a near perfect blend of story drama, historical interest and rich and powerful performances. The film may not be quite the landmark that another Brad Pitt-produced film, 12 Years A Slave, was last year, but this Selma's ambitions are different.

In many ways, despite the violence at the core of the tale, this is a story of people, of individuals that made small decisions that had massive impact. It's illuminating if only to remind once again that even the largest of political change can be accomplished when a small few stand up for what is right. This is a message never hammered out as polemic, but merely confidently and beautifully rendered through a series of powerful scenes and memorable performances.

Selma's a terrific film deserving of the plaudits it's sure to receive, but it some ways it's perhaps even better than some of its superficial elements may suggest. It showcases DuVernay's capacity to tell a complex tale in an economic way, and provides audiences for generations to come a small insight into what these people did for the greater good of their community and their nation.