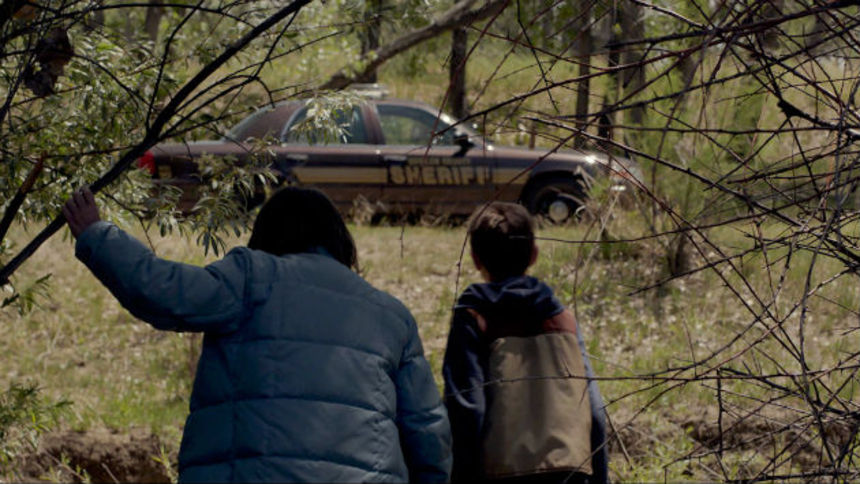 Sometimes a film's premise just sells itself. Two mischievous boys stumble upon an abandoned cop car and decide to take it for a joyride. It turns out the cop car belongs to an officer on the wrong side of the law who will stop at nothing to retrieve his cruiser and protect the secrets inside. Now get this, the cop is played by Kevin Bacon. Sold!

It brings great pleasure to report that Jon Watts' simply named Cop Car delivers on the premise in spades. With two fantastic performances by young boys Hays Wellford and James Freedson-Jackson, a strong supporting turn by Shea Whigham, and every bit of awesomeness you could hope for from a mustachioed Kevin Bacon, Cop Car is destined for video rental glory.

Aside from just being awesome, Cop Car succeeds to a large extent on its evocation of nostalgia. Long summer days of youth, the desire to escape the doldrums of childhood, and that sense of imaginary adventure are all called upon with wistful glory. One early scene finds the boys passing the time by conjuring up and reciting as many cuss words as they can. Boys will by boys.

But there is another nostalgia at work here as well, one for the films of a certain generation's youth: the Amblin adventures; the films that are fun for fun's sake. There is an escapism at play that doesn't take itself too seriously, yet deals with stakes that feel very real for the kids. If Cop Car was released in the VHS era, it would be dubbed and traded amongst friends until the tape was worn completely through.

There is a real debate to be had here about the playful use of firearms that Watts places into the kids' hands. There are multiple scenes where the boys point guns at themselves and each other. It's shocking imagery and perhaps dangerous to desensitize kids to the danger. It's also silly to think that 11-year-olds won't see a movie that's rated R. Every kid (who still watches movies) is going to want to see this. While these scenes are hilarious to a generation brought up on the taboo of pointing a gun at your friend, whether or not this is the sort of thing to be joked about is perhaps a healthy debate to have.

Healthy debates not withstanding, Cop Car is a serious joy to watch. Watts has put together a real triumph of nostalgia. It's a cult classic that doesn't just feel like it is trying to be one. But past all that, Cop Car is just a damn awesome movie.

Do you feel this content is inappropriate or infringes upon your rights? Click here to report it, or see our DMCA policy.
Jon WattsKevin BaconSundance 2015Christopher FordJames Freedson-JacksonHays WellfordCamryn ManheimCrimeThriller