Review: VICE, Sexism Is Only Its First Offense 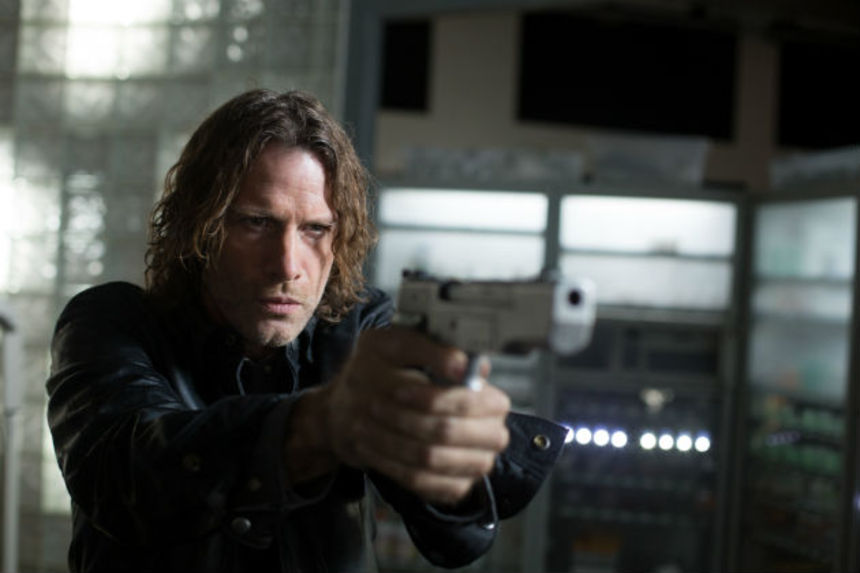 By featuring two scenes of repulsive violence against women in its early going, Vice digs itself into a deep hole.

Theoretically, it's possible that Vice, an ostensible action vehicle driven by Thomas Jane -- with Bruce Willis sitting quietly in the back seat -- will rise up from that stinking cesspool and assert itself as a bold vision about the future of mankind, a future in which men and women are treated (and respected) as equals. Or, at least, prove to be mindful of its sexist attitudes and own up to them, commenting incisively on its broad, foolish prejudices while delivering a lot of violent, visceral eye candy.

Instead, Vice remains in the muck and mire, so blind to its own limited perspective that it doesn't even realize how offensively it plays.

Now, I'm a longtime advocate for action pictures of all stripes and sizes, so I'm well-aware that I've often ignored concerns about racism, sexism, and other legitimate -isms if the action sequences dazzle my eyes and raise my heart rate. And so theoretically -- that word again! -- it's possible that if the action in Vice convinced me otherwise, I might not be sounding off about the discriminatory messages it so proudly displays.

Yet the egregious nature of those scenes appears to be the raison d'etre of Vice Industries, a company that has constructed a "paradise" where people -- read: well-to-do men -- can come and indulge their fantasies. More often than not, as depicted in the film, their fantasies are either extravagantly sexual or sick and extremely violent, allowing them to pummel and punch and shoot women dead and then walk away with no regrets because the women in "paradise" are all "artificials" -- read: robots -- whose memories are wiped clean every day.

Bruce Willis is the owner of Vice Industries, and he has paid off the authorities so he can make his own laws. He patrols his extensive property with his own well-armed guards, who murder "trespassers" -- read: civilians who get in the way -- with impunity. It's a nightmare vision, apparently inhabited entirely by Caucasians, unless I missed a random person of color. Yet it's presented by Willis as some sort of wish fulfillment "paradise," or 'just a little fun,' as he sells it on television, for his presumably wealthy clients. 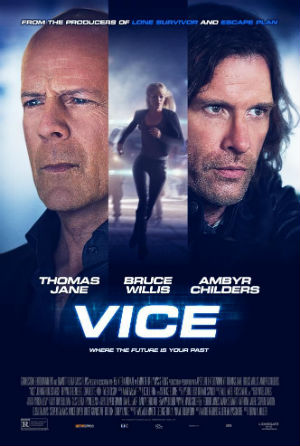 I'm not familiar with the previous work of director Brian A. Miller or writers Jeremy Passmore and Andre Fabrizio, although all three have multiple credits, so it may be that Vice is an aberration. (Passmore co-wrote and co-directed Special with Michael Rapaport back in 2006, which certainly has its fans.) But there's little wit or wisdom on display here, and the dialogue often sounds flat and uninspired.

In part, that's due to the performances, which are also flat and uninspired. The actors are talented so the potential is there; Jane's character falls squarely in a wheelhouse that he's handled with charm in the past, and Willis has played heavies before with some ingenuity. But it comes across as though both showed up on the set each day, were handed scripts, did their level best to remember and deliver their lines, and then went home.

It becomes especially frustrating when contemplating Ambyr Childers in the female lead role. She was extremely effective in Jim Mickle's We Are What We Are; here she plays an "artificial" named Kelly. After suffering extreme abuse one night at Vice, her ensuing memory wipe leaves behind disturbing memories of previous abuse, and she flees into the night. Perhaps because she was directed to act like a "robot," she is stiff and mechanical -- even though "artificials" are meant to have human-like emotions -- and often looks like someone is feeding her lines from off-camera.

What went wrong? Far too many quality low-budget movies have been made to blame the results entirely on limited time and financial resources. But whatever combination of things led to this version of Vice, there is little if anything to recommend about it.

The film opens in limited theatrical release in the U.S. on Friday, January 16. It will also be available to watch via various Video On Demand platforms.

Do you feel this content is inappropriate or infringes upon your rights? Click here to report it, or see our DMCA policy.
Ambyr ChildersBrian A MillerBruce WillisThomas Jane