Destroy All Monsters: (Doctor) Who We Are Underneath 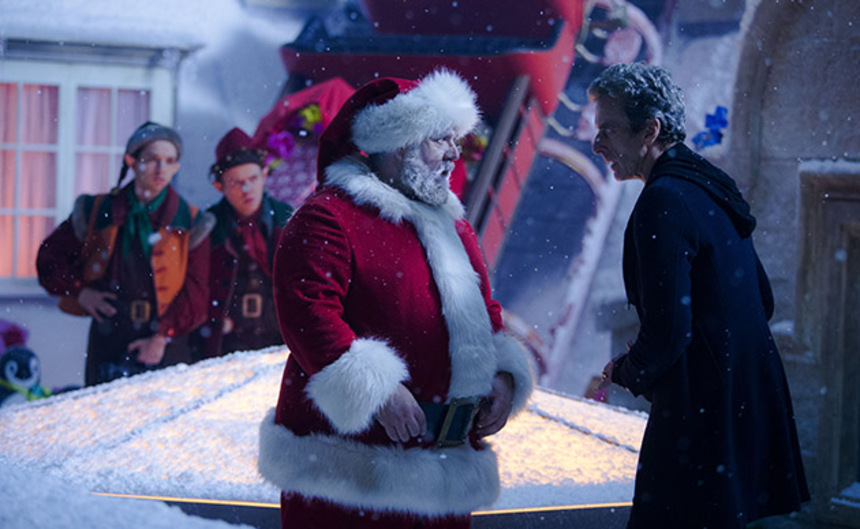 Regeneration, then: as good a word as any. Inasmuch as any new actor in the Doctor Who role is an opportunity to shuffle the deck, and inasmuch as I am generally warm on this show and don't fall down the rabbit-holes of scene-specific nitpick, I was bowled over by the breadth and depth of Peter Capaldi's first season as the Doctor nonetheless. Matt Smith's first year was a season with a common plot; Capaldi's first year is a season with a common point.

A bit of in-canon lead-up: the Doctor Who 50th anniversary special saw the two most recent incarnations of the doctor (David Tennant and Matt Smith) confront a hidden variant from their own past, the "War Doctor," played by the very, very wrinkly John Hurt. Hurt's Doctor was responsible for the death of all the Time Lords, which explains why the subsequent regenerations didn't talk about him much.

Taking the idea a step further, Hurt openly commented on the boyish, Tiger Beat looks of his two successors, and the episode went on to nervously suggest that those looks, themselves, were part of the Doctor's rejection of his greatest crime. He was old, he'd killed his entire species, and the only way he could think to deal with it was to hide in a body that looked like Clara Oswald's boyfriend.

But the Doctor atones in "The Day of the Doctor," and so when - gadzooks! - Peter Capaldi's face comes popping out of Matt Smith's clothes at the end of last year's Christmas special, it seems that the atonement has worked. I had a professor in university who was fond of breaking that word down into its components - "at one ment" - which was, admittedly, a bit of a stretch, but arrives at the meaning: when we atone, we become at one with ourselves. The Doctor has made peace with his component selves. And suddenly, the Doctor looks old again.

Capaldi's Doctor is a back-to-basics Doctor, spooky like he was when I was a kid (even hinting at Tom Baker's terrifying googly-eyes under Capaldi's venerated attack eyebrows), dressed "like a magician" (as opposed to a British dandy or a celery-wearing fop, I suppose), and above all other things, old and alien, as one should be when one is 2,000 and from the planet Gallifrey.

It wasn't just the looks. In "Kill the Moon," the Doctor brightly declares that the fate of the Earth isn't his problem this time, and ups stakes to let the humans figure it out for themselves. In "Mummy on the Orient Express," he uses the humans in a doomed pecking order to research the manner of their death, in order to solve the problem after it's too late to help them. In "Into the Dalek," the Doctor mind-fuses with his robot arch-nemesis and turns out to have so much hate inside him that he kicks off another race-war.

Something else these examples have in common: a things-within-things image system, which persists throughout the season. There's an alien baby inside the moon whose emergence will destroy the earth; there's an ancient soldier within the mummy's wrappings who is carrying out an eons-old war. In "Time Heist" there's a secret at the heart of an impregnable bank, and in "In The Forest Of The Night," all of London is hidden under a vast, planet-wide forest.

In the season's most horrific image, Danny Pink comes back from the dead, entombed within a Cyberman. And in the season's most beautiful, the Doctor is a scared child, cowering in bed, while the "monster" that frightens him is actually his best friend, reaching out to help.

These recurring image connections aren't coincidences, because this is, ultimately, what Series 8 of the rebooted Doctor Who is all about, from its lead character down: who are we, underneath? What has been kept hidden, and now threatens to emerge? What - at the core - are we?

"Clara, be my pal, tell me - am I good man?" the Doctor asks his companion, Clara Oswald, in a much-quoted clip from the second episode of the year. The regeneration has stripped away the artifice, the name-dropping, the Britpoppishness that fuels a thousand Tumblr memes per season. Gone are the neurotic narcissism of Eleven and the affable vanity of Ten. The Doctor's question to Clara seems a tad on-the-nose as a thesis statement, but even as a thesis, it's very soon expanded: the Doctor promptly doesn't care whether he's a good man or not.

The Doctor promptly doesn't even care about conventional notions of "good" or not. In the season finale he will finally abdicate responsibility for human ideas of goodness.

This incarnation of Doctor Who supplants intention and performance with existence and essence - the difference between knowing the path and walking the path, as Morpheus would have put it. The freight of the Meaning Of It All finally collapses and we're left with just the person, and the present moment, making a point we'd all do well to remember. Not for nothing, this happens while the Doctor is standing in a literal graveyard.

That last word in the Doctor's epiphany, "learning," also underscores the other key strength of Series 8, which is the extensive enhancement of the character of Clara (a teacher). With the Doctor's core personality under season-long review, the narrative bias pushes necessarily to Clara, who is just as flummoxed as the Doctor on the true nature of her best friend - and, for the first time in a good long while, less and less interested in being a companion who merely accompanies.

Even leaving aside her season-long romance with Danny Pink, Clara drives stories - and drives decisions - in the majority of the episodes this year, and does so independently from the Doctor. The fact that she can do this is (within the context of the show) down to the fact that unlike the Doctor, she knows who she is and isn't on a long-term investigation of those qualities; and (in the context of the real world) due to Stephen Moffat and the other writers finally escaping the gravity of Clara's "Impossible Girl" mystery and writing her like a real, agented person.

It's a refreshing change, in a season full of them. Call it regeneration or call it rejuvenation, but Series 8 held to a kindly, beautiful idea all the way through: the importance of the true self, and the simple decency possible when the shells and disguises have been stripped away. This Doctor Who is about what happens when we finally stop lying to each other and ourselves and start listening to that single, guiding voice - even if that voice might, by now, sound like twelve.

More about Doctor Who: Series Eight