Review: THE THEORY OF EVERYTHING Looks Into A Fascinating Relationship 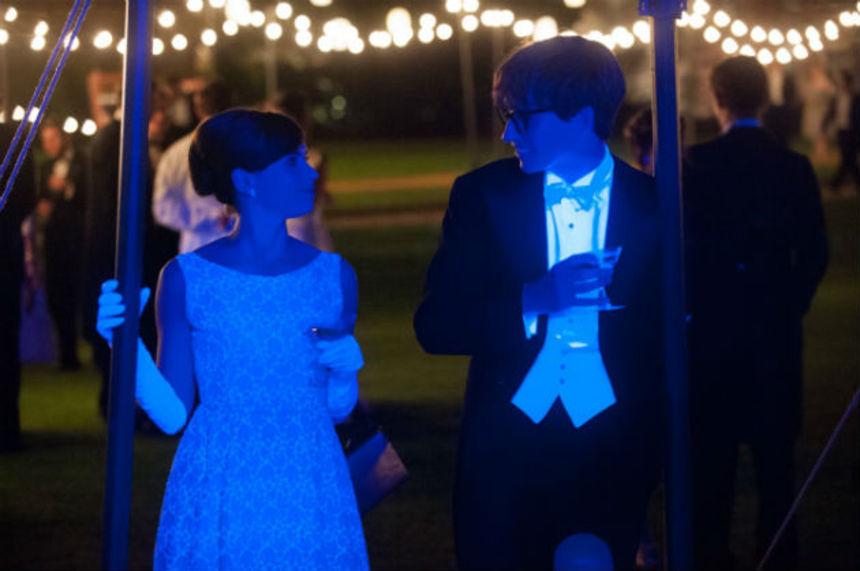 James Marsh's eye for documentary storytelling is a welcome aspect to this biopic about one of the most recognizable scientists to have ever lived.

Stephen Hawking is perhaps known more widely for his physical struggles, synthesized voice, and pop culture appearances than he is for his scientific work, but for many he embodies the brilliant scientist, albeit one who has overcome astonishing odds to survive a debilitating disease and continue to contribute to scientific discourse.

The Theory of Everything is actually quite concise in its focus, following the young Hawking as he enters his doctorate program at Cambridge, and his burgeoning relationship with Jane Wilde. The film traces some of the usual paths of this type of biography, with the added element of physical deterioration that provides the work its most visual indication of the turmoil of the man.

Eddie Redmayne plays Hawking with a conviction that's sure to gain notice, a role that's in some ways superior and more subtle than the rightfully celebrated turn by Daniel Day Lewis in My Left Foot. While far less of an art-drama than that film, Redmayne nonetheless conveys both the physical aspects of his character's affliction, as well as the sparkle in the eye and wry responses to certain storyline aspects.

Yes, this is a gross simplification of real events, as any work of this type often must succumb, but Marsh injects just enough verisimilitude to make it all feel part of an organic whole. The believability, coupled with Redmayne's performance that's eerily evocative of Hawking without ever coming across as an imitation, makes for a fairly extraordinary film. 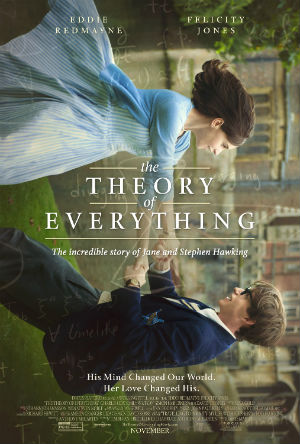 The script by Anthony McCarten injects just the right amounts of both pathos and sardonic comedy to make this far more than a simple hagiography. While some of Hawking's wanderings are slightly toned down, it's clear that he is no saint, and even his work is shown to have some prominent detractors, including,above all, the man himself. Felicity Jones's portrayal of Jane is convincing and complex, and Charlie Cox, David Thewlis, Simon McBurney, and Emily Watson round out the stellar cast.

As a scientific project, Hawking's own theory of everything remains very much a work in progress, an ideal and concise formula that sums up all the messy complexities and contractions currently befuddling our understanding of the workings of the universe. Similarly, as a film The Theory of Everything does well to celebrate the untidy while constructing in its own fashion a more linear statement.

It might not completely cohere, and it certainly leaves out a lot of the prime details, but as a reflection of the greater whole, and a look into a fascinating relationship and the work of a man celebrated around the world, Marsh's latest film walks a fine tightrope, providing an engaging, provocative, and accessible view at these remarkable individuals.

Review originally published during the Toronto International Film Festival in September 2014. The film opens in select theatres in Canada and the U.S. on Friday, November 7, and then expands in the following weeks. Visit the official U.S. site for more information.

Do you feel this content is inappropriate or infringes upon your rights? Click here to report it, or see our DMCA policy.
eddie redmaynefelicity jonesjames marshstephen hawking

More about The Theory Of Everything